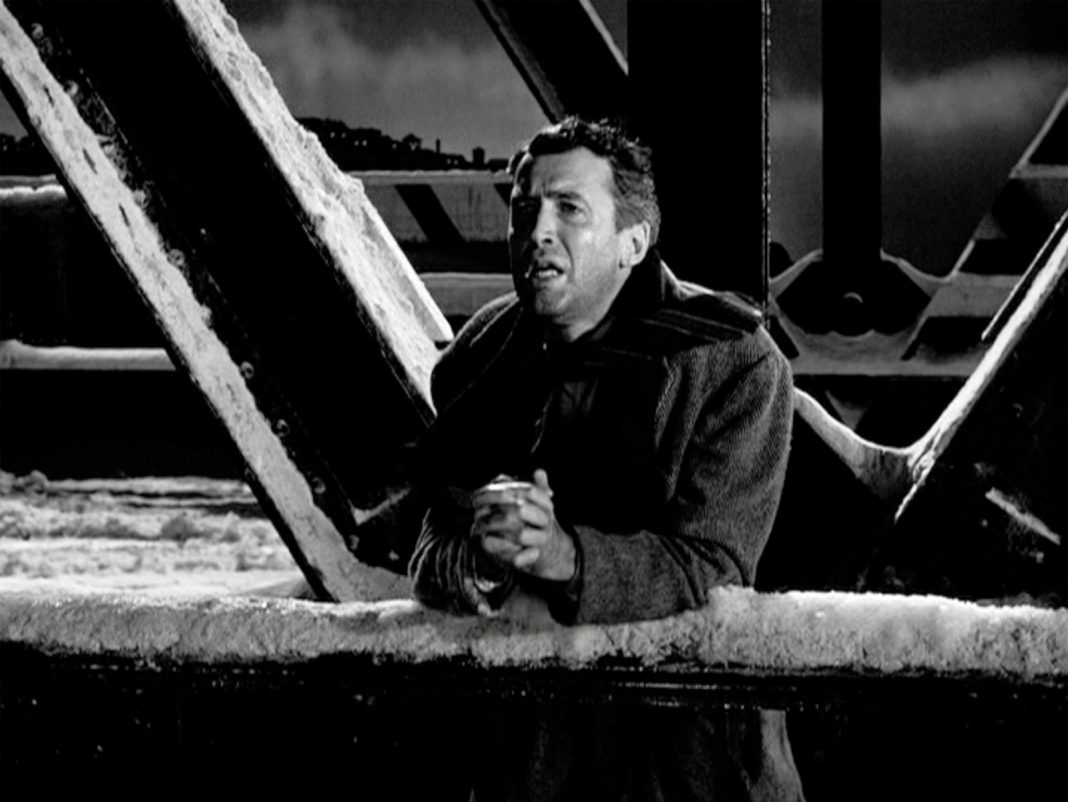 It’s a Wonderful Life is a movie with incredible staying power. It’s a holiday film that reaffirms the values of hearth and home and the importance of relationships. The main character, George Bailey, is a classic Frank Capra every-man. But it’s also a film that shows a man deeply troubled and caught between two different and warring sets of values as he reconsiders what Samuel Johnson called the “choice of life.” One reason we keep watching It’s a Wonderful Life, long after the appearance of Elf, may be that the choices presented to George Bailey are the same ones presented to all of us today, especially people from small towns and out-of-the-way places.

We first meet George Bailey as a boy from Bedford Falls. At a young age, he holds on tightly to responsibility with one hand and ambition with the other. He has an after-school job, but he wishes every day he had a million dollars. He loves coconuts because they come from far away and he considers himself an “explorer.” It’s 1919 and he sings his life to the tune of a hit from the era, “How ya gonna keep ‘em down on the farm”—only he doesn’t need Paris to hear the siren song of the open road. But neither is he deaf to the needs around him. He’s not too caught up in his dreams to notice when Mr. Gower, the pharmacist, is distraught from grief and may accidentally poison someone. And he’s not too self-interested to let it happen, even when it means being slapped around.

George Bailey grows to physical maturity believing that the three most exciting sounds in the world are anchor chains, plane motors, and train whistles. In his twenties, he is determined to shake the dust of his “crummy little town” off his feet and “see the world!” After four years working at his father and uncle’s small-time Building & Loan, he has enough money for an adventure and college. He needs a suitcase not for one night, but “a thousand and one nights.” He has no plan to return to Bedford Falls permanently. He wants to “do something big, something important.” He plans to build airfields, sky scrapers, bridges a mile long… and make a million dollars before he turns thirty. And if he doesn’t get away, he’ll “bust.” In 2009, Patrick Deneen observed that George Bailey has a dark side. He is “the optimist, the adventurer, the builder, the man who deeply hates the town that gives him sustenance, who craves nothing else but to get out of Bedford Falls and remake the world.” When he looks at the town map, he imagines it improved by subdivisions.

What ails George Bailey is nothing other than the spirit that animated most of America’s past. He wants bright lights and big cities. He wants fame and fortune. He believes there is value in being rich. He believes in building on the monumental scale. He believes that adventure is out there. It was the same spirit that drove Robert Moses to remodel New York, that motivated Henry Ford, that inspired The Great Gatsby, and turned Steamboat Willie into Mickey Mouse. We might say that George Bailey had caught the same dream that so many twentieth century Americans came down with. The values driving George Bailey were scattered liberally across the country. And they have taken deep root. They are the same dreams that inspire many people today to move away from home and start new businesses and wander the earth.

While George is pulled away from Bedford Falls by dreams of worldly success, he is pushed from his home by the town’s flaws. On this side of the twentieth century, it’s easy to see small towns through the eyes of Walt Disney and his Main Street, USA, inspired by childhood memories. But Bedford Falls is not completely idyllic. It is part Christmas Carol, with an unrepentant Scrooge in Mr. Potter, the cruel man who owns the bank and half the town. Potter wants to keep “the rabble” thrifty and hardworking by never giving them a chance to rest their heads in homes of their own. The only meaningful opposition to Mr. Potter is George Bailey’s old man and his family’s Building & Loan.

In our narratives about home, we can become romantic. But like we see in Sherwood Anderson’s Winesburg, Ohio, or Thomas Wolfe’s Look Homeward, Angel, small towns can also be filled with loneliness and frustration. Any choice of where to live is an acceptance of certain limitations. And not every hometown is a harbor from corrupting values. It’s Potter who calls George’s father a “failure,” not a city slicker from far away. And plenty of small towns have their Mr. Potter or a corporation equivalent. Some small towns are company towns and the people get paid in scrip. On the eve of George’s departure for college, his father agrees the town has nothing for a man who “won’t crawl to Potter.” He tells George, “You get yourself an education and get out of here.”

Of course, George never does get that education or get out of Bedford Falls. His father has a stroke, and George assumes leadership at the Building & Loan. George takes on his inept Uncle Billy as a business partner. He pays for his brother Harry to go to college instead of himself. Harry becomes a football star, marries, and moves away for a good job. George doesn’t even get to go on his honeymoon when he marries, because he has to save the Building & Loan from a run on its funds started by Potter. Instead of building skyscrapers, he becomes the resident of a house he once said he “wouldn’t live in as a ghost.” He spends his time and money helping others.

When World War II comes along, everyone else lives the dreams George Bailey always had. Sam Wainwright gets rich, making “a fortune in plastic hoods for planes.” Bert and Ernie get adventure: Bert fights in North Africa, Ernie parachutes into France. Harry is a Navy pilot, a hero who shoots down fifteen planes and wins the Congressional Medal of Honor. George is 4F and he fights “the Battle of Bedford Falls,” with the women and old men left behind. For George, the world seems to be leaving him behind.

While it will ultimately celebrate the virtues of small town life, It’s a Wonderful Life reminds us that people don’t always stay in small towns because they can’t imagine being anywhere else. And not everyone who stays does so enthusiastically. George Bailey has always done the right thing. But he’s done it partly out of instinct and partly out of obligation. He feels a sense of responsibility toward everyone around him. His father thinks he was “born older.” He saves his brother from drowning, and he repeatedly saves the Building & Loan because he can’t imagine the world without them, but he’s not living the life he imagined for himself.

George Bailey feels like a failure. He has achieved little of what the world seems to value and almost none of what he wanted. Around him others are becoming rich and famous and “successful.” He has a broken banister and kids who point out the neighbors’ new car. His life is a constant struggle against Potter and, when Uncle Billy loses the Building & Loan’s money, George Bailey does finally “go crawling to Potter” just as he always feared he would if he stayed in town. He is so profoundly discouraged that he considers suicide.

George Bailey believes he is “worth more dead than alive” until an angel appears and gives him the “gift” of having never been born. He is free of all his obligations. But before he hits the open road, he sees what has become of his town without him. What he sees shocks him and, ultimately, leads to his redemption. Most of his friends and family are much worse off. Mr. Gower is an abused drunk, with a prison record, who stumbles around town. Uncle Billy is in the insane asylum. Harry never made it to college or saved anyone in the war because he died in childhood. George’s mother is a bitter old lady who runs a boarding house without any hospitality. His wife… is an “old maid.”

In Frankenstein, the monster declares that “misery has made me a wretch.” It was being unloved that made him a monster. There is a great truth in that. But It’s a Wonderful Life highlights another truth. George always knew he was loved; everyone always tells him how much they value him. But he didn’t realize the depth of his love for others until he saw their lives without him. The suffering of others took his focus off of himself. He begs God, “Get me back. I don’t care what happens to me. Get me back to my wife and kids.” He would rather be deaf in one ear and miss the war than have his brother miss it all. He would rather be broke and covered in kids than see Mary alone. He would rather go to prison than see Uncle Billy in an insane asylum. What he once did from a sense of duty, now he desires to do. He would now willingly give up his dreams to save Bedford Falls from becoming Pottersville.

George is reborn in a profound way. And in its own way, It’s a Wonderful Life emphasizes some profound truths. Kindness matters more than fame. Staying home can be noble and heroic. “No man is a failure who has friends.” But it also emphasizes the importance of making a conscious “choice of life.” It wasn’t enough for George to stay in Bedford Falls and do the right thing; he needed to choose which values to embrace and which to reject. It is the same choice that presents itself to many of us today. George has chosen to be a “failure” in the eyes of the Potters of the world, but he no longer believes that being self-sacrificial means being unfulfilled. Now George can finally believe his brother Harry, who declares him, “my big brother George, the richest man in town.”