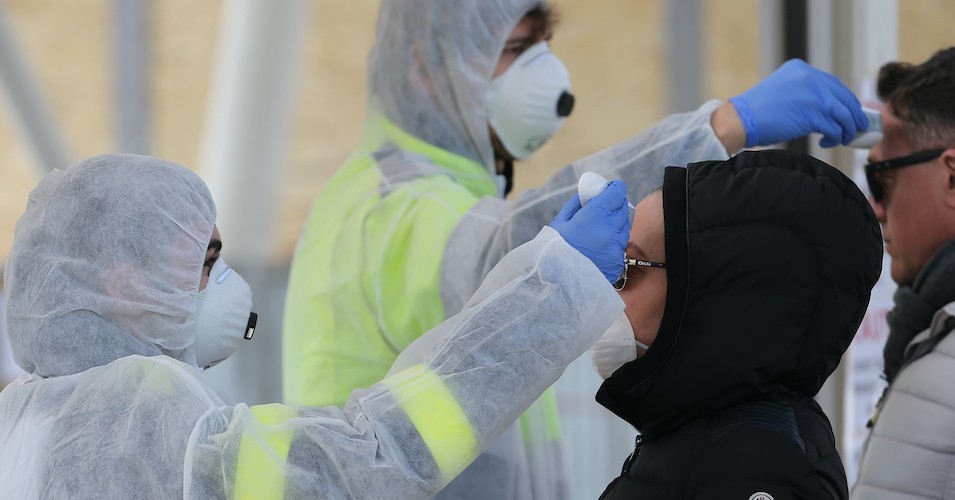 Once again a crisis of expertise among elite Americans. The last one — whether evangelical elites (an oxymoron in my estimation) were out of touch with ordinary born-again Protestants — in the context of a pandemic looks like a debate during a campaign for student body president at Ben Franklin Junior High. Citizens of the world are hearing regularly from epidemiologists, biologists, economists, computer engineers, and statisticians about illness, treatment, computer models, deficits, even the correct fabric for masks.

Some skepticism has emerged and some of it reflects liberal and conservative political outlooks, with people to the Left thinking often apocalyptically about COVID-19 and folks to the Right assuming a skeptical outlook about government’s response to the crisis. Of course, the wrinkle in this somewhat partisan reaction is that people Left-of-center tend to put very high stock in a federal government official whose chief executive is a man liberals (and more) despise. Hate POTUS; love his Director of the National Institution of Allergy and Infectious Diseases.

Some observers have responded to these different estimates of the science, the computer programs, and the graphics by doubling down on expertise. One commentator in particular has expressed a fear that the current crisis, and opposition to the lock down and the officials responsible for it, will undermine respect for public health officials.

Governor Mike DeWine has received some positive coverage for his early response to the virus. The public health expert closest to him is Amy Acton. Here are her expertise bona fides:

Dr. Acton came to ODH from The Columbus Foundation where she served as community research and grants management officer and focused on community leadership and non-profit effectiveness. Prior to joining The Columbus Foundation, she served as assistant professor-practice at The Ohio State University (OSU) College of Public Health. She also previously served as visiting faculty professor at the Center for Injury Research and Policy at the Research Institute at Nationwide Children’s Hospital, adjunct professor at the OSU College of Medicine and Public Health, and director of Project L.O.V.E. (Love Our Kids, Vaccinate Early) in Columbus.

Those credentials suggest competency for lots of things but perhaps not for making epidemiological and economic calculations during a pandemic.

In Minnesota, where Governor Tim Walz is taking some flack for perhaps overestimating the number of cases and deaths afflicting his people from COVID-19, Jan Malcolm is Commissioner of the state’s health department (“commissioner” does not sound very scientific or authoritative):

Prior to being appointed commissioner, Malcolm was an adjunct faculty member at the University of Minnesota School of Public Health, where she co-directed a national research and leadership development program funded by the Robert Wood Johnson Foundation. Earlier she also helped develop initiatives to strengthen the nation’s public health system as a senior program officer at the Robert Wood Johnson Foundation.

It is unclear whether Malcolm, whose terminal degree is a B.A. from Dartmouth, is giving Walz instruction about public health policy. It seems fair to assume she has a seat at the table. But does she have the expertise?

One last example comes from the much reported state of New York where Howard A. Zucker is the Commissioner of Health. Competing with Governor Andrew Cuomo is a challenge even for President Trump. So it is understandable that Zucker has not received much attention from the press, though he was in the news two weeks ago for advising Americans not to follow the White House’s instruction about self-quarantining if they had recently visited New York City. Here are Zucker’s credentials for making that call:

A native of the Bronx, Dr. Zucker earned his M.D. from George Washington University School of Medicine at age 22, becoming one of America’s youngest doctors. He is board-certified in six specialties/subspecialties and trained in pediatrics at Johns Hopkins Hospital, anesthesiology at the Hospital of the University of Pennsylvania, pediatric critical care medicine/pediatric anesthesiology at The Children’s Hospital of Philadelphia, and pediatric cardiology at Children’s Hospital Boston/Harvard Medical School.

Before joining the state Department of Health in September 2013, Dr. Zucker was a professor of clinical anesthesiology at Albert Einstein College of Medicine of Yeshiva University and pediatric cardiac anesthesiologist at Montefiore Medical Center in the Bronx. He was an adjunct professor at Georgetown University Law School, where he taught biosecurity law.

His vast experience in public policy began as a White House Fellow under then-Health and Human Services Secretary Tommy Thompson. Subsequently he became the Deputy Assistant Secretary of Health where he developed the nation’s Medical Reserve Corps, which today is run by the U.S. Surgeon General and includes more than 200,000 volunteers across nearly 1000 programs. He also worked on the development of the initial SARS preparedness plan, the anthrax crisis, and the National Institutes of Health autism summit, and led a multidisciplinary team on the issue of tissue engineering/regenerative medicine. Dr. Zucker advanced his public policy experience while serving as an Institute of Politics Resident Fellow at Harvard Kennedy School and later as a Presidential Leadership Scholar.

That resume suggests not much actual expertise in the science of epidemiology or the study of viruses. It does indicate someone with lots of experience in administration. What Zucker brings to the table when advising an executive may have much more to do with the experts who are in his contact list on his smart phone. But how much expertise on the precise questions that Cuomo and his staff debates is another question.

And for what it’s worth, here are the credentials of Dr. Deborah Birx, the expert with whom Dr. Zucker disagreed:

Ambassador Birx is a world-renowned medical expert and leader in the field of HIV/AIDS. Her three-decade-long career has focused on HIV/AIDS immunology, vaccine research, and global health. As the U.S. Global AIDS Coordinator, Ambassador Birx oversees the implementation of the U.S. President’s Emergency Plan for AIDS Relief (PEPFAR), the largest commitment by any nation to combat a single disease in history, as well as all U.S. Government engagement with the Global Fund to Fight AIDS, Tuberculosis and Malaria. Serving as the U.S. Special Representative for Global Health Diplomacy, she aligns the U.S. Government’s diplomacy with foreign assistance programs that address global health challenges and accelerate progress toward: achieving an AIDS-free generation; ending preventable child and maternal deaths; and preventing, detecting, and responding to infectious disease threats.…

Ambassador Birx has published over 220 manuscripts in peer-reviewed journals, authored nearly a dozen chapters in scientific publications, as well as developed and patented vaccines. She received her medical degree from the Hershey School of Medicine, Pennsylvania State University, and beginning in 1980 she trained in internal medicine and basic and clinical immunology at the Walter Reed Army Medical Center and the National Institutes of Health. Ambassador Birx is board certified in internal medicine, allergy and immunology, and diagnostic and clinical laboratory immunology.

The issue is not the the health care experts versus the ordinary American who doesn’t like the way this shutdown is going. It is actually a question of expertise worthy of the power invested in state and federal officials to change life as we know it. No offense to any of the experts listed above, I am pretty sure I could find professionals in their fields with even better credentials and whose advice we might take over theirs. It’s not as if cancer patients are accustomed to saying that the county hospital in, say, Erie County Pennsylvania has experts so there’s no reason to see what the doctors at the Mayo Clinic have to say. If the country had a public health clinic the equivalent of the Mayo, could any of these public health officials in Minnesota, Ohio, or New York State get an appointment there?

Or more likely, is it the case that these people excel in administration, running offices, filing reports, preparing budgets? All of those tasks are essential to a well-run government. But they are not on the order of making determinations that could change the history of the world.