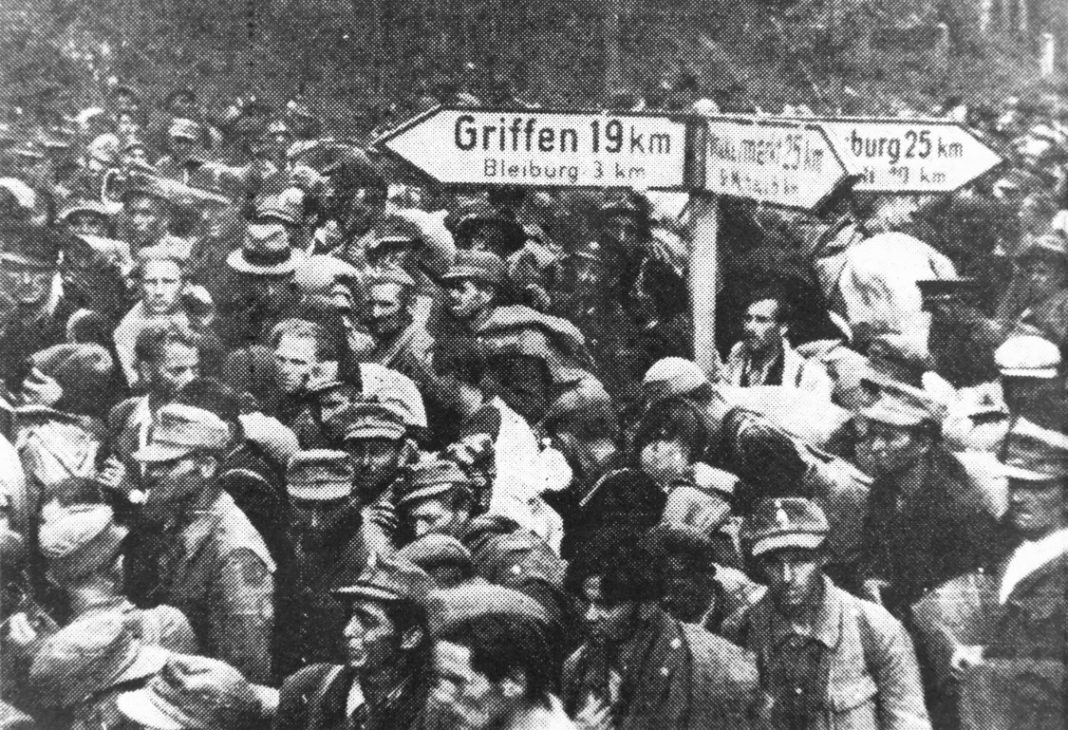 Cheverly, MD. On May 20, 1945, days after the end of World War II in Europe, my mother’s Aunt Anne was shot in both legs by a Communist gunman in Yugoslavia and left for dead. She wasn’t dead, but she couldn’t move—one ankle shattered, her other leg ripped by six bullets. She was 19.

She lay alone for hours, abandoned in a field. Red Cross medics found her, but Yugoslav Partisan soldiers commandeered the Red Cross’s wagon and left Anne behind. When a farmer with a buggy took her to a makeshift clinic, she was denied treatment on account of her Ukrainian-German ethnicity and taken to soldiers’ headquarters for interrogation. She succeeded in convincing her Communist captors that she was not a traitor to the Communist cause. So they let her live.

I first heard Anne’s account in full a decade ago. Anne and her daughter Doris visited my home in Berlin, where we lived for a time. From our living room sofa, she narrated her story to my three children, pulling up her pantleg so they could touch her bullet wounds—six pockmarks in her calf and shin.

Anne was about 85 then. The stylish blonde curls I remembered from earlier years had wilted to a frizz. Yet she still had her sharp mischievous eyes, quick smile and, most memorable, her riotous laugh. She and Doris, who’d traveled from Canada to Germany to visit family, talked of staying up late in hotel beds giggling like teenage girls. Daughter blamed mother—instigator, prankster—for the late-night ruckus. I listened in fascination to these two laughing at their memories of shared laughter. With young girls of my own, this picture of mother-daughter friendship intrigued me. Even more, Anne herself intrigued me—now with a withering body, still bearing the marks of early trauma, yet alight with inner life.

“Laugh,” Wendell Berry’s Mad Farmer urges in his “Manifesto.” “Laughter is immeasurable. Be joyful though you have considered all the facts…Practice resurrection.”

Anne’s is a resurrection story.

That day in 1945 was not the first time Anne was left for dead. At her birth, two months premature, the midwife predicted that she wouldn’t live through the night. So her mother put her in a shoe box under the bed to let her die. “But in the morning she was still grunting,” Anne recalls her mother saying, “so I decided to give her something to eat.”

Anne was the youngest of seven, born in Ukraine in 1926—not long after the Bolshevik Revolution, civil war, typhus epidemic, and famine struck in fierce overlapping succession. The times did not lend themselves to tender infant care.

Anne’s German Mennonite family suffered brutal treatment under the Soviet regime. Neighbors and family members, including Anne’s three brothers, were arrested and sent to Siberia. In 1943 she fled west. At war’s end she found herself at the border between what is now Slovenia and Austria. With many others she tried to surrender to the British to avoid capture by the Soviets. All—surrendering Croatian soldiers as well as innocent refugees—were turned back at the Austrian border and forced to march east. Between 50,000 and 100,000 were slaughtered by Yugoslav Partisans in the woods. This was the Bleiburg Repatriation, more aptly called the Bleiburg Massacre. Anne was following orders, marching east with the others, when a soldier opened fire on the crowd.

Later that day, after her interrogation, she finally received medical treatment in a hospital. But she’d not yet recovered when she was put on a train and sent to a displaced person’s camp. The trip took days. Her crutches were confiscated, though she couldn’t walk. So at each stop two girls made a litter with their arms and carried her off the train so she could relieve herself. By the time she arrived at the camp, Anne had given herself up for dead. She collapsed on a blanket and refused food. Somebody fetched a doctor. Alarmed at her swollen, infected wounds, he hoisted her on the front of his bicycle and pedaled her to a hospital.

The doctor who saved her legs—operating, then overseeing weeks of therapy—also saved her life. Telling her the camp where she would be sent was full of pregnant women who’d been raped by Russian soldiers, he claimed her as his assistant and forged documents for her passage to Austria. There she begged work from a farmer’s family in exchange for room and board, cleaning the pigsty and washing the family’s clothes with water from a frozen pond.

She did it all—the death march and recovery, escape to Austria and early morning winter farm work—with just the clothes on her back. When she washed her dress in the pond water, she wore only her coat. She overheard the Austrian farmer’s wife bragging to a neighbor, “My Anna is never cold.” The woman probably believed this. In fact, Anne was always cold. She just didn’t complain.

I grew up hearing survival stories. Like Anne, my grandmother, mother, and her siblings all fled Soviet Ukraine under desperate conditions. They found shelter in refugee camps in Austria until, with help from the Mennonite Central Committee, they emigrated to Canada. They arrived penniless and labored ceaselessly—in fields, in others’ homes—to pay back the money they owed for their passage. Then they saved to buy a house and afford university educations. Their stories share similar themes: poverty, starvation, trauma; grit, God’s grace, survival. They made it out alive—though not without scars.

Growing up I regarded them as eccentric, too “foreign” to appeal to my provincial American tastes. As an adult I appreciate their remarkable perseverance. I recall their generosity, frugality, and contentment. Not all, though, were blessed with joy; for some, the wounds from childhood ran too deep. Thus Anne’s effervescence is striking.

When I was young we would visit her in the bank in Abbotsford, British Columbia, where she worked. To me there was no more glamorous job. Her thick accent and blonde hair evoked Zsa Zsa Gabor, the only foreign actress I knew. When I grew up I wanted to be beautiful and charming, to laugh loudly and work in a bank like Aunt Anne.

I’ve wondered since if her liveliness and laughter at times masked heartache.

While working on the farm in Austria, Anne sent letters all over Europe seeking her family. One day some neighbors from her Ukrainian village appeared at her door. At first she did not recognize them in the low light of dusk, their faces changed by war. They took her to the camp where her mother was staying. After the initial relief of reunion, it was not a happy pairing. Her mother was cruel and controlling. She told Anne she prayed her daughter would never find a husband; she did not want her youngest to leave her. In Canada, Anne married hastily to escape her mother’s tyranny. Ralph was negligent and abusive and eventually left her to raise their three children alone.

Perhaps there were whole years no laughter escaped Anne’s lips—as the Hebrew prophet Joel called them, “years the swarming locusts have eaten.”

Yet the arc of her life still bent toward joy. That night in Berlin when she first shared her story, and again last month by phone from her retirement home on Vancouver Island, Anne described how, lying alone in the field after the soldier gunned her down, she prayed. Immediately she felt the presence of Christ beside her. She knew, come rescue or death, that all would be well.

I imagine terror, not joy, was a close companion that day. Yet perhaps the peace Anne felt lying in the field—a gift of God, impossible to conjure by merely human means—was joy’s obverse. Perhaps Anne could see beyond the violence and brutality all around her to the unseen realm.

“Laugh,” Berry’s Mad Farmer counsels, “Be joyful though you have considered all the facts.” But don’t some facts—the death toll in post-war Europe, for instance, or in our pandemic-stricken world today—warrant lament instead? In the face of tragedy, isn’t laughter the mark not of wisdom but of insanity?

In another of Berry’s poems (2012 Sabbath Poems XXI), the Mad Farmer perceives in childhood, and with childlike faith, a vision of the birth of Christ and its attendant heavenly celebration. It is “the gift of a moment” and thereafter must be held and tended, even in the face of human calamity—“the blasted mountains, the killed children, the bombed villages haunted already by the hurting bodies of their dead.” The language evokes what Anne must have seen of war and its aftermath. And so too (I imagine) does his vision—“Beyond and beyond”—higher and deeper than the brutal facts of war—“is the shepherd-startling, ever-staying light.” The Mad Farmer, a pilgrim, sets out “toward the almost forgotten light.”

I believe a vision of wellness rooted in eternity—in Christ—is what sustained Anne’s joy in the midst of profound suffering. I might even call that vision Resurrection: for the Christian, a unique historic event that begets a future eschatological hope. In the parlance of the Mad Farmer’s “Manifesto,” a daily subversive practice that runs contrary to the systems and values of this world.

At 94, Anne reports that her hearing is going, as well as her sight—so during the coronavirus quarantine neither reading nor television offers much comfort. But she laughs as she tells me this, calling to mind a description of the excellent woman of Proverbs 31: “Strength and dignity are her clothing, and she laughs at the time to come.” Seventy-five years ago, lacking even a change of clothes so she could launder her dress, Anne was endowed with a habit—a word with an apt double meaning—more elemental than clothing: a character that enabled hopeful perseverance. A habit of laughter that has sustained her these many years. A habit of joy.

Interested readers can explore Anne’s first-person account and uncover her family’s stories of surviving famine, war, and the Soviet Gulag.