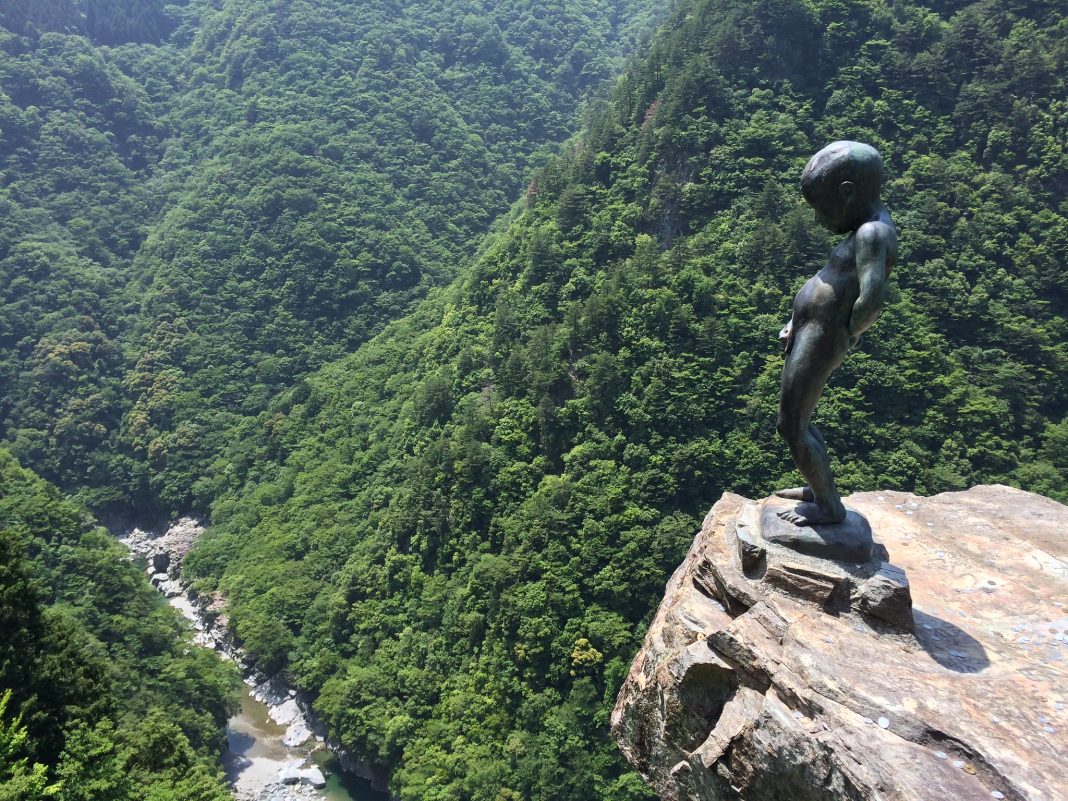 Oak Ridge, NC. As I write this, workmen are uprooting my yard for reasons only those who’ve lived at the intersection of septic tanks and large families will appreciate. My three-year-old, who’s been shadowing them with a little toolbox clutched in his fist, walks to the edge of our deck, wiggles down his pants, and pees on his mother’s pansies. The workmen chuckle in approval. Peeing outside is what men do.

The singular case isn’t mysterious: The boy pees outside because he’s watched me vitaminize our compost piles since he could walk. I’ve had to caution him and his twin brother to pee elsewhere until they’re taller; copperheads like the camouflage of shredded leaves. So my toddlers pee in the garden, they pee on volunteer saplings, they pee on my truck tires. Last week I had to shout out a window at them not to pee on each other. If only the weather had turned sooner, I might have forestalled the septic work.

If my youngest boys are the Lamarckian case, my oldest sons—now 20 and 18 years old—evoke Rousseau. When they were very young, we lived in a close-packed neighborhood. There was nowhere to clandestinely pee outside in our suburban panopticon. My chief sense memory from that period is a feeling of full-bladdered claustrophobia.

Those boys, however, not yet civilized into relinquishing one of man’s greatest powers, peed with abandon. They made pictures on the sidewalk, they aimed at our kitchen windows, they terrorized neighborhood cats. I recall looking out a window early one evening, as our neighbors who worked outside their homes were returning, to see my boys standing at the edge of our street, pants at their ankles, little buttocks clenching as they tried to hit the tires of passing cars.

That’s the moment I realized boys are best raised apart from toilet people. Sigmund Freud would certainly disapprove; he viewed toilet training as an extension of the key advance in civilization that occurred once primitive males stopped asserting dominance by peeing out one another’s fires. People of the Toilet, Freud would insist, are the civilized ones. The male propensity to pee outside, then, must be a civilization-threatening reversion.

I’m inclined, however, to think exactly the opposite. Observing the evolution of my own six sons, I’m convinced we outdoor micturators are, if not best-suited to dwell in what now counts for civilization, the ones who establish it.

Take farming, which has a firmer claim on the word culture than anything emanating from New York City. I’ve never known a farming man who doesn’t pee outdoors. One of my favorite books on permaculture, The Resilient Farm and Homestead, evangelizes outdoor peeing as a way to return nitrogen and other nutrients to the soil while reducing how much we tax water and sewer systems. Scientific American and Modern Farmer agree.

Every bibliophile’s favorite farmer, Wendell Berry, also advocates outdoor peeing. Indeed, you can’t read The Unsettling of America without concluding that peeing outside is a moral imperative. His fictional characters, faithful stewards of the earth that they are, also pee outside. As for Freud’s theory, Berry derides it as the musing of an academic who understood neither the dynamics of fires nor the limitations of penises.

You can’t mention fictional characters peeing without discussing the imp most widely associated with mischievous urination: Calvin of Calvin and Hobbes. Despite the ubiquity of those godawful decals—Calvin peeing on a sports team logo, Calvin peeing on the name of a politician, Calvin peeing on the number of a NASCAR driver—never once did Bill Watterson draw his beloved character urinating. To this day, Watterson refuses to sanction these abominations. His disapproval aside, displaying them in South Carolina can get you ticketed.

Artistic renditions of outdoor peeing aren’t just an American thing, nor are they recent. In some cases they have a utilitarian purpose. When folks in Japan built a statue of a boy peeing off a 200-meter precipice overlooking a river, there was some hope it would block actual boys from taking a dangerous but epic piss themselves.

Meanwhile some people in Brussels, not satisfied with the fame of Mannekin Pis, a 400 year-old statue of a boy peeing into a fountain, decided to democratize things by erecting statues of a girl squatting in an alley, and a stray dog peeing on a street corner. The Czechs brought pissing statues into the dystopian future with two statues of men who write literary quotes with their pee streams. You can even text them phrases they’ll pee for you.

Still, these representations are only clever because nowadays most city people don’t pee outdoors. As American cities drift further into decay, the peeing statues lose their zing. San Franciscans don’t need Mannekin Pis when they’ve got an army of pisseurs inhabiting their streets. In an ironic twist on Andres Serrano’s “Piss Christ,” it’s now our cities in the jar, and these broken, shambling icons of Christ are supplying the fluid.

It’s urban breakdown—declining civilization, in other words—that’s imparted to outdoor peeing a negative, even sexually deviant connotation. In some localities, urinating in public view—which includes your own property—can get you not only jail time, but space on a sex offender registry. Oddly enough, there’s a compassionate necessity defense for homeless people charged with this crime—they have nowhere else to pee. Before you start sprinkling your tomatoes, on the other hand, you’d best confirm your property-line trees have sprouted enough foliage.

Perhaps because our European cousins cut short their puritanical phase, pissing scofflaws are handled more lightheartedly there. In the U.K. city of Brighton, they hand you a mop and make you clean it up yourself. Get caught peeing on longstanding buildings in Chester, and they make you take a history class. (Texans are less forgiving; peeing on the Alamo can land you a felony.) The Germans, meanwhile, have cottoned to a more hilarious yet punitive solution: Hamburgers are painting walls with a textured coating that makes urine splash back onto the pisser.

Most forward—actually, backward—looking are the Parisians, who’ve installed open-air urinals in highly-pissed locales to capture the offending liquid for fertilizer. Many Parisians are outraged, suggesting perhaps some latent French cultural bias against urine. It was a Frenchman, after all, who smashed Serrano’s crucifix-marinating spectacle to bits.

If the essence of satanism is to take what’s pure and profane it, this seems a decent way to understand what the urban and urbane have done to outdoor urination. To the defiled and unbelieving, the Bible says, nothing is pure. But as for we Godfearing men, why have we persisted in peeing outdoors well after the advent of outhouses and toilets?

Given the collapse of agricultural work, peeing for fertilizer, or even out of convenience because the nearest toilet is 40 acres away, can only explain a few barrelfuls of our nationwide deluge. The “marking his territory” explanation, a commonplace even Dear Abby once resorted to in her counsel to a distraught wife, is confounded by basic biological and anthropological facts.

To grasp why we pee outside, one must recollect one’s own childhood.

You’re outdoors, the sun is shining overhead, and you’re engrossed in what is neither work, nor play, nor (that most execrable of terms for childhood endeavors) “activity.” You don’t realize you have to pee until it wells up within you like an epiphany. Being a child, you don’t have to pee until you have to pee. And then, well, YOU HAVE TO PEE.

And so, mercifully untainted as you are by Manichean distinctions between work and play, indoors and out, propriety and necessity, you know intuitively that it is meet and right to pee in this very spot. And given your particular equipment, it’s incredibly easy. So you whip it out, and no matter what parents or siblings or friends and neighbors have to say about it, you know, deep in your thrumming little heart, that the Lord Almighty sees the work of your body, and it is good.

Why do we men pee outside? Because while God has gifted us with a great many diverse blessings, He also made our streams arc high. And when we pee outside, we feel His pleasure.