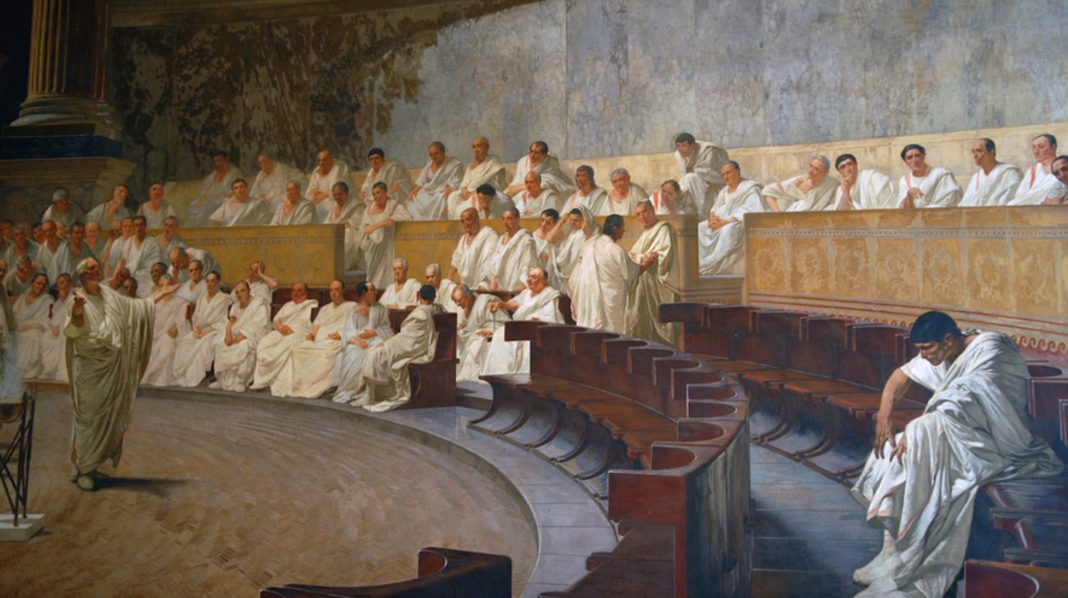 New York, NY. COVID-19 has given the world’s most sophisticated nations a glimpse of premodern life, where uncontrollable plagues could unexpectedly sweep through the land, dealing out death and destroying the livelihood of survivors. Italy’s tragic status as one of the worst-hit nations is a reminder of its predecessor, the Roman Republic, which endured dozens of epidemics in a history that lasted from 509 to 42 BC. Rome’s survival amidst so much death and disease shows how epidemics, both biological and political, threaten republics.

Few people knew the Roman Republic better than Titus Livy. Livy wrote a monumental history of Rome, and what survives of his 142 books tells the story of Rome’s perseverance through many crises, including epidemics. Livy also extensively employed the metaphor of civic diseases. He had personally witnessed the republic’s fall and believed the public body had become so ill in its final days that it didn’t have the strength to take the cures that might save it.

So what did epidemics look like for our ancient republican counterparts? How often did they occur? How did they impact civics and the lives of citizens?

Romans would expect to see a plague at least once a decade and sometimes several times a decade or over several years. The 430s, for example, saw recurring outbreaks, with a vicious cycle of bad weather, disease, and famine making it exponentially worse than previous outbreaks. Another particularly long bout occurred in the 170s. People were dismayed by the length of the pestilence, especially because it was killing off leading citizens and crippling the republic’s ability to function.

Any time Livy details a plague’s effects, he describes scenarios familiar to Americans today. Elections are disrupted. Political processes are stalled. Panic and superstition abound. The longer the epidemic lasts, the more the economy suffers, with famine and shortage setting in from bad crop returns.

Sometimes an epidemic disrupted peace and prosperity. At other times it added to other woes like war or domestic strife. Pestilence always endangered Rome’s national security given that its citizen-soldiers were already balancing civic duties with managing farms. Epidemics could topple this balance.

Wise statesmanship could mitigate their effects but only partially. Elected officials bought grain from abroad or took other measures to assist, but oftentimes an epidemic’s consequences were outside their control. A pestilence in 412-411 presented the safety/economy dilemma Americans are hotly debating today. People prioritized caring for the sick over tending their farms. Lives were saved, but the resulting crop failure proved worse than the disease. Only quick action by the magistrates to import grain averted a complete catastrophe.

Another example of critical decision-making occurred in the midst of Rome’s fight for survival against Carthage. In 205 an epidemic struck both sides in southern Italy. The Roman commander, already ill himself, recommended disbanding the army because he feared if he left them in the camp not a single man would survive. He quickly dispatched a letter to the Senate, which approved his decision to implement this ancient form of social-distancing.

As these last examples illustrate, Rome could not predict when an epidemic might strike, but when statesmen acted decisively, they could lessen its impact. In every epidemic, the people looked to the Senate for leadership and guidance. They expected that their leaders would neither give in to popular pressure nor ignore the gravity of the situation.

If the Senate didn’t seek out seers, perform rituals, consult physicians, or take practical steps to ameliorate the outbreak and its effects, panic would ensue. Charlatans would take advantage of the people. Conspiracy theorists would accuse innocent citizens of poisoning or witchcraft. Lawlessness would break out in the streets of Rome. Famine and shortage would result. The republic would cease to function.

America is experiencing a modern version of these ancient struggles firsthand. We are used to a financial shock or recession every decade, but not one so deeply impacted by a disease. This is why Livy’s history is particularly relevant right now.

Livy’s introduction includes a medical analogy about the health of the republican body. Any state is bound together by a common set of beliefs, but republics require a particularly strong set of convictions that define its “civic life and communal morals.” This public life of the spirit is only healthy when citizens exhibit virtue.

So what are the viruses of vice that threaten to destroy republican life? In Rome’s early days, Livy identifies factionalism and selfishness as particularly virulent. Commenting on events in the 5th century, Livy describes troublemakers and fearmongers who use a crisis to stir up factions. He compares them to quack doctors who invent false sicknesses or take advantage of real ones for personal gain.

Livy argued that factional strife was more deadly than wars, famine, or plague. He was right. The republic survived many wars, famines, and plagues but was killed off by self-serving politicians—like Sulla, Julius Caesar, and Mark Antony—and the mobs that were attracted to such men.

Our own republic can learn from this example. COVID-19 has been deadly and tragic, but it will end. American life will return to normal, even if it is a somewhat different normal. But the factionalism that the pandemic has revealed will remain with us. Those more eager to attack their rivals (the focus of many Democratic congressional leaders), assert “total authority” (as explicitly stated by the President), or exercise their own petty tyranny (as seen by some governors) exhibit the true disease that might destroy our republic.

Livy also identifies greed, luxury, and self-indulgence, by which he means the pursuit of personal pleasures in place of civic responsibility and the duty to one’s neighbor. In a speech Livy gives to Cato, he condemns such things as “plagues that have ruined all the great empires.” Cato calls on private citizens and statesmen to embody the industry, austerity, and simplicity that made the republic a world power.

Commenting on an event 10 years later in the 180s, Livy describes how foreign rituals, the Bacchanalia, had infiltrated Rome like a disease. Rome was typically tolerant of new religions, but these festivals were practiced by a secret society that corrupted Rome’s youth. Participants engaged in sexually violent and sometimes deadly ceremonies. They spread immodesty and debauchery and disturbed public order. Because of their secretive nature, scholars still argue today over the details. In Livy’s mind, however, not only did they threaten their participants and young initiates, but the Bacchanalia also weakened the citizenry at large by luring citizens away from their civic duty.

Livy’s critique of wanton hedonism, an undisciplined youth, and sexual violence strike a chord today. We are still reeling from ongoing revelations of sexual depredations by notable figures, but self-indulgence has manifested itself in other ways during the pandemic. Leaders have faced difficulty restraining some who insist on pursuing their own desires despite the risks to others. The most obvious example was the flood of spring breakers who flouted good counsel and journeyed to popular vacation destinations, exacerbating the spread of the disease in the mere pursuit of pleasure.

Livy was right to insist that young citizens are vulnerable to the pestilence of civic selfishness. It is harmful to teach them an ethic of self-discovery and personal gain. New generations must be habituated to serve higher causes and make sacrifices for the broader community.

This habituation is important because choosing to be selfless is often difficult. Rome’s most revered commander, Scipio Africanus, had to deal with an outbreak of selfishness that took the form of mutinous troops. In 206, these citizen-soldiers had understandable grievances. Far from their farms, they had spent years fighting a fierce and fluid enemy in Spain during Rome’s desperate war with Carthage.

When Scipio himself fell mortally ill, some of them took advantage and led a rebellion. Scipio recovered, however. After arresting the ringleaders, he gathered the troops and reminded them of Rome’s long history, which always featured citizens willing to suffer any misfortune and brave any danger for each other and their republic. He asked them to return to this sense of sacrifice and solidarity. The average citizen’s republican duty is what saved Rome even when generals like himself had died in the war: “The Roman people live on, and will live on, though a thousand more generals should perish through sickness or the sword.”

Scipio’s warning remains with us today. Our republic is under great strain and political liberties will have to be set aside temporarily, but this means that citizens must demonstrate the resilience to sacrifice for each other and then regain our liberties when the crisis has ended.

Pandemics do not change a culture as much as they test it, revealing its strengths and weaknesses. We must do what is right to preserve life during the pandemic, but we must also heal the political vices that afflict our republic. Only then will our body politic be strong and ready for the next crisis that comes.

The Old Normal is Alive and Well in Paris