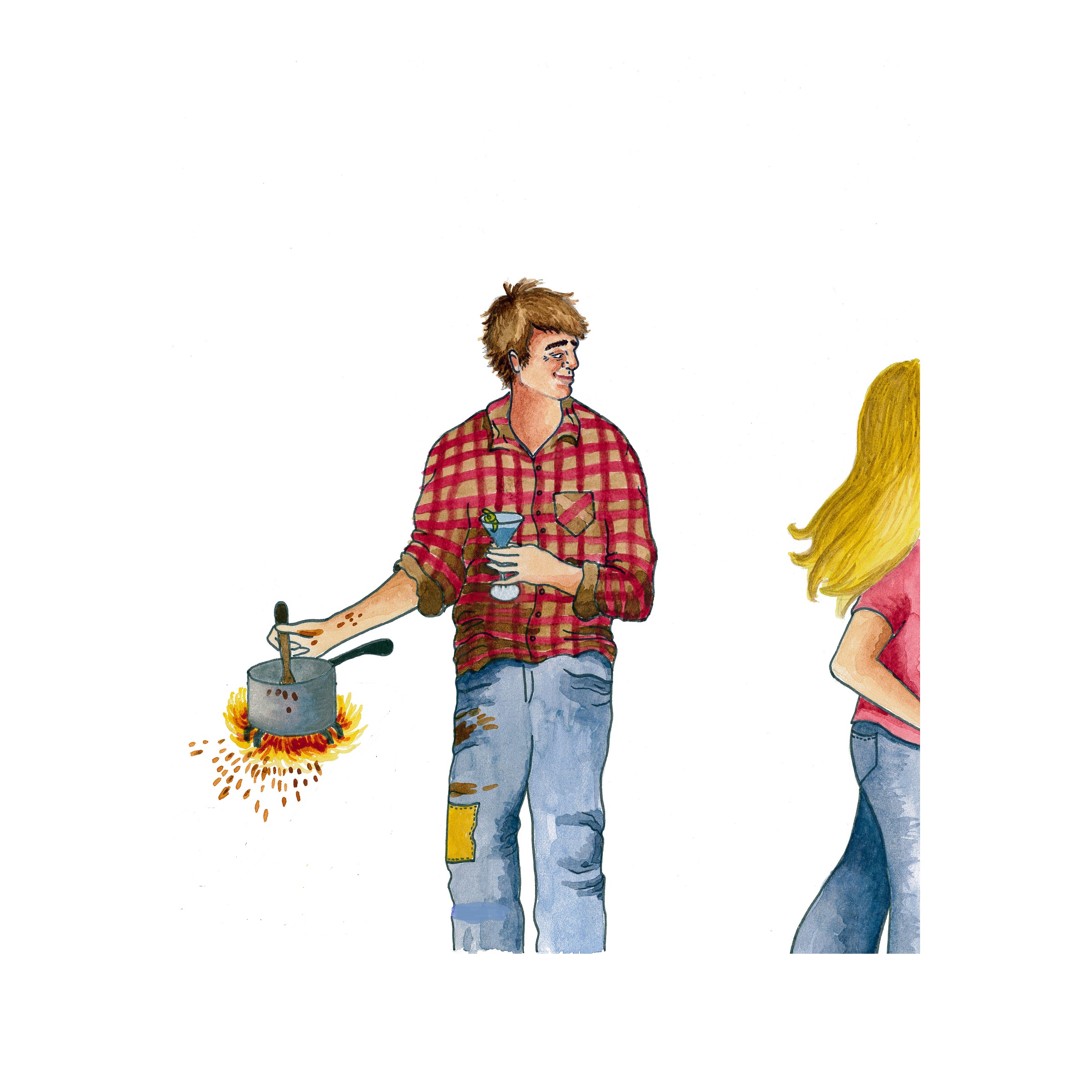 We remind our readers that both the Bar Jester and the Culinary Plagiarist are inventions of Jason Peters; our interlocutors here are therefore at once the same person and yet two distinct persons, infernally begotten of a third.  Indeed, a helpful hypostatic analogy might be drawn from the Chalcedonian formulation:  both BJ and CP are fully JP and fully Not-JP.

If that’s not helpful, think of Milton’s perversion of the Trinity—Satan, Sin, and Death—in Paradise Lost. —ed.

Bar Jester:  This should be interesting.

Culinary Plagiarist:  Should be?

Bar Jester:  Can I get you anything?

Culinary Plagiarist:  Bourbon, neat.  Double.  The most expensive one you’ve got.

Bar Jester:  Are the gears turning?  Okay.  Let’s get started.  What prompts a sports nut, amateur mechanic, and bumbling hobby farmer to write a book on food—and what gives him the stones to call himself a “gourmand”?

Culinary Plagiarist:  Damned if I know.  But like almost everything else in the book, “gourmand” is meant ironically.  Some writers need almost no provocation to write a book.  Remember Edward Abbey:  “I write to amuse my friends and annoy our enemies.”

Culinary Plagiarist:  A student once blurted out in class, “don’t you ever answer a question in your own words?”  I don’t recall the occasion that prompted it.  Let’s say she asked me if I write poetry.  My evasion probably went something like this:  “Well, as J.V. Cunningham once put it,

How time reverses
The proud in heart!
I now make verses
Who aimed at art.”

This lass—more than 25 years later I remember her face and name—put on a look of real exasperation.  “Don’t you ever answer a question in your own words?”

I realized that day how frequently I hide behind what others have said.  Unless you’re an exhibitionist—and don’t bring up the “unfortunate incident” involving the ATF, which the papers blew way out of proportion—there’s no need to expose yourself when you can expose others.

Bar Jester:  And so plagiarism is the conceit here?

Culinary Plagiarist:  It’s an organizing principle of sorts.  Mostly it’s a running gag in a book of many gags.

Culinary Plagiarist:  I’m an odd stringy guy.  Desire, you know, is a very great engine, greater than the dynamo.  Thieving I’ve touched on.  God-fearing—well, “meta phobou,” as the priest says.  “In the fear of God, with faith and love, draw near.”  Without Mr. Big hovering above, and without the “distinguished precipice” Dickinson wrote of—the one we’re supposed to avoid—there isn’t enough meaning in the world to satisfy a gnat.  With them, it’s all meaning all the time.  Atheists will disagree, but they can go to hell.

Bar Jester:  You spend a fair amount of ink in this book on your poor wife, whom you call by various pet names, such as the censorious “Counter of Cocktails.”  Is she okay with this?

Culinary Plagiarist:  I guess we’ll find out.  As I think you know, she’s a good sport, and our children were good sport in the making, as Gloucester said of Edmund.  But the truth is, she’s the center of my irregular orbit.  And it is very difficult to separate the desire for food from the desire for a woman.  Learning itself awakens Eros, you know.  Trust me:  I sometimes take a break from smart-assery to teach literature.  I see this all the time, and I don’t mean it in a creepy sort of way.

Bar Jester:  Do you have a favorite dish in the book?

Culinary Plagiarist:  I’m not partial to the chapter on the martini, but I’m fond of it.  I’m also fond of the martini itself. It is very civilized.  “An Expostulation Upon the Morning B.M.” should please a few readers.  But I should be clear about this:  “B.M.” is not what you think; it stands for “bloody mary.”  And I’m almost certain to make several new friends, especially among la feminista, because of “Men, Women, and the Dishwasher:  A Non-Sexist Dissertation on Female Guile and Incompetence.”

Bar Jester:  Let’s talk for a minute about drinking.  Anyone reading this book will assume your liver is the size of the wide Sargasso sea.

Culinary Plagiarist:  It is true I enjoy a drop.  A wee dram.  We both do, you and I.  It is also true that my espoused saint is a veritable and self-appointed counter of cocktails.  She has her reasons—all the pathetic drunks who show up on her unit in the hospital, for example.  But the thing to bear in mind here is persona.  I don’t have to tell you that one of the benefits of reading John Donne’s poetry is that it teaches you what a useful thing a persona can be.  The Dean of St. Paul’s saying “I can love both fair and brown”? or “Let me, and do you, twenty know”?  That’s special. People will misunderstand, but that’s their problem.

Bar Jester:  Something tells me there are people who won’t like this book at all.  For example, this sentence actually appears in it:  “Like Bruce Jenner, breakfast ain’t what it used to be.”  How do you expect the woke crowd to tolerate this kind of bigotry?

Culinary Plagiarist:  Every woke person I know is sound asleep.  They won’t notice.  Besides, such somnambulants are too busy being intolerable to read great literature.  As for liking the book, that’s not the point.  The point isn’t even to read it. The point is to buy it.

Bar Jester:  What about sociologists?  You’re pretty hard on them—in a book about food, for God’s sake.

Culinary Plagiarist:  They deserve it, and that includes the ones I haven’t met yet.  They’d deserve it if this were a book about the tax codes of Australopithicus or birds that propagate on the wing.  English professors have been the punchline of academic jokes since forever.  It’s true that most of them deserve it, but that’s irrelevant.  It’s time to spread the love around.

Culinary Plagiarist:  Now you’re asking me to be sincere.  I address the problem of too much sincerity in the introduction.  But okay.  I’ll take Supper of the Lamb.

Culinary Plagiarist:  Because you asked.

Bar Jester:  How do you think this book will do?

Culinary Plagiarist:  If this little gem doesn’t outsell Fifty Shades of Dull or Why Liberalism Failed, the end is near.

Bar Jester:  I have to ask this, because it’s de rigueur.  The damned form requires it.  But try to hear the irony.  What projects are you working on now, now that this book is out?

Culinary Plagiarist:  Just for that I should answer like an amateur pianist:  “I’m between pieces at the moment.”  Translation:  I haven’t touched a piano in months.  But in fact I’ve collected, sawn up, and split a lot of hickory in preparation for digging a barbecue pit.  I aim to convert hogs into men.

Bar Jester:  I recognize that theft.

Bar Jester:  Did you suffer any lapses in writing this book—like, for example, in a moment of rare sobriety did you slip into seriousness at all and then fail to cut it in the editing stages?

Culinary Plagiarist:  Regrettably, yes.  I mention a few things about the necessity of f-f-f-f-f-f-

Culinary Plagiarist: Fasting. Thanks. That’s a tough one to say. Hey! Nice theft there!

Culinary Plagiarist: Of course I know. How’d you know?

Culinary Plagiarist: It’s hard to keep us all straight. Anyway, the Afterword is an attempt at semi-sound theology and literary criticism—not to be confused with literary theory, a pestilence that has wreaked as much havoc on this poor beleaguered world of ours as light beer, associate deans, the Ivy League, Amazon, the iPhone, the designated hitter, skirts that conceal kneecaps, and the New York Times, all because these over-earnest theorists, desperate to publish, have sphincters tighter than an over-torqued lug nut.  I also say a few words in defense of topsoil, without which, as you know, we’re fornicated.

Bar Jester:  But not soccer.  I hope you don’t defend soccer.

Culinary Plagiarist:  What do you take me for?  A European in skinny jeans and hair gel?

Bar Jester:  Read that bit on soccer for us.

Culinary Plagiarist:  [clears his throat and puts on reading glasses; turns to page 7] “I’m an unreconstructed sports nut who favors the standard American pastimes.  But I abominate soccer and must ask you to forgive me for believing that the mascot of all soccer teams should be the penguin.  If you’re going to behave as if God didn’t provide you with hands and arms—and bore the hell out of everyone on your way to a 1-1 tie—then what you are is a penguin.”

Bar Jester:  That’s pure gold!  But what’s it got to do with food?

Culinary Plagiarist:  What’s that got to do with anything?

Bar Jester:  The title of the book maybe?  It seemed an honest question.

Culinary Plagiarist:  Can I ask you something?

Culinary Plagiarist:  What did you think of the book?

Bar Jester:  Oh, it’s best thing I’ve read since Dispatches from the Muckdog Gazette, hands down.  It’s almost as if I wrote it.

Culinary Plagiarist:  Say, which one of us gets to bed down with the Counter of Cocktails tonight?

Culinary Plagiarist:  That bastard. [raises empty tumbler]  What is there, a bourbon shortage or something?

Bar Jester: What am I, the ecstatic patron of recurrent booze?

Bar Jester: Down the hall to the left.

Bar Jester: You were expecting the SI swimsuit issue?

Culinary Plagiarist: I was expecting Cottonelle. Hey! The first 23 pages are missing!

The Man Who Saw the Bear