Boise, ID. Sometimes it’s the right book at the wrong time and sometimes it’s the wrong book at the right time. I am still not sure which The Inner Life of Animals has been. Having recently reviewed The Hidden Life of Trees, I was well-prepared for Peter Wohlleben’s anecdotal, speculative, and sympathetic writing on the emotional weather of various animal species. I was not well-prepared for the death of my family’s beloved dog Rudy during the same week. 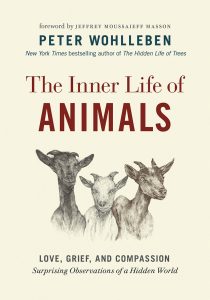 Wohlleben’s great strength as an author is his warm engagement with the natural world. He has a wealth of experience observing and working in forests and that pours out in an abundance of telling detail and appreciative description. This rich narrative flow was welcome as I worked through losing my Rudy this past week; it offered a larger context for contemplating my dog’s sufferings, the financial limits we had to develop in our spending on him, and the flowing grief of finally losing him.

Owning a pet should be a matter for reflection in our wealthy and privileged society. I have spent some time considering the moral implications of my own personal pet-investment—both financial and emotional—in this world of need and loss. My dog has been of service in my philosophical development and in the emotional development of my little family. I have written and spoken on the ways that Rudy taught me about how love grows in and through service as his puppy-self required more of me than I wanted to give. He was the first animal my sons knew and care of him taught them much about responsibility and self-sacrifice. His death has taught them the shape of grief: its tears and terror as well its affection and humor.

Rudy is not the first pet I have loved and lost, but grieving his unexpected death this week has been surprisingly difficult and complex. Why is this loss so hard for my ordinarily strong husband to bear? How are my children’s expressions of grief and desire to be understood and guided? How does the tension in multiple griefs resolve without competition or conflict? How can we mourn so dramatically a mere animal as the world burns with cruelty and injustice inflicted on men and women? 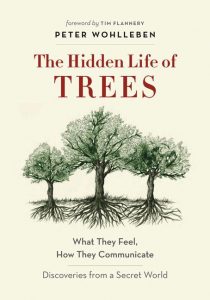 The Inner Life of Animals is not actually as helpful as I had hoped. Neither is it particularly painful for even my raw heart. While it provided a larger canvas for these experiences and offered questions to consider, it ultimately falls short in philosophical reflection. Wohlleben’s work ranges over his experiences with both domesticated and wild animals. Clearly, his work as a forest manager has brought him into contact with a plethora of large and small mammals, birds, and insects. He relates stories about woodland mice, roe deer, wild boar, hedgehogs, jays, ravens, bees, and ants as well as about his horses, goats, and the family dog. The great strength of The Inner Life of Animals, like The Hidden Life of Trees, is the intimate detail Wohlleben’s unique career has given him. Life in a forest lodge sounds peaceful, thoughtful, and enriching.

The thrust of this work is probably intended to be against hunting and against factory farming and toward a peaceful coexistence with animals. It may even be intended to encourage a conservative sort of lacto-ovo vegetarianism that respects the natural life and fertility cycle of species that produce eggs and milk. Much space is given to detailing the probable distress of hunted animals and too-closely penned animals. Incidentally, the hunts he described on German “wild lands” sound claustrophobic to my Mountain West imagination! I can imagine that a hunted deer without the range to flee would be rather more anxious than one with Idaho to roam. More than half of my state is designated wilderness area—a total space that equals more than a third of the land area of Wohlleben’s Germany—and it sits nestled alongside states whose own wilderness areas are nearly as extensive. It seems that Idaho deer are probably a bit less stressed out given their generous territory.

These little tales are enjoyable to read. Bees are always intriguing to read about for their intelligence and industriousness. Hedgehogs are puzzling but adorable. Squirrels are much more complex than I have ever given them credit for (I tend to despise them as tree rats that eat my plants!). But whenever Wohlleben ventures away from questions and stories and into answers and theories he reveals his ignorance of the consequences of ideas. In a short passage on beneficial versus harmful animals he dismisses all such classifications as intellectually bankrupt manifestations of dependence on the idea of a Creator. Man is dethroned and not allowed to make any judgments about animal behavior, as all creatures are equalized. This is a surprising reversal of his argument that we should value the inner lives of animals for their similarity to our own.

The internal confusion of his arguments, and the nihilistic tendencies thereof, is, unsurprisingly, most evident in the chapter on “Good and Evil.” “Species appropriate” becomes the sole standard by which behavior is deemed acceptable or not. What grounds Wohlleben then has for judging factory farming or hunting as evil is not even addressed.

Thus, I find myself much more reluctant to accept anthropomorphizing language and practices around animals than I was to accept it for trees. Because of their greater nearness by approach and nearness by similarity to humans, the cost of misunderstanding that similarity is high. Wohlleben is wrong to imply that animals should be cared for and treated well because their emotional lives may be as rich as humans. Similarity to humans does not confer value in this way. Each being in its own complex reality is valuable for its existence in the order of the universe. It is fundamentally nihilistic to believe that we have to see animals as nearly persons before we deem them worthy of care, for we then inadvertently devalue beings in so far as they deviate from the norm we have falsely imposed. To recognize any other as a “thou” is to honor it for being itself—to honor it for not being I. To recognize others only as they approach the I is to deny the absolute value of anything other than I. Wohlleben believes he is opening up the world to greater sensitivity toward and care of animals but instead he narrows it. In his philosophy one can only really care about the other so long as he maintains identification with the other. This is inherently fragile as differences intrude even in human relationships, and those differences lie under the justifications of all kinds of exploitation. 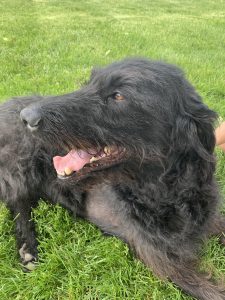 The real concern for animals’ inner lives that we should be cultivating presents a challenge to our usual method of dealing with the input of a big and busy world. We prioritize beings in an ad-hoc hierarchy and, rather than reflecting on how we should be ordering our affections, ignore anything that does not rise to the highest level of importance. Debates about policy issues clearly illustrate this. If I care about one cause, too often I am assumed to be indifferent to all others. Feeling personally insecure about my extravagant grief over my dog’s noble death—he fought the anesthesia to the end because of his strong protective impulses—I fear that I am forgetting other, much more important griefs swirling around me. But all rightly ordered love deserves to be honored and all death grieved. Sensitivity to and care for the inner life of animals, both domestic and wild, is not necessarily the luxury of a privileged life. It may be a luxury if it is mere sentimentality that will not face the desperate craving for justice and peace throughout the world. But, if it is either the wellspring from which justice rolls down or the overflow of the same—either the root or the branch of such justice—it is righteous.

If I can value the inner lives and the outer well-being of animals and plants and rocks and stars, because I can see the inherent beauty and goodness that something simply is, then I can be trusted with believing myself of higher status than animals. I do not have to make myself the standard of experience but can value their experience apart from any similarity or difference to mine. If I cannot see that goodness, then I can neither be trusted to stand above nor alongside animals. I will abuse or ignore or desecrate because I cannot know myself without knowing that it is good that a hedgehog exists. If I can recognize such goodness, then I can honor it. If I can honor it, I can be ennobled as I am conscious of the condescension toward and ennoblement of the animal or the plant.

All photographs courtesy of Amanda Patchin.

From Dogs to Fur Babies–and Back Again

Consider the Forest: A Review of Peter Wohlleben’s The Hidden Life...