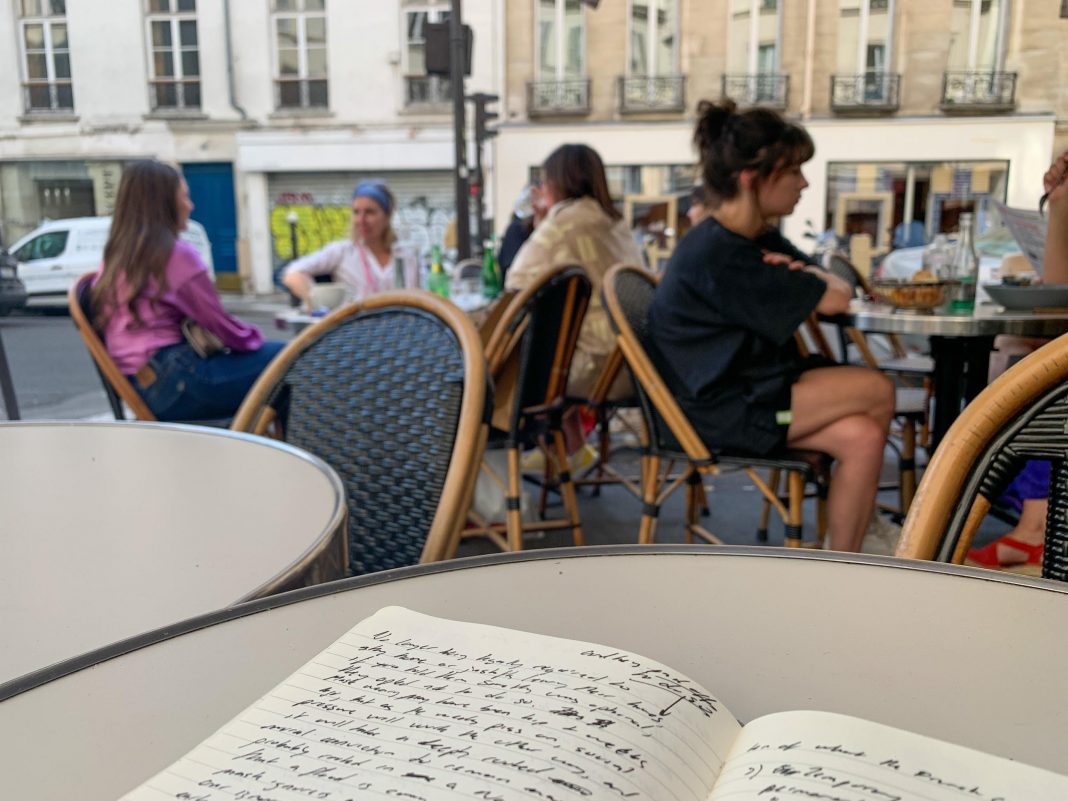 Paris, France. I’ve spent my entire life in countries with unrestricted freedom of movement. Not only did those countries let me go where I wanted, whenever I wanted, as long as I wasn’t breaking laws, the countries were indifferent to my location on a given day at a given time. Insofar as my movement encouraged commerce and the support of local businesses, which in turn paid taxes, these governments might actually encourage me to get out and about.

I think it was because I’ve always taken freedom of movement for granted that I felt that energetic frisson in my bones and brain this last weekend, as our local parks opened and restaurants prepared to open their outdoor terraces here in Paris. While there had been an energy and buzz in the air since the first days of deconfinement, this last weekend was different. Normal service wasn’t quite restored, but it felt quite normal. The streets and parks were packed (Buttes Chaumont, a very large park near my home, was as busy as I’ve ever seen it, and that was with its restaurants and bars closed). The majority of the population across 6 arrondissements that I visited one day (specifically the 19th, 11th, 5th, 4th, 3rd, and 2nd) were unmasked and not social distancing. Witnessing this has been like watching a light turn on in a dark room: one moment there was coronavirus, the next moment it was summer.

It’s important to note that it is only in and around Paris, and only for the next few weeks that we will continue to see these restrictions: they include schools reopening with capped class sizes so some students will continue to attend remotely; swimming pools, campsites, and theaters closed; gatherings in public places limited to groups of ten (enforced by roving police). The rest of France, host to fewer cases and a lower infection rate, are “back to normal.”

The much-mooted “second wave” which the media seemed to almost hope for so they could continue to be one of the few “essential” workers hasn’t materialized, and the president of the Scientific Council advising the French government has said that even in a worst-case scenario a second lockdown would be unacceptable for a number of reasons. Given that sunshine and fresh air are extremely effective (and free) deterrents against viruses of all kinds, not just the recent celebrity COVID-19, one wonders why we didn’t deconfine sooner. We were, in part, witness to the worst tendency of science throughout the ages: stubborn adherence to old beliefs and measures taken when we had very little data and information, combined with a refusal to modify hypotheses when in receipt of new information. This tendency continues on into the private lives of some of my friends and acquaintances who have been scared into a private “extended edition” confinement. I try to respect the turbulent emotions some of them have felt in the past months, so I avoid asking them: “If masks work, why do we social distance? If social distancing works, why do we wear masks? If both work, why did we lock down?”

Some of the fearful ones do venture out, with all the protection you can imagine: gloves, masks, gel, sometimes even a visor as well. Some of the younger set, determined to be as fashionable as they are “safe,” have bought designer cotton masks–not necessarily helpful against viruses, but they certainly go well with their summer outfits. This is an unsurprising historical (and humorous) echo for anyone who has visited the Museum of the Liberation of Paris, which has stills of models sporting gas masks as accessories for that season’s release of new fashions.

I’ve even been witness to a few exchanges in which the French have lectured each other, imitating the health and safety briefings of the weeks gone by. On the first day of deconfinement I was on a bus, masked. A young man entered the bus without one. About half a minute later, two middle-aged adults gave muffled speech to complement their camouflaged disapproving looks. “You need to wear a mask, sir,” she gently chided in French. Her interlocutor, probably in his late 20s, gave her the typical gallic shrug. “It’s not just for my protection, but yours too…” she droned on, and he listened politely, but in the vein of, “I’ve heard all the same stuff you have, lady, and I’ve decided to act otherwise.”

That’s the reality of a free country: you are continuously surrounded by others who differ from you in many ways. In those first few days there was a tension of the “good” mask-wearers who wore them even though they weren’t required outside of public transportation or in certain stores in contrast to the “bad” mask-ignorers who only wore them when required to. But as day passed on to day, and masks were optional in more and more shops and businesses, the French resumed their normal cultural attitudes, formed over centuries of living in this country.

No longer being legally required to stay home or forced to justify leaving them, the French interpret “optional” as “don’t bother.” Mask wearing may have been hip two weeks ago, but as summer continues to come on, social pressure will work the other way, and it will take a deeply rooted moral conviction to remain masked, probably rooted in a Noah complex, that a flood is coming and we mask-ignorers are to be pitied for our ignorance. I stopped predicting early on in this crisis, but I am willing to predict that we will have a summer this year, as long as we don’t conspire to ruin it for ourselves.

We’ll be harvesting lessons from the bad dream that was most of the last ten weeks for years, but it’s not too soon to draw a few now:

In the meantime, many of us are glad, after months of confinement, to get back to an important notion that should be taken for granted in a free society: the ability to make our own informed choices about what we do and how we conduct our lives. No man is an island, and everything we do, even in the privacy of our homes, has an effect on our society as a whole, no matter how much those who deny the existence of the soul would tell us. The states that slavishly imitated China’s extreme lockdown procedures would have us believe that they are so very different from the communist Chinese, but the past three months have shown us that the same lie that animates the Chinese government has spread and infected the West as well: the State knows best. If those states were properly oriented toward the Permanent Things and eternity, perhaps we might believe them, but since they are manifestly not, we may not have to wait too long before they subject us to such a lockdown again…for our own good, of course.

Why I’m Fasting From Analogies