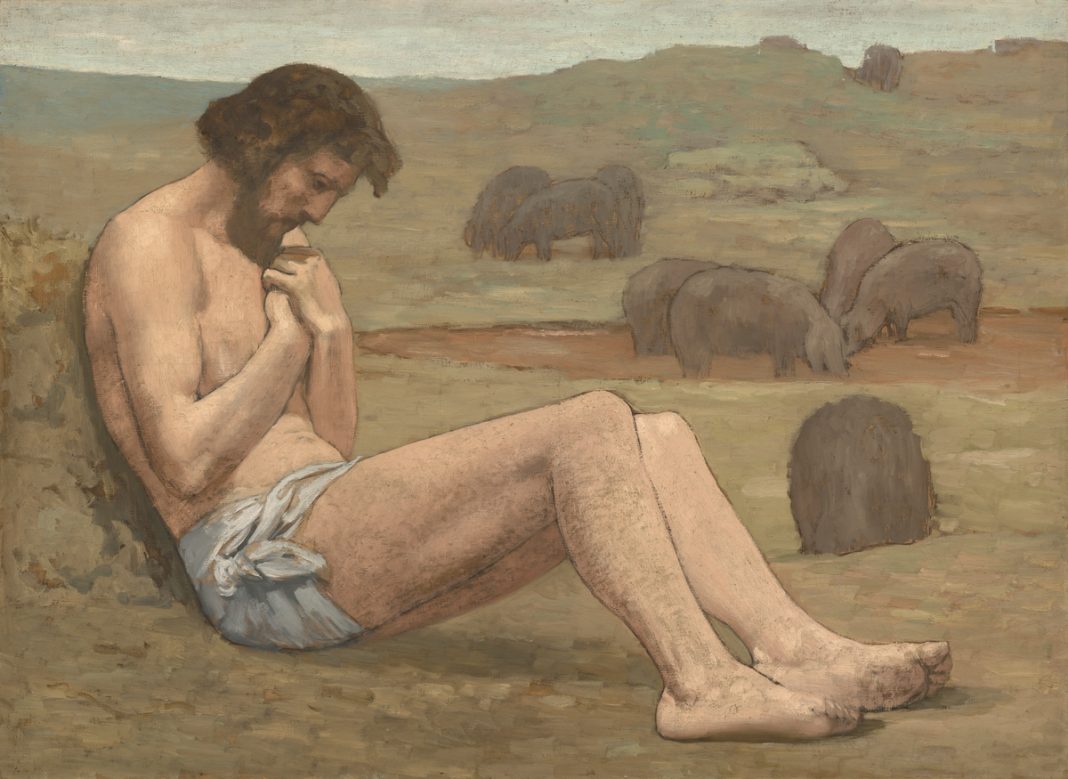 Boise, ID. The parable of the prodigal son pivots in a field of pigs, where a young Jewish man squarely faces what he has become. The King James Bible describes the moment with a memorable phrase: “when he came to himself.” The conclusion of Donald Trump’s first term offers a chance for all Americans, but especially Christians who have moved from being reluctant voters to fawning supporters, to reflect and do likewise.

One of the most famous depictions of the parable is Rembrandt’s The Return of the Prodigal Son, but I have long admired a work by a somewhat lesser known artist, Pierre Puvis de Chavannes. It often hung in the National Gallery of Art during my years working in the nation’s capital. In The Prodigal Son, Puvis de Chavannes depicts not the father’s forgiveness, as Rembrandt does, but the son’s repentance. Half of the canvas is dominated by a man stripped of all but a loincloth. His hands clasp his heart. His head is bowed in remorse. His legs are slightly bent. This fetal position seems to echo both where he has come from and the near naked, helpless state to which he has returned. The rest of the canvas is a vague landscape with swine foraging in the background.

Here, there is no protest of being misunderstood. There is no blaming of others. There is only an unclean man who is facing the stark reality of where his choices have led him. The long walk home is still to come, but in this moment the son is coming to himself. Most of us have experienced this—if not in a field of pigs then perhaps at the bottom of a bottle or in a hundred other ways. Facing reality can be jarring, but it is ultimately preferable to delusion.

Politics is not the most important aspect of reality, but it is important enough to be faced squarely. Trump has not grown into the Oval Office as some hoped. He has instead demeaned the presidency and has largely warped the GOP into a party of enablers rather than principles. From Comey to Stormy, Helsinki to Ukraine, Roy Moore to the Mueller Report, Charlottesville to St. John’s Church, prayer breakfasts to midnight tweets, caged children to coronavirus (plus Sharpies and Syria and the shutdown), President Trump has given us plenty of reason to hang our heads. Particularly for Trump voters, coming to ourselves means seeing the dirt we are caked in as dirty. Multitudes have chosen to wallow in the mud instead.

Jesus could have simplified his parable, making it just a symmetrical story of rebellion, repentance, return, and forgiveness between a father and son. Instead, Jesus gave us a tale with two brothers. Among other things, the story reminds us that no matter how perfect our heavenly Father, we still must share this earthly house with very flawed people.

One must be careful of stretching the analogy too far as Jesus certainly did not have the politics of 2020 in mind when he drew up his character list. Additionally, there is plenty of older brother style resentment to go around. Conservatives who did not vote for Trump can resent those who did and vice versa. Democrats might resent anyone voted for Trump or did not vote for Clinton. Looking forward, though, Christian voters who have come to themselves and see Trump as problematic must deal with the reality that the Democrats are again only providing a troubling alternative.

Joe Biden once declared himself “about as liberal as your grandmother” on abortion, but today Biden wants taxpayers to pay for them by the thousands. To invoke a beer analogy, Biden is also proving to be a “light” version of Bill Clinton. There is no blue dress, but Tara Reade tells a compelling tale and the internet holds more than enough cringe-worthy tape to make it seem plausible. Clinton lost his law license after his impeachment; Joe was almost kicked out of law school for plagiarism (a bad habit that would recur). There is no Clinton Foundation, but there are plenty of Bidens who have profited in questionable ways from the family name. While Bill and Joe may be fine casual company at a bar, the idea that we would look for our leaders at Moe’s Tavern always struck me as odd.

There will, however, be other options on the presidential ballot beyond Trump and Biden. The American Solidarity Party has a platform that tracks with many concerns shared at FPR—even promoting distributism by name. Here, though, we are in the realm of a long-term renewal project (while that too may positively track with many Porchers, as suggested by the ASP presidential candidate’s interview here last fall). In the short-term, however, unless an independently wealthy and already recognizable face emerges soon as an option, then someone with either an “R” or “D” next to his name will almost certainly be the next president.

Congressman Justin Amash’s brief exploration of a Libertarian Party run was likely the last slim chance for someone else to occupy the White House. After making only a minimal media splash, Amash apparently concluded that the odds were too long to be worth the effort. The last remaining ranks of a 2016 “Never Trump” movement that would have welcomed an option of Amash’s stature four years ago, have in 2020 largely decided that a non-socialist Biden is good enough for government work. They hope to defeat Trump and then rebuild neo-conservative Republicanism from the ashes.

Coming to ourselves, however, is about more than deciding whether to sport a new political jersey during our quadrennial political games. Instead, it may well mean realizing that there is no one for whom to root. That can be a bit demoralizing for those of us who have devoted an outsized share of our energies to matters of politics and public policy. Nevertheless, the prodigal son had limited hopes when he said goodbye to the pigs, but he had come to himself and he was heading home regardless.

“Seek first the kingdom of heaven,” instructed Jesus. That need not be read to require the exclusion of all earthly matters from our minds. Indeed, it should not be read as such under a fair interpretation of scripture as a whole, but the point of proper priorities is undeniable. Today, our duty as Christians in the public square is to pray for President Trump and all who seek to replace him; to look at them with discerning eyes; point out their strengths and faults when we see them; make our best judgment in the voting booth, but always strive to bring the true light of Christ to our politics and to our lives beyond politics. In an age of increasing partisan tribalism, the true tribe of the Christian is the church and her chief is Christ, not any politician.

A Presidential Proposal Worthy of the Porch