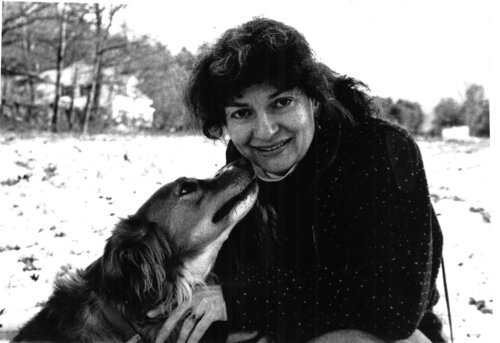 Leeds, MA. Sometime shortly before his death in 2018, Donald Hall put together a volume of selected poems by his late wife, Jane Kenyon, who died in 1995, which was just published this year. In a final act of deference, Hall is not listed as editor, and his name is nowhere to be found on the cover. It is simply titled The Best Poems of Jane Kenyon. Early in their marriage, they did not appear together at readings because audiences did not regard her as a poet in her own right. She was once introduced as “Joan Kenyon.” Unusually for a selected volume, the poems are not divided by which book in which they originally appeared; they are merely presented in chronological order from her earliest poems (from 1978’s From Room to Room) to her posthumous work (1997’s Otherwise). There is no introduction. There is no afterword. Her poems need no introduction because, as Wendell Berry observes, her poetry “doesn’t demand great intellect or learning, or even sympathy; it demands quiet.” This volume presents her life’s work in all its stark clarity. It makes room for the silence the poems require.

In 1975 Kenyon moved from her native Michigan to Hall’s family homestead, Eagle Pond, in New Hampshire. Much of her early poetry shows her grappling to find her place in her husband’s home, which he had been writing about since the 1940s. She writes in the opening poem “From Room to Room”: “My people are not here my mother / and father, my brother.” Instead Eagle Pond is haunted by figures of Hall’s past—his grandparents Kate and Wesley Wells, his mother and his aunts, the Ox-Cart Man. But in living life at the farm, Kenyon is able to share a kind of communion with other women who have lived and worked there before her. In “The Thimble,” a brief poem about finding an old thimble in the woodshed, she is reminded of

the tin ceiling at church…
repeating itself over our heads
while we speak in unison
words the wearer must have spoken.

While scrubbing floorboards in the next poem, “Finding a Long Gray Hair,” she finds herself

repeating
the motions of other women
who have lived in this house.
And when I find a long gray hair
floating in the pail,
I feel my life added to theirs.

Notice her repeated use of the word “repeating.” It is through the rhythms of everyday life—through work and prayer—that she is able to have communion with the past and so place herself in the present.

Kenyon, for all her ordinariness, is also a kind of visionary and a poet of fine religious sensibility. In his essay, “Why We Live Here,” Hall describes their going to the local church for the first time. They felt they had a duty to the ghosts of Eagle Pond, but after a few Sundays they “got there early.” Eventually they became deacons. It seems Kenyon’s poetry was especially animated by her newfound faith. Throughout this volume, and especially toward the end, her poems are filled with unselfconscious references to scripture—sometimes oblique, sometimes explicit, always insightful. Consider “The Bat”: “I was reading about rationalism, / the kind of thing we do up north / in early winter”—quite a way to begin a poem!—she continues,

Maybe the world is intelligible
to the rational mind;
and maybe we light the lamps at dusk
for nothing…

But her brief foray into rationalism is cut short in the next stanza, which is an isolated line: “Then I heard wings overhead.” Try as she and the cats might to catch the bat, “at every turn it evaded us // like the identity of the third person / of the Trinity.” As the bat evades the empirical senses, so God is only intelligible through his self-revelation (I suspect Kenyon was fond of Karl Barth). We should not puzzle too much about the bat, an admittedly odd image for the Holy Spirit. Eagle Pond didn’t have many doves so she used whatever came to hand as in a Brueghel painting. And this is why she can say in “Dutch Interiors”: “Now tell me that the Holy Ghost / does not reside in the play of light / on cutlery!”

She is also movingly candid about her struggles with faith. In one poem, “Woman, Why Are You Weeping” she is at church waiting for communion but “the old comfort does not rise in me, only apathy and bafflement” and later, making the comparison to Mary Magdalen more explicit:

The thing is done, as surely
as if my luggage had been stolen from the train.
Men and women with faces as calm as lakes at dusk
have taken away my Lord, and I don’t know
where to find him.
What is Brahman? I don’t know Brahman.
I don’t know Saccidandana, the bliss
of the absolute and unknowable.
I only know that I have lost the Lord
in whose image I was made.

As the poem continues, she reveals the source of her doubt. She has just returned from a trip to India where she has witnessed great suffering. We see what she means by “Men and women with faces as calm as lakes at dusk / have taken away my Lord” in the next section:

A man sleeps on the pavement, on a raffia mat—
the only thing that has not been stolen from him.
This stranger who loves what cannot be understood
has put out my light with his calm face.

This man’s serenity in the midst of his suffering is unsettling, especially since she cannot accept her own suffering. Kenyon has just found out she has cancer and writes:

The fire cares nothing for my illness,
nor does Brahma, the creator, nor Shiva who sees
evil with his terrible third eye; Vishnu,
the protector, does not protect me.

Kenyon does not try to answer the problem of suffering, she merely sits with it, waiting for communion. But this poem is a prayer. It written from a place of faith-in-despair, not no faith. It is not even doubt, really. She understands Barth’s insight that the “hiddenness of God necessarily reminds us of our human limitations. We do not believe out of our personal reason and power. Anyone who really believes knows that.” Jane Kenyon really believed. Recall the hiddenness of God in “The Bat.”

In “Woman, Why Are You Weeping,” she can still recognize the Lord and she knows that faith is not, in Barth’s terms, “an opinion replaceable by another opinion.” In an earlier poem, about Hall’s cancer, she gives him the last word on doubt, again gracefully sitting with it, not trying to convince:

Once we talked about the life to come.
I took the Bible from the nightstand
and offered John 14: “I go to prepare
a place for you.” “Fine. Good,” he said.
“But what about Matthew? ‘You, therefore,
must be perfect.’” And he wept.

In both poems, Christ suffers along with the sufferers. Here, “And he wept” recalls the famously short verse in the Bible, John 11:35, “and Jesus wept.” In “Woman, Why Are You Weeping” Kenyon recalls the words from the cross, “my God, my God, why have you forsaken me.” Christ weeps with Hall, and he shares Kenyon’s forsakenness.

Throughout the seventy-four poems collected in this book Kenyon works, without exception, within the given mode of late 20th century American poetics. That is to say, in the plain-spoken, personal, free-verse lyric—a mode which seems to have run its course, if Poetry Magazine is any indication. Even if it feels dated, we can no more fault her for using it than we can fault Sidney for writing sonnets. The point is, she was a master of it. Even when her lines lack tension, which they often do, she is there with an image that couldn’t be otherwise, or with some truth told with astounding clarity. Consider this metaphor from “From the Back Steps”:

A bird begins to sing,
hesitates, like a carpenter
pausing to straighten a nail, then
begins again.

Or this kind of anti-metaphor in “The Pond at Dusk”:

But sometimes what looks like disaster
is disaster: the day comes at last,
and the men struggle with the casket
just clearing the pews.

Unlike other poets of her stature in the ‘80s and ‘90s, Kenyon never held an academic post. She was foremost a poet of place. Not of the State of New Hampshire, though she was its Poet Laureate, but of the much smaller and less abstract corner of it in and around Eagle Pond. Her poems are populated by neighbors, her husband, the dog and cats, and the flowers she grew in her garden. Every page of this books seems to say, “this place matters.” Though I try to avoid comparing her poems to Hall’s, it is sometimes inevitable and clarifying. Hall’s poems are useful because they narrate his coming home. Kenyon’s are perhaps more useful because they narrate her making a home. In this, Berry compares her to the biblical Ruth, saying she “understood her exile as resettlement.” Most poets are forgotten soon after their deaths. Sadly, Kenyon is not likely to be an exception. This book, though, acts as a stay for a poet who risks being forgotten too soon.

Remembering Our Names After the Fall