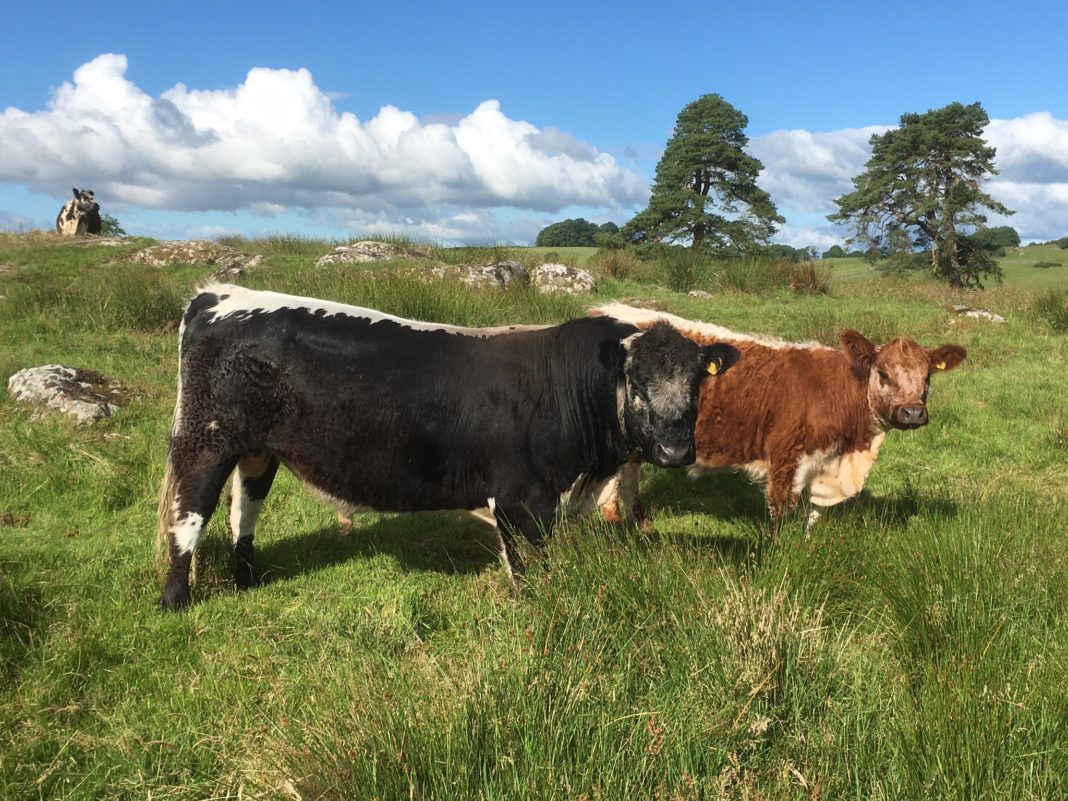 Reeds Spring, Missouri. It is winter, and a savage storm thrashes Patrick Laurie’s farm outside Dalbeattie, Galloway, in Scotland. Disturbed by nocturnal worry rising to knawing fear, Laurie grabs a flashlight and an overcoat and blunders out into his farmyard, irrationally confident that something is wrong. Possibilities run through his mind from the mundane—injured cattle—to the absurd: “every conceivable spunkie and ghoul” stalks his imagination. Yet his instinct is correct—he finds a blocked drain, water backing up to flood his hayshed. As he struggles to clear the drain in a “wet, hellish misery of ice and darkness and a relentless baffling wind,” Laurie reflects: “Where were the swallows now? And the deep summer stillness—warm stones, cut grass and daylight? This was no home to me, no place I knew.”

Though the drain clears, disaster is averted, and the morning dawns in peace, the night of panic chastens Laurie. He returned to Galloway and to his work as a farmer and conservationist relatively soon after college, and he describes himself unapologetically with the title of his new book: he is a Galloway Native, no less than his heritage Riggit Galloway cattle. Yet his struggle with fear and drainwater in the night checks him: “I’d been overfamiliar and presumed to know this place. I’d presumed to know this place. But even when the swallows came home months later and the yard was filled with their fun, that darkness stayed with me and held me at arm’s length again. It’ll take a lifetime to call this place my own.” Becoming native to a place, Laurie finds, challenges even those who have spent their whole lives there. In this poignant and lyrical memoir, Laurie memorably traces the griefs and joys of working to conserve—and to know—a changing landscape.

Not long after college in Glasgow, Laurie moved back to the family farm to work as a freelance writer, to raise the area’s traditional breed of cattle, and to try to provide habitat for vulnerable native seabirds like the curlew. Native reports on fifteen years of his efforts, intertwined with accounts of two other notable experiences: his attempts to conceive a child with his wife, and his friendship with a wry old hill farmer named Sanny. Each strand of the narrative contributes to building a portrait of Galloway as the “vanishing landscape” of the book’s subtitle, a rural place where people and ecology alike must adapt to the disruptions of industrialization and urbanization. Love, grief, rage, and longing equally characterize Laurie’s portrait of his home place.

Galloway as depicted by Laurie is a working landscape, not subject to much conservationist concern. Like many rural areas in the modern world, the region lacks jobs and accordingly welcomes industries that disrupt the land on a large scale, notably commercial forestry and wind farms. At times, Laurie feels he is “the only constant in a world of shifts and relays,” clinging stubbornly with an “unnatural loyalty” to a place that he never experienced in its whole and healthy state, and that few others desire to conserve. Though he lives among lifelong Gallovidians, Laurie’s concern for conservation and interest in the old ways of the region marks him out. Most folks are just worried about finding a job and paying their bills.

Laurie grieves for Galloway as it was and struggles against its industrial transformation. He never experienced the place at its native best, which took place before even his grandparents’ time; moreover, he has few illusions that his conservationist project will win out against the lumber and energy industries. For all the affection he has for Galloway as he has known it, he remains painfully aware that it is a diminished and abused landscape: “I still grieve for Galloway, but I can almost bear that weight now. I’m more canny in the way I use this place, and I’ve learned to glean goodness wherever I can find it. I pack my belly with things that nobody else will want, and I turn them into gold. Even when the last hills are gobbled and paved, I can carry forward some distillation of an old truth.”

The “old truth” Laurie carries comes in part from his sensitivity to the native animals and plants of the region, and in part from his relationship with the profane, knowledgeable Sanny. Laurie and Sanny have differing approaches to many things—Sanny is ambivalent about Laurie’s conservationist methods—yet Laurie depends upon the older man’s mentorship. In a key passage, Laurie reflects on the ways technological change has altered how farmers interact with the land:

Sanny . . . and my grandfather were born to be tragic heroes. They were the last of a long line of powerful men which runs far back into the ancient forests. They were locked in a fight between progress and nature; it’s no wonder I made them into tigers and gods. Their struggle was grim and epic, and it was so clearly doomed to failure that winning caught them off guard. After centuries of creeping progress, we suddenly leapt up and grabbed the world by its throat. I feel weak and mousy in the wake of those men, but I’ve inherited more power than all of them combined. Nothing can ever be taken for granted again.

Laurie’s sense of responsibility to the land emerges, he shows himself aware, from his greater capacity to damage it. Thus Laurie wins through his grief about the damage done to Galloway into compassion for those who have come before, without forsaking his pursuit of a better way.

Nonetheless, as the book closes, little is resolved for Laurie: his conservation work has yet to yield curlew chicks, he is still learning to farm, and he and his wife have not welcomed a child. (Happily, recent blog posts suggest they have done so since the book was completed.) Galloway is still vanishing beneath him, its banks “being undercut by rushing currents, and the mud marches away into the sea.” Knowledge of place, love, and grief achieve an uneasy synthesis for this period of Laurie’s writing life. One can hope there is more to come as he continues to farm, to conserve wildlife, and to make a life in Galloway’s vanishing landscape.

Anyone who seeks to live with integrity in a place ought to seek to know it deeply, yet such knowledge carries with it the risk of disillusionment. It is hard, not in principle but in daily experience, to continue to find joy and beauty in a place one knows to be riven by abuse and injustice. My own knowledge of the land at times threatens to overwhelm my love of the places I know best: now that I know how farming supplanted the prairies in my home state of Nebraska, I sometimes struggle to see its beauty; now that I know that the Ozark forests around where I live are the unhealthy second-growth leavings of clear-cut logging operations, I find it hard to look at the young oaks without regret.

No doubt, for many Americans, it has become hard to love these United States as we have grown more aware of the injustices that haunt our history and present. Yet love of our places and compassion for their history is essential, even with all our awareness of their flaws. Only through such grief-stricken love can the care emerge that offers the prospect of a better place. In his struggle to call a changing Galloway his own, Patrick Laurie offers a model for all of us who seek to love our places well.