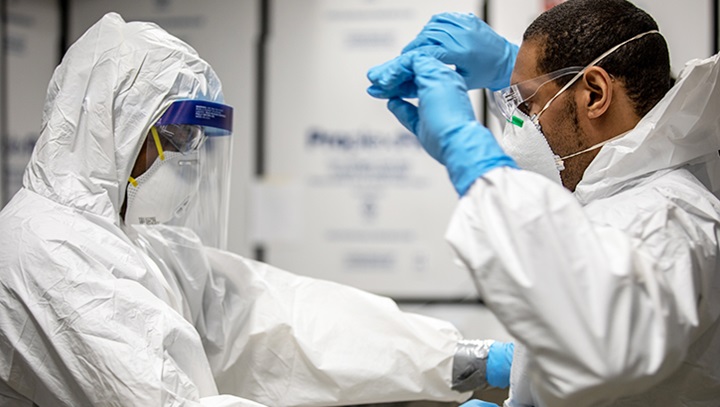 Atlanta, GA. In early August, President Trump made headlines after hosting a news conference at a New Jersey country club in contravention of a number of public health regulations, including the state’s social distancing guidelines and mask mandates. Trump responded to a reporter’s critique with a blithe, “They have exceptions…and it is also a peaceful protest.”

Of course, these comments were a not-so-subtle dig at the contradictory messages issued by many public health officials back in May and June. For weeks, experts condemned participation in mass protests, highlighting the health risks associated with large gatherings. Then, an open-letter signed by hundreds of members of the public health community began to circulate, advocating for an “anti-racist public health response” to the growing number of anti-police protests in the wake of the George Floyd killing. Essentially, they were now advocating for the acceptability of in-person protests.

Observers quickly noted the surprising change in tune, arguing that such statements by public health officials were clearly ideological, not scientific, in nature—gathering in large crowds either heightens the likelihood of COVID-19 transmissions, or it doesn’t.

To the surprise of, well, no-one, these two incidents were interpreted largely within the strict confines of political echo chambers, and commentators on both sides have resorted to circling the wagons and parroting partisan talking points. Sectarian bickering aside, the discourse—from both the right and the left—around “following the science” regarding COVID-19 exposes a deeper flaw in our politics and, more fundamentally, how we know what it is that we think we know.

If the US response to COVID-19 had an official mantra (which—given the irregular, varied nature of local, state, and federal responses—is hard to imagine), it would be this: “Follow the science.”

Trying to make decisions in an ever-changing, perpetually uncertain situation, leaders of all stripes have invoked the prestige of science in efforts to rally support for their bandied interventions. The NBA, the first of the major sports leagues to cancel games, based their decision on science. Higher education administrators are following the science—though often in different directions. Actual scientists are following the science, though, again, it seems to be taking them to different destinations. And politicians are most definitely—if you take their word for it—following the science.

For all the talk of science—what with its systematic, rigorous, unbiased approach to asking questions and proffering answers—things on the ground are about, umm, clear as mud. For the average Joe trying to make heads or tails of it, a pretty simple question emerges: how is it that everyone, from the President on down, is following the science, and yet winding up at dramatically different conclusions?

The COVID-19 crisis has laid bare our society’s problematic relationship with scientific knowledge. Rooted in the scientific method, the power of science emerged in the 17th century as a systematic, logical approach—via observation, experimentation, and replication—to the formulation and evaluation of hypotheses about how the world works.

Science, then, was useful inasmuch as it provided objective answers to empirical questions. The beauty of science, in other words, is its unabashed honesty—science can tell us, without bias, what is. (And while—as Hume’s Guillotine reminds us—the is of science may not directly translate into a moral ought, it at least provides us with an impartial, descriptive assessment of the empirical realities before us).

The candor of science is the source of its credibility. Its power rests in its reputation as an evenhanded arbiter, impervious to ideological persuasions, emotional pleas, or wishful thinking. Now, whether or not you agree with this characterization of science, this sort of “feeling” towards science is at the root of its cultural cachet. Which brings us to the present moment.

In a hyper-polarized, partisan world, science is the ultimate ace up the proverbial sleeve—with science on your side, how could you possibly be wrong? The call to science is a sort of sacred invocation—“thus saith the scientific method.”

To be fair, this fault does not fall at the feet of science per se; rather, the problem is our instrumental relationship with science. We’ve transported the normatively agnostic, descriptive nature of the scientific method into a morally-laden world of prescriptive oughts in an effort to bolster our solidly non-scientific appeals. Science is no longer an arbiter between competing claims about empirical realities, but an instrument to be leveraged in the advancement of one’s personal preferences and convictions. What better way to bolster my normative entreaty than calling on the prestige of science?

And this is where a sort of tautological two-step comes in—one advances a claim about what the world ought to be and then invokes science to justify the desired end. But the appeal to science is not an appeal to any sort of disinterested empirical reality, but to a normative conceptualization of “the good” under the auspices of scientific rigor and objectivity.

This troubled relationship with science is not especially new; what is new, I think, is the clarity with which it has been exposed under the unique pressures of pandemic life. In the face of a truly novel virus, the body of scientific knowledge is relatively small—there are lots of questions and only a few answers.

This is, of course, where all knowledge begins. By necessity, knowledge under such conditions is largely provisional, open to correction, and limited. And while our initial findings are generally crude and tentative, we update our priors with each iteration of additional information, formulating new hypotheses while disproving others. This is simply how knowledge works. It is an iterative process.

That is why “following the science” in the face of a novel pandemic is so dang hard. At present, much of our knowledge is tentative, and any person with the slightest hint of epistemic humility recognizes this. When the state of knowledge about a particular phenomenon is relatively underdeveloped (e.g., the novel coronavirus), it is exceedingly easy to find a “scientific” study that says what you hoped it would say. This is necessarily much more difficult in disciplines with a more advanced body of knowledge and scholarship. For example, in 1940 one could find plenty of academics and doctors on each side of the debate as to whether smoking caused lung cancer. Eighty years later, not so much.

In short, this is why, in our present moment, we have so many voices shouting “follow the science” and then wandering off in different directions. To be clear, it is not the case that we currently know nothing about the virus, but that our claims about the impact and effects of the virus—and how to counter it—are more narrow, nuanced, and subject to change than we would like to admit. And, as we are all now keenly aware, even science at its best cannot address some of our most pressing questions: Should we re-open schools? Are severe travel restrictions necessary? What is an “essential worker” anyway? Answers to these questions may draw upon the empirical insights of scientific inquiry but, at their base, rely on wisdom, prudence, and discernment in equal measure—if not moreso—as “pure” reason and logic.

But alas, when science is reduced to a buttress for partisan appeals, epistemic humility has got to go. We’ve come to science with an agenda, a pragmatic twinkle in our eye. The problem, of course, is that we leave with a bastardized, ersatz version of science. We leave with a science “made in our own image,” an instrumentalized science undergirded by a telos of self-affirmation. The purpose of science is no longer to uncover the truth, come what may, but to leverage the perceived objectivity of science to bolster our own pseudo-scientific appeals.

The result: an absolute mess. In the disquietude and turmoil of our present moment, the desire for certainty is real and, without question, understandable. But the fact of the matter is that we are living through a profoundly uncertain time. We must be careful lest the desire for certitude compel us to instrumentalize science and thus rob science of its actual utility. When we cave to this temptation, we undercut our ability to build momentum behind actual scientific findings as they emerge.

So, of course, we should “follow the science.” But we need to have the intellectual humility—and moral fortitude—to acknowledge the provisional, incremental nature of scientific understanding. In the face of a global pandemic, science is a great tool. But we would do ourselves a favor to recognize that science can only be followed so far.

The Pandemic and the Primacy of the Household