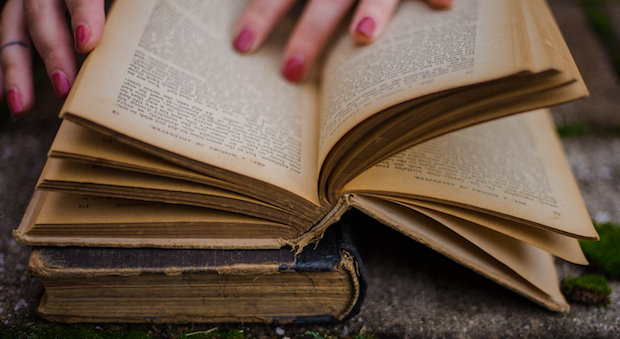 Wisdom of Sirach 44:1 “Let us now praise famous men, and our fathers that begat us.”

Ezekiel 18:2 “What do you mean by repeating this proverb concerning the land of Israel, ‘The fathers have eaten sour grapes, and the children’s teeth are set on edge?’”

West Palm Beach, FL. Alan Jacobs, author of How to Think and The Pleasure of Reading in an Age of Distraction, has a new book which invites us to try Breaking Bread with the Dead. In a world filled with short-term thinking and immediate responses, Jacobs wants us to avoid information overload by turning to the past. He argues that looking to the ideas and works of the dead can give us a tranquil mind and take us beyond a “situational approach” to life. We live in an eddy of flotsam and jetsam, with the news and social media swirling around us all day; Jacobs believes that traveling to the past can increase our “personal density” and keep us from being swept away or pulled under in the present. Breaking Bread with the Dead is full of references to literature, philosophy, and analysis of our own cultural moment.

For Jacobs, old things have a lot to offer, in part because they change our context. He writes that “to read old books is to get an education in possibility for next to nothing.” When we see the past, we are not oriented to the world from only this moment. For people who already like old books, this is a familiar idea and hopefully a lived experience. In On the Shortness of Life, the Roman philosopher Seneca encouraged learning from the dead as a way that we can learn not only from our own experiences, but those of others. He encouraged people to choose their own intellectual parents from the past. Even in ancient Rome, people thought life was too busy and chaotic, but Seneca argued that life is long, if you know how to use it.

Almost no one would argue that the way information is delivered and processed today is optimal. Everyone talks about “information overload” and the accompanying paralysis. There is widespread acknowledgement that social media and memes have not elevated our discourse on any subject. Even art is truncated, as Spotify and companies like it encourage a trend toward shorter and more simplistic songs. Many people recognize the need for an alternative to current content delivery and desire some point outside of our present moment to aid in developing perspective. But can we turn to the art of the past for that perspective and outside viewpoint? Should we?

If we are careful to avoid nostalgia about the past, we soon realize that many of our favorite books and authors from the past are imperfect and some of them are actually offensive. So many works of literature and philosophy are like the movie Holiday Inn, it’s a Bing Crosby “classic” until you remember that blackface scene. The W.H. Auden quote that Jacobs’ title borrows from says that “art is our chief means of breaking bread with the dead.” But what do we do when some of those artists resemble the family we want to avoid at Thanksgiving? Jacobs acknowledges that many people “feel defiled by the past.” Why should we share limited bookshelf or mental space with people who may hold repugnant views?

It is easy either to demand severe “consequences” with regard to the false or offensive in old books or to rant against “cancel culture.” Jacobs refuses to do either. He acknowledges that “not all works from the past are classics.” And he acknowledges that we are asking something when we ask students (or ourselves) to read books which denigrate people. But he argues that “wisdom lies in discernment, and utopianism and nostalgia alike are ways of abandoning discernment.” Some books should be left behind, but others should still be read. Jacobs believes we can practice better discernment if we rely less on “negative selection,” which sorts our seemingly unlimited choices by rejecting anything found to have a flaw. Instead, we should consider strengths and weaknesses when deciding what to read.

Breaking Bread with the Dead does not suggest that we smile through all the awkward and inappropriate moments of our meal with the dead. Jacobs believes that we should judge the people of the past, but that we can also learn to look at them as whole people who are more than the sum of their flaws. This may also give us a more realistic understanding of ourselves. We cannot “punish or reward the dead” but we can wrestle with them for their blessing, like Jacob and the angel of the Lord. Many great minds who wrote great things also had some awful ideas and did bad things. Jean-Jacques Rousseau wrote books which inspired people to cultivate their children with affection and education; his own children he sent to the orphanage. But his life and works remain vital for understanding ideas about the social contract in eighteenth century Europe. Heidegger was both an important figure in continental philosophy and a member of the Nazi Party. Alan Jacobs doesn’t want us to “sanitize” the people of the past and ignore their sins, but he is also unwilling to give up whatever good they produced despite their moral limitations.

Breaking Bread with the Dead is compelling in its argument that we should wrestle with the dead for their blessing, in part because we can choose who to wrestle. Jacobs borrows from Italo Calvino’s idea of personal “classics,” recommending that we find the author “you cannot feel indifferent to, who helps you to define yourself in relation to him, even in dispute with him.” And Jacobs is right that when we “break bread” with the dead, we are the time travelers, not the dead. What we do not like, we can leave behind.

Breaking Bread with the Dead is less compelling when Jacobs chooses to address “bad views” more directly, at one point arguing that “these views can scarcely be dignified by the term ‘belief’: they’re more like the intellectual equivalent of ambient noise, always there in the background but never noticed, never brought to consciousness for reflection.” Many of the “bad views” of the past were conscious viewpoints and the naturalness of now repugnant viewpoints is hard to assume when we can see they were fiercely debated even in the past. For example, the Quakers were petitioning Congress to end slavery in the United States before 1800. A position can simultaneously be mainstream and not uncontested.

What are the blessings of wrestling with the dead? While Jacobs opens with Horace and the promise of a tranquil mind, he also suggests that it’s easier to break bread with the dead than with our neighbors. Old books can be a good way to confront differences in opinion. And, in many ways, the dead are our neighbors, they are our neighbors in time. We can learn to extend charity toward them and then hopefully to our living neighbors, so that one day those who come after us may also judge us without rejecting all that our fallible hands have touched. While Jacobs endorses old books and takes some tips from Stoicism, he is not advocating the kind of approach to the past that looks to simply improve our “situational approach” to life, which so much of the current popularity of the Stoics seems based on. While Ryan Holiday’s books about Stoicism genuinely promote the philosophy, Stoicism is also very much part of the “life hack” and “bro-science” world of Tim Ferriss and others. In Breaking Bread with the Dead, Jacobs is clear that we do not wrestle with works of the past simply to improve our personal performance in the present.

Breaking Bread with the Dead is in some ways caught between worlds. Jacobs advocates for old books as an alternative to the present, but this book remains somewhat trapped in our time. The debates and concerns surrounding distasteful content and creators require so much addressing that Jacobs is not able to full expound on what constitutes art. Neither does he fully explore the distinctions between art, the heart of Auden’s quote, and other things from the past: artifacts, memoirs, philosophy, and political theory. This would be helpful, because if we are to wrestle with the worthwhile authors of the past for their blessing, how do we know who is worthwhile? How can the uninitiated weigh strengths and weaknesses of dead authors? Jacobs is wise to avoid offering a “canon” or a rubric as a solution, but perhaps the perplexed could use a bit more of a guide. The language of Breaking Bread is also caught between worlds, somewhere between academic and every day. And while the book makes a strong argument for sorting through the work of the past and clinging to what is substantive, it could do more to emphasize the beauty and power of old books. Breaking Bread makes an intellectual case more than it whets readers’ appetites.

These criticisms aside, 2020 is perhaps the perfect year for Breaking Bread with the Dead. There are many people in 2020 who want to escape or transform the present. The future is not available to us for escape and perspective, but the past can be, through books and art. And 2020 has seen an increase in reading, in part in response to unlearned history and unaddressed grievances. As people turn to books for education or consolation, they will only be able to choose among imperfect works by imperfect authors. If we are overly nostalgic and excuse everything, we will not learn the lessons of intervening years. If we rely too heavily on negative selection, we will not be able to visit the past at all. Alan Jacobs is right that if we would receive a blessing from the dead, we will have to wrestle with them.

Iris Chang and the Delicate Art of Remembering