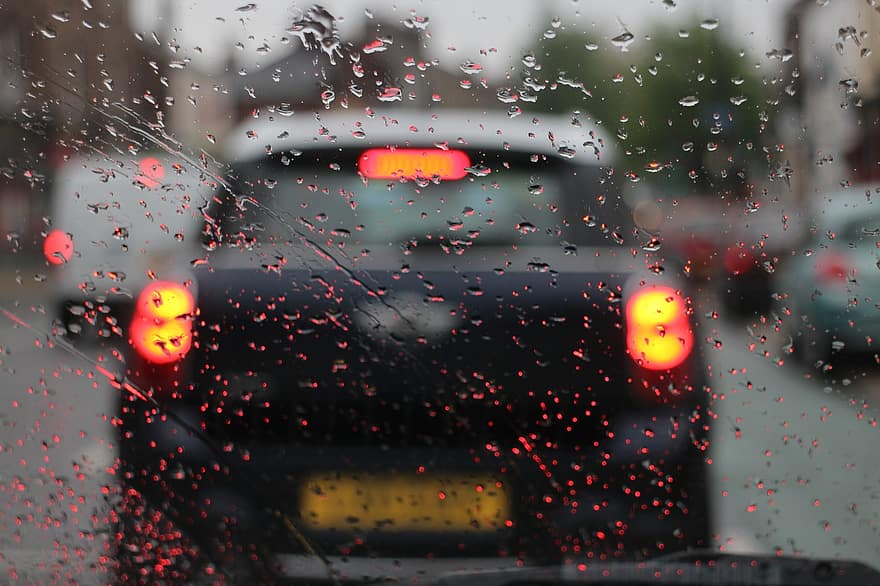 Oak Ridge, NC. I recently tried to clean my computer screen after noticing a smudge. My shirt sleeve didn’t do the trick, so I rooted around in my desk drawer for the screen-cleaning cloth that had come with my computer. It also failed to work. I dabbed the cloth in a glass of water, and redoubled my effort. The smudge remained. Twenty minutes later, after trying everything from coffee to Windex to rubbing alcohol, I realized the smudge wasn’t on my screen, but on my glasses. 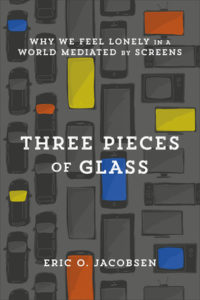 Eric Jacobsen’s vision is similarly obscured in his new book, Three Pieces of Glass, in which he labors to demonstrate that the car windshield, the television, and the smartphone “represent key choices we’ve made at the societal and individual levels to devalue face-to-face contact with other people for the sake of efficiency, autonomy, and entertainment.” His claim is largely unobjectionable, his aims mostly laudable. But the lens through which he views these pieces of glass is in need of a good polishing.

This book is written by and for evangelical Christians, which explains—but does not excuse—Jacobsen’s conviction that common sense requires biblical proof. In the introduction alone, he spends four pages biblicizing his claims that: 1) God is fine with Christians gathering outside a church setting; 2) God doesn’t mind (under certain conditions) if we gather with non-Christians; and 3) Belonging to a place and people is good for us. Beyond verse references to substantiate non-controversial claims, his book is littered with unnecessary asides like: “Obviously, redemption through consumption is antithetical to the gospel.”

A deeper problem with this book, however, is its infuriating sloppiness. In his introduction, for example, Jacobsen claims “three distinct but interconnected forces” are responsible for diminishing our sense of belonging. Given the book’s title, one assumes these three forces are his pieces of glass—TVs, phones, and windshields. But no, these glass items are now a single, “centrifugal force that pulls us inward” (he means centripetal). His second force isn’t really a force at all, but a trend: the declining availability and use of civic gathering spaces, which later he blames on his three pieces of glass, suggesting it needn’t be listed alongside them as a separate force. His third force is “the frenetic pace that has taken over our lives,” a condition declaimed by social critics since the dawn of the Industrial Age as something new to their generation. This causal confusion persists throughout the book.

Next, Jacobsen defines belonging as “a sense of fitting in with a particular place, a particular group of people, and/or with the ethos or narrative of a place.” It’s passable if we don’t look too closely (the and/or is enough to give a philosopher fits). But he doesn’t leave well enough alone. By the time he’s done, we will have been introduced to four levels of belonging (intimate, personal, social, public), two inferior types of belonging (incremental, “empty-calorie”), two superior types (kingdom belonging, community belonging), and various belonging contexts (in relationship, in place, in stories). Jacobsen marches us toward a Reformed Protestant checklist for belonging whose first criterion is “unconditional” as defined by Calvinists (“neither earned nor deserved”), which is the literal opposite of how thriving human communities are cultivated, depending as they do on members earning and deserving their place.

And so we move from confusion to confusion, with Jacobsen dipping his toe into a deep topic only to withdraw it, his attention suddenly drawn elsewhere. “Why are we so busy all the time?” he asks. Fear of death is the answer he lands on, only to back immediately away: “Regardless of whether a fear of death is behind the busy condition,” he writes, we’re busy. Then he jumps to other causes: fragmentation, consumerism, acedia. It gets worse; by the end of the chapter, he’s blaming the acedia on the fragmentation and consumerism. In Jacobsen’s narrative a primary cause is a possible cause is a consequence is an OH LOOK, A SQUIRREL.

Jacobsen’s meandering in search of a thesis about one of his three pieces of glass, the automobile windshield, offers more proof of confusion so profound that, in all fairness, it should be laid equally at the feet of his editors. “A society,” he writes, “that prioritizes driving as a mode of transportation doesn’t value community or belonging very highly.” This claim is, of course, nonsense. Jacobsen has in mind how driving carries us away from our homes and neighborhoods, past people who will remain strangers so long as we’re encased in our steel and glass cages. But where are we going? Quite often to church, to visit family, to be with friends, to interact with customers and colleagues. Once a month, I host a men’s group at my house. On those nights, my driveway and side yards are filled with cars, all because their drivers value community and belonging very highly indeed.

“I’m not suggesting,” he writes, “that driving is altogether bad…” (his book is riven with such course corrections and disclaimers). “The reason that driving isn’t deadly to faith,” he explains, “is that it is but one of a great many formative activities in which we are engaged.” (Does the word activity ever not imply engagement? If Jacobsen’s editors weren’t going to challenge his logic, they might at least have improved his diction.) This new claim does not, of course, refute the position Jacobsen has just spent pages establishing, namely that driving is, indeed, altogether bad. It means, rather, that the deleterious effects of driving on the individual may be offset by other, beneficial practices.

But here comes another logical shift: Driving can not only be compensated for via other beneficial activities, it can be positively redeemed: “If we focus attention on Christ as our Lord and allow the Holy Spirit to form us and work through us, our engagements will serve as crucibles and help form us in the image of Christ.” Now we find ourselves on familiar terrain, smashing away with Martin Luther at the artificial distinction between sacred and secular. Just as a father faithfully changing diapers elicits God’s smile, so might we do on our daily commute, provided our heart attitudes are right.

But then what becomes of Jacobsen’s thesis? Is driving bad for the soul, or not? “What I suggest here is that a disciple who drives often may well be a mature disciple but may also struggle with a certain kind of loneliness or lack of belonging as a consequence of spending an inordinate amount of time in an automobile.” This is Jacobsen’s book in a nutshell: indeterminate language (“suggest;” “may struggle;” an undefined “certain kind”) that appears to contradict claims still fresh on the prior page. With the right spirit, he now seems to say, our activities may “form us in the image of Christ”—except maybe they’ll do the opposite.

Eventually we find ourselves doing doughnuts in a parking lot, with Jacobsen at the wheel. Now he likens driving to frequent mall shopping: It “will have a persistently corrosive effect on the disciple’s Christ-formed self-understanding.” Depending, he says in the very next sentence, on how “wholeheartedly” the Christian “participates in this liturgy.”

This seems like an apt moment for a Bible verse: “To the pure, all things are pure, but to the defiled and unbelieving, nothing is pure.” In a book that began with Bible verses proffered to confirm the simplest of assertions, can we not now deploy a verse to settle this matter? There’s no putting a scriptural stake through the heart of Jacobsen’s thesis about cars, however, because there’s no laying hold of his thesis. “My assertion,” he writes immediately after the foregoing claim that the heart a Christian brings to mall-going or car-driving determines their corrosive effects, “is a bit more involved than this, since the current crisis of loneliness and belonging is caused primarily by larger cultural trends arising from societal decisions to focus on driving.”

Jesus, take the wheel. Is driving the culprit Jacobsen has spent the preceding pages making it out to be? Or is it an artifact, a distant cause rooted in society’s decision “to focus on driving”—whatever that means, and however societies decide things like that—which unleashed “cultural trends” that will be alluded to or vaguely named in the remainder of Jacobsen’s book, but never with definition or clarity? And is it the driving that is the problem, or the fact that driving carries us away from neighbors and immediate family? Best I can tell, Jacobsen believes both are bad. This is an entirely plausible point of view. The fact that he shifts from one to the other with no apparent awareness that they are very different theses, however, gives one little confidence in his diagnosis or his prescriptions.

Jacobsen’s topics evoke interesting ideas, and we know this because thoughtful writers have already considered them. He neglects these writers to his detriment. Surely Neil Postman’s observation that television “has made entertainment itself the natural format for the representation of all experience,” especially in light of how smartphones have made so many of us producers as well as consumers of content, marks a rich vein Jacobsen might have mined for his thesis about modern self-alienation. Marshall McLuhan’s “the medium is the message,” Jean Baudrillard’s notion that we progressively depart from grounded reality via our media simulacra—these are notions highly relevant to Jacobsen’s pieces of glass. Yet he shows no sign of having read any of these thinkers.

A saying we have in the South is that you ought not go around your elbow to get to your thumb. But if you’re going to make the trip, for the love of God, make it interesting. This book, unfortunately, heeds neither admonition.

American Enthusiasts At The Gates: A Review of D.G. Hart’s From...