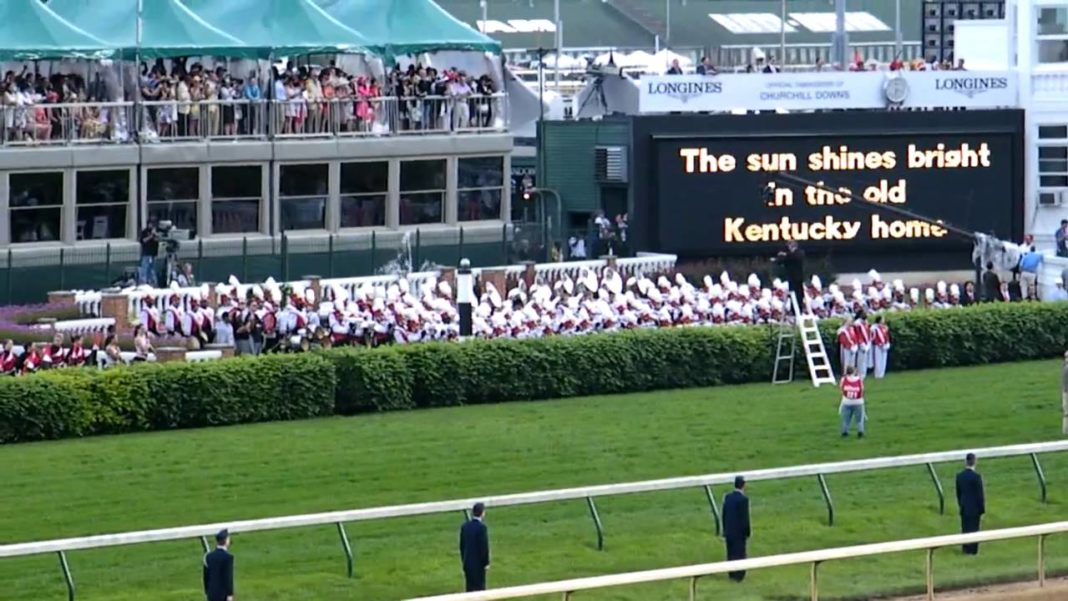 Louisville, KY. Every American state except New Jersey has an official state song, and of that long list, only a few tunes stand out. Among them are “Georgia on My Mind,” Florida’s “Old Folks at Home (Sewanee River),” and “Yankee Doodle,” which Connecticut claims, though many of us would consider it part of our national inheritance. Most of the rest are largely obscure, even within their own states.

But not “My Old Kentucky Home.” Written by Stephen Foster in the 1850s, it has been popular ever since it appeared. Over the years a number of non-Kentuckians have recorded it, and even more have sung it, many of them at the Kentucky Derby, where the song has been played and sung before the Derby’s post parade for almost a hundred years. It is certainly the only song, state or otherwise, to be performed by a mix of singers that includes Paul Robeson, Judy Garland, and Warren Zevon.

Today, its lyrics and history are at issue. Published the year after Harriet Beecher Stowe’s Uncle Tom’s Cabin, and given the original title of “Poor Old Uncle Tom, Good Night!” the song clearly seems to have been inspired by the book’s title character. Its lyrics are written from the perspective of a slave grieving for a home he will soon be forced to leave. Here is the rarely-sung third verse with the original lyrics (in 1986, the belittling word was changed to “people” in Kentucky’s official version of the song):

The head must bow and the back will have to bend,
Wherever the darkies may go.
A few more days and the trouble all will end,
In the field where the sugar-canes grow.
A few more days for to tote the weary load,
No matter ’twill never be light.
A few more days till we totter on the road,
Then my old Kentucky home, good-night!

Sugarcane has never been a crop grown in Kentucky. The inference is that the singer is going to be sold down the river to work at a plantation far away from all he loves—and where he expects to die.

As such, then, this song gave voice—in 1853—to the grief of enslaved people, in a way that was sympathetic to their plight. That was certainly Frederick Douglass’ reading of it. In an 1855 lecture titled “The Anti-Slavery Movement” that is part of his autobiographical book My Bondage and My Freedom, he names “Old Kentucky Home” as one of the “songs that constitute our national music. . . . They are heart songs, and the finest feelings of human nature are expressed in them. [They] can make the heart sad as well as merry, and can call forth a tear as well as a smile. They awaken the sympathies for the slave in which anti-slavery principles take root and flourish.”

While criticism of the song is not new, this year, in the aftermath of our civil unrest, that criticism has gotten louder. One Courier-Journal columnist can’t forgive the song the use of the word “darkies” in the original version. (Paul Robeson, the son of a former slave and no political conservative, sang the original lyrics.)

Others dismiss the song because in the 1800s it was sung by white singers in blackface, and any minstrel show association is grounds for canceling, no matter what the message of the music. For others the tragic circumstances the song describes are themselves grounds for silencing it—as though by not singing a song critical of slavery we are somehow better honoring the memory of the enslaved. And so one way and another the call has come this spring for Kentucky officially to turn its back on “My Old Kentucky Home,” and for Churchill Downs to stop playing it.

Every well-known song does indeed have a history that will affect our feelings about it. But we should remember that the life of “My Old Kentucky Home” didn’t end with the 19th century, and it is important for us to acknowledge that this song in particular has a long history of associations and meanings.

All art is a conversation. It is begun by the artist, whose intent we have an obligation to try to discern, if we are at all serious about understanding a work, because the purpose of art is to communicate something the artist is moved to express. The discussion an artist begins is then taken up by those who experience or recreate the art in some way—in this case, those of us who listen to “My Old Kentucky Home” and sing it. Over time there have been many of us, and in singing it we have changed it. What those changes mean to the song and to its singers is worth considering.

There is an excellent 2004 collection of Stephen Foster songs called Beautiful Dreamer, and on it John Prine sings “My Old Kentucky Home” with lyrics as they are generally used today:

Oh, the sun shines bright on my old Kentucky home
‘Tis summer, the old folks are gay
Where the corn top’s ripe and the meadow’s in the bloom
While the birds make music all the day

Well the young folks roll all around the cabin floor
They’re merry, all happy and bright
By-and-by hard times will come a-knocking at my door
Then my old Kentucky home, goodnight

With the revised lyrics of “old folks” and “people”—changed to take the sting out of an offensive term—and shortened to just the original first verse split in two, “My Old Kentucky Home” is now no longer necessarily written in the voice of a slave. It’s been universalized, certainly for all Kentuckians, but really for everyone. Whatever our color or life or place of origin, we can all sing of our longing for home, our love of the natural world, our delight in children, and our loss.

And that is part of the strength of this song. I love it as written, the way Paul Robeson sings it, but I gladly sing this wider-ranging version as well. That is because the emotion Stephen Foster originally conveyed in the voice of a slave is one we can all give voice to. None of us has lived life in slavery. But all of us have known grief and separation from those we love, and we all face the prospect of our own death. Stephen Foster’s words, Uncle Tom’s words, an unnamed slave’s words—they express human experiences common to all of us, and that means those words can also be ours.

“My Old Kentucky Home” expresses the love I have for my home and my state in a way I find moving every time I hear it. And as I look around, whenever it is played, I see I am not alone. Frederick Douglass was right; it is a song that evokes both sorrow and the memory of joy. Like all beautiful songs, it is a gift. It honors both a piece of the hard past of our state and our lives in the present. I will always sing it.

This article also appeared on arts-louisville.com.