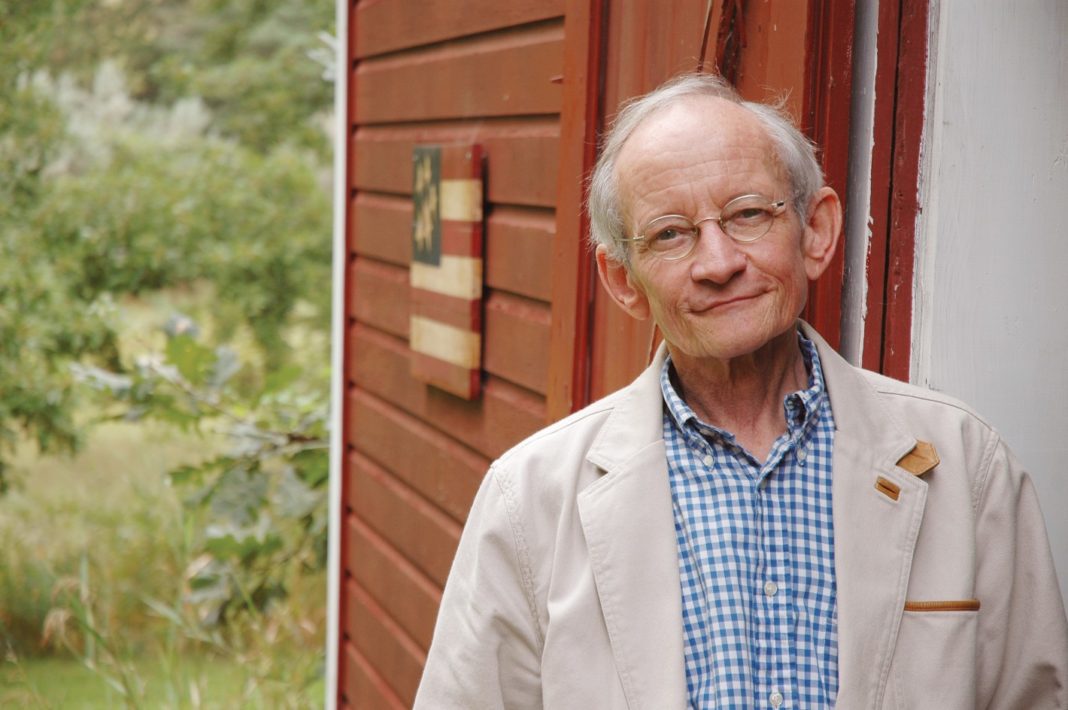 Leeds, MA. W.H. Auden once said that at a certain point in a poet’s career, he must change course in order to avoid plagiarizing himself. It’s always interesting to read those poets who do not follow Auden’s advice; poets who wear deep grooves in the tracks of their imaginations, circling back over the same themes, preoccupations, and obsessions that have marked their work for decades. Red Stilts is Kooser’s seventeenth book of poetry. Here is vintage Kooser. Once again, we see the clear lines and ordinary syntax that we have come to expect. The verse seems deliberately uninventive. “If it ain’t broke, don’t fix it” goes the old saying. Kooser uses a free verse line that often approaches then evades the iambic tetrameter. More often than not, the poems are presented as large blocks of text. Ordinary and unrefined, they suggest the steady hand of a craftsman who doesn’t need to go looking for the next big thing. His instrument works just fine and it’s in tune. Every poem in this collection is good, many of them great, even if none of them break the sound barrier.

Human beings cannot help but change. We do not have to go looking for it. Kooser is an old man now, and these poems reflect that. “Seventy years ago” is a common refrain throughout the book, as in the title poem, which begins “Seventy years ago I made a pair of stilts / from six-foot two by-twos.” This is Kooser’s version of the ars poetica. In this image of youthful imagination, making something joyful out of whatever came to hand, Kooser shows us how he makes a poem. Naturally, Kooser’s memory is longer now— there is much more behind him than ahead. We see this in “Farm Wagon” where he rocks an old wagon out of the dents in the ground its wheels have made until it “slowly starts to roll / down the slope of this poem.” “I want you to see what I see,” he tells the reader, “before it rolls over the edge.” For Kooser poetry is, as it was for Frost, a means of “remembering what it would impoverish us to forget” or as “Farm Wagon” concludes:

now you might say I’ve unharnessed the past,
and it may well leap out from the willow bank,
out over this second-to-last line with its dry creek
below, and, with luck, rattle on into forever.

As might be expected for a poet with more behind him than ahead, this book has its share of elegies. But these again are steady affairs. Kooser isn’t rummaging around the word-horde trawling for pathos. There’s pathos enough in the everyday, in “a dish-towel curtain / slack as a shroud on the icy glass” or in “Winter Deaths” where he makes use of the old Pathetic Fallacy. For all that, this is a joyful book, one that recognizes the courage in finding hope. In “House Moving” a sad scenario— a house, jacked-up for the winter waiting to be moved— becomes the site of renewal:

If one of us had the guts to crawl in under
that cold blue shadow, pressing its four supports
into the sucking earth, I think we’d find
a breath of what was new here once, and fragrant,
still up there on the bottom side of time.

The real poet finds space to redeem lost time. The elegy is easy. So easy we don’t even register it anymore. It is a given that poetry is sad. Blame Wordsworth. Kooser is an anti-romantic. In this, he is very much a natural descendant of William Carlos Williams. For the Romantic the poet stands, a solitary genius, aloof from society. Kooser, like Williams, is integral to it. He is not a genius but a craftsman—think of Williams’ provocative statement that a poem is “a machine made out of words.” A Kooser poem is a dispatch from small-town America. Flyover country. For him, as it should be for us, a man standing at a bulletin board outside of the grocery store is worth documenting. In his essay “Poetry as Enchantment,” Dana Gioia claimed that “[t]he aim of poetry—in this primal and primary sense as enchantment—is to awaken us to a fuller sense of our own humanity in both its social and individual aspects.” Red Stilts does just that. Kooser isn’t often alone in these poems. Sometimes the connection with the other is intimate as in “Ohio Blue Tip” where he reflects on the way his friend lit a pipe. Other times the connection is more distant, as when he observes three strangers on the side of the highway where he declares “I could in that instant feel / something common between us, among us, / around us, within us” then concludes “[i]t was more than / a light April rain playing over a road.” In this oblique reference to The Canterbury Tales Kooser reminds us that it is our common suffering, our mutual dependence, our being rained on, that builds community as we journey together.

This sort of poetry is not without its critics. David Yezzi wrote that Kooser’s style is symptomatic of the malaise of contemporary poetry in general. Calling it “a kind of easy listening, what a musically minded colleague calls Adult Contemporary, after the popular strain of innocuous soft rock. . . . It is poetry to accompany your day not disrupt it, to keep one entertained on that long car ride through life.” While I actually sympathize with Yezzi’s point—Kooser and his contemporaries do not represent the full range of human emotion and are perhaps even driven by market forces—even still, we can’t all be Geoffrey Hill. Now, Hill is probably the better poet, and a poet I’m content to read no more than twice a year. If Hill carves altars, fit for a cathedral, Kooser makes a kitchen table. I’ve often thought that a table was a fitting analogy for a poem. If we talked about poetry the way we talk about furniture-making or any other trade, we wouldn’t be talking so much nonsense. A table is useful. Most poems are not. A table’s parts make up a coherent whole, as too few poems do. It is necessarily balanced. A table is a place where people come together. In Kooser’s case, poetry can offer an occasion to gather, if not literally, then in the mutual understanding of a shared language, shared concepts, and the shared meaning that Kooser trusts us to make out of what he has given us.