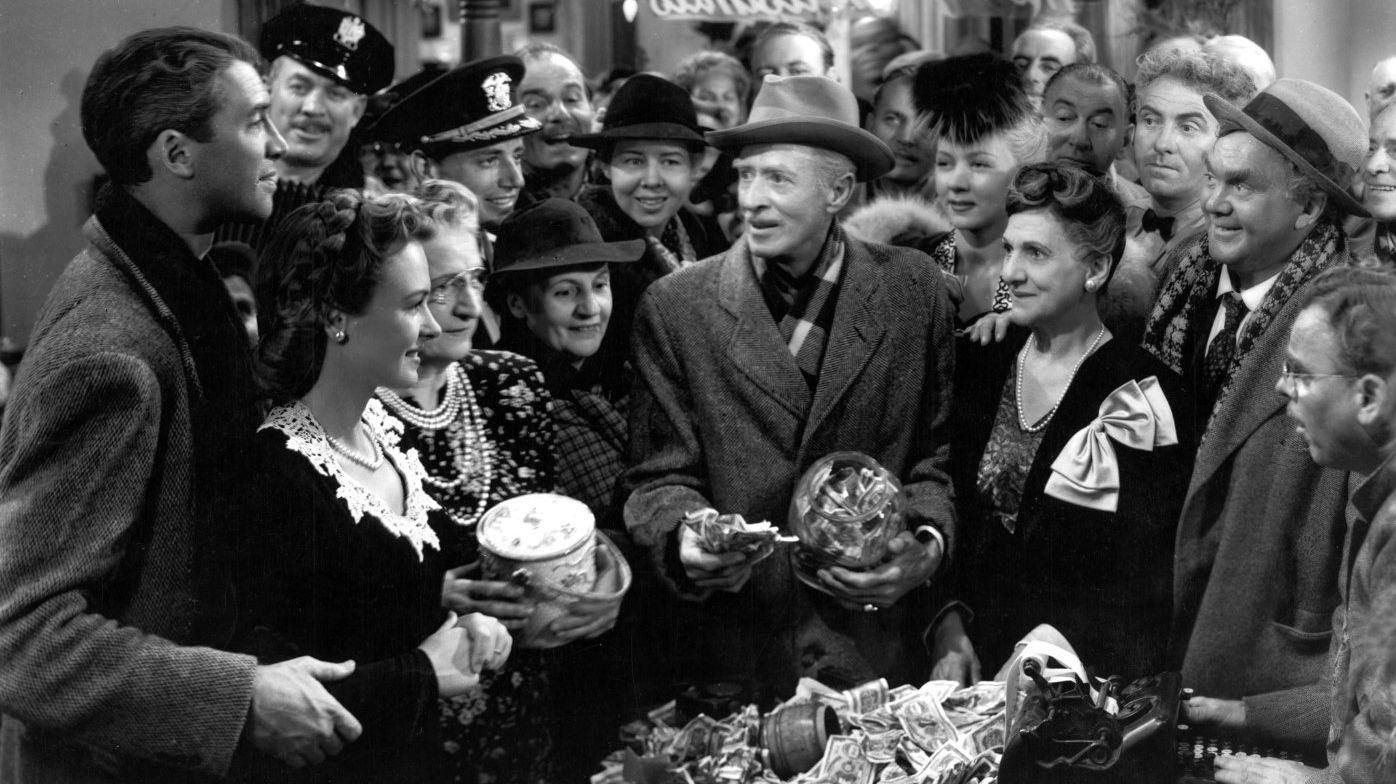 Emmitsburg, MD. As George Bailey runs down Genesee Street in Bedford Falls in the penultimate scene of It’s a Wonderful Life, he wishes an effusive merry Christmas to his neighbors, the movie house, the emporium, the building and loan, and, with his typical generosity of spirit, to Mr. Potter, the town’s greedy Scrooge whose vicious secularism and disdain for “sentimental hogwash” prompt him in turn to offer Mr. Bailey a happy new year.

What does this uplifting scene tell us about Frank Capra, the film’s Catholic director and producer? It tells us that he understood the importance of institutions, particularly those intermediary organizations that sustain and strengthen civil society. George offers his joyful holiday greetings to these institutions as if they were persons, bodies that saw his town through good and bad, through war and peace. Capra is surely not endorsing some sort of unrestrained capitalism in this nod to institutions. On the contrary, the entire film is predicated on the bare necessity of communitarian cooperation and the tremendous personal and social gifts that come from personal sacrifice accomplished for the sake of the community. Indeed, Capra based the success of institutions on the proper ordering of the persons who make up those institutions; that is, he based these institutions on the family.

This principle is expressed artistically in the famous scene during which George Bailey and Mary Hatch walk home from the high school dance under the bright moon. While George verbosely describes his plans to achieve earthly glory and material success, Mary interrupts his speech with her pitch of a rock at the glass of an old house across the street. Her wish with that toss was that this entrepreneurial man and she would one day marry and live in the fixed-up version of this romantic house. Mary redirects the scene and more strictly defines the good life for herself and her future groom. Instead of entertaining his starry-eyed dreams, she confirms the notion that the wonderful lies within the mundane and that a desire to achieve the extraordinary can be best applied within the limits of seemingly ordinary circumstances.

While Mary Hatch might not have come to these conclusions herself (a theoretical understanding of these principles is certainly not necessary for the practical ability to live them out), it was this proper ordering of human goods that led to the triumphant ultimate scene of the film. People and their families and their friends and neighbors “heard [George] was in trouble . . . [and] didn’t ask any questions.” Stubborn critics identify this generosity as a self-imposed implementation of socialism. A more charitable and refreshing interpretation regards this scene as evidence of the kind of human interaction that can occur when institutions fulfill their function of bringing about the happiness of the persons who make them up, or from the more demanding Catholic perspective, the salvation of souls. Uncle Billy shows up at that scene in part because he is family but also because of their mutual work at the building and loan. Giuseppe Martini knows him from the bar, Mr. Gower from the drug store, Sam Wainwright from school, Annie from his home, Ernie from the taxi. The list goes on. All these people lived alongside George within the institutions built by a certain mission, the local culture, and enduring customs.

It seems evident that these people would not have shown up for George if Bedford Falls had become the promiscuous, usurious, and drunken Pottersville displayed during his nightmare. These buildings along Genesee Street would fulfill no greater function than allowing a reprobate town to indulge in the predictable products of sex, money, and alcohol in exchange for the soul of its people. The film suggests, though, that if George’s fleeting wish that he had never been born was true, all of that structural denigration of Bedford Falls might, or would, have happened. The very presence of George Bailey preserved the town’s institutions from unrestrained individualistic hedonism. In this way, Capra fulfilled the requirements to showcase a true hero. It was not George’s chosen actions necessarily that preserved the town; he faces very few internal conflicts throughout the film. All of his heroic actions are instinctual, habitual, and therefore, virtuous. Saving his brother Harry in the ice water, confronting a distressed Mr. Gower and even rescuing his guardian angel Clarence were all knee-jerk reactions on the part of a character who was not so much “doing” but rather “being” as he had been formed by the town’s institutions.

The young George Bailey had his eyes set on the Fiji Islands and the Coral Sea, the adolescent on building airfields, skyscrapers, and “bridges a mile long.” Later in his life, when he was in the impossible position of having to retrieve a stolen sum of $8,000 (over $115,000 in today’s money), he is saved by the institutions in which he invested throughout his life. Certainly without intending it, and possibly without knowing it, he found himself in a mutually formative and beneficial relationship with the people of Bedford Falls through their shared institutions. Because of this community, the film is able to end the same way it began: with a prayer, joining the herald angels in announcing the birth of the newborn King.