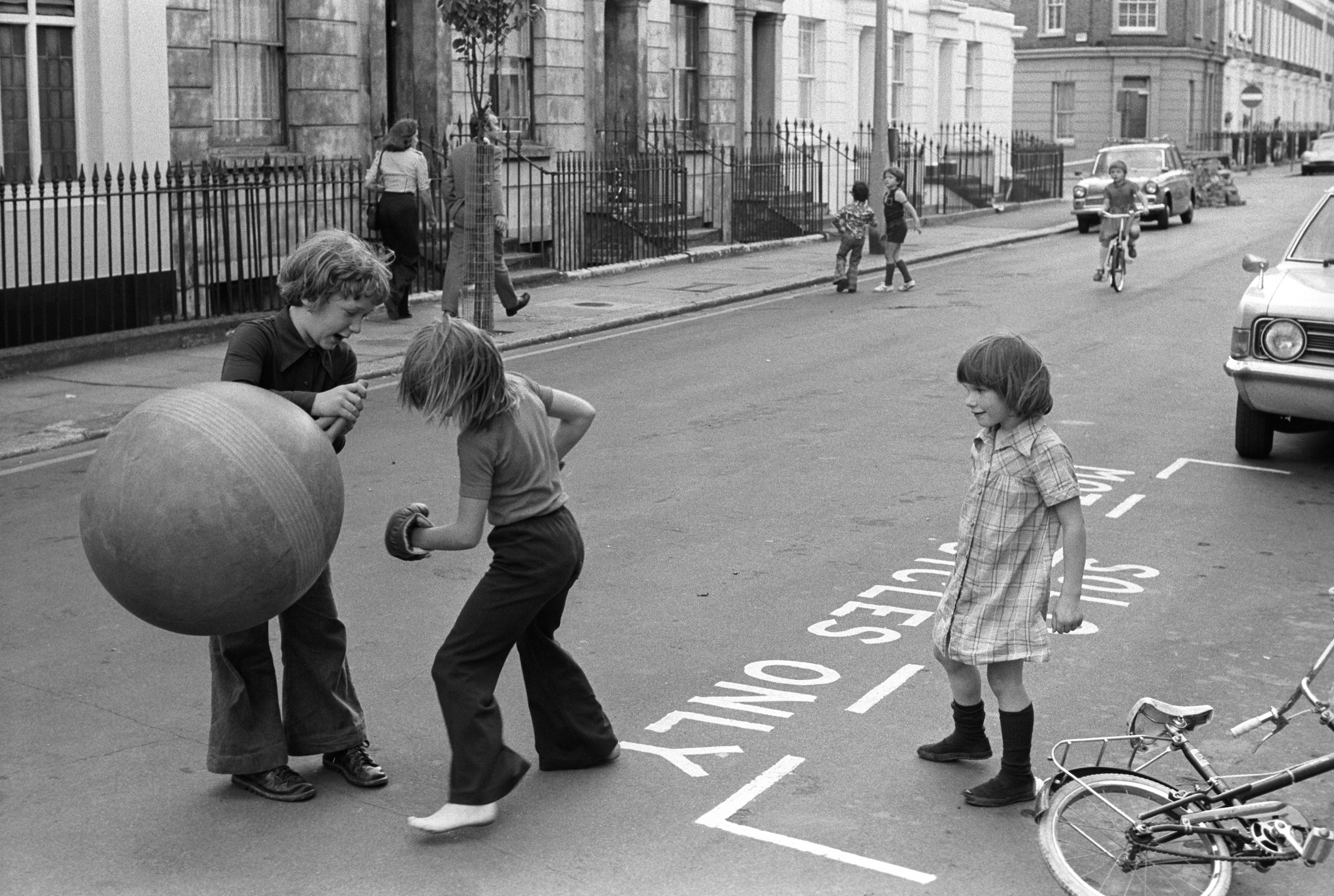 County Kildare, Ireland. Recorded history is the history of adults–generals, statesmen, explorers and scientists–but all of those adults began their path as children. And running beneath this official history is the unofficial history of childhood games and rituals, many of which were passed down for generations; children inhabited a separate universe of traditions, contests, solemn rituals and codes of honour, like a Viking horde living in your house unnoticed. It was in this world that every future general first learned to lead, every future scientist first turned over logs to delight in the tiny nightmares underneath, and every future explorer first plucked up the courage to enter the haunted woods. Elderly people here in Ireland, who grew up without electricity or many cars, still remember the feral exploration and creative play that was once the birthright of every child.

“Children today don’t have to think much about games given to them – we made up our own,” said one elder. “We played spin the top, marbles, hoop the hoop, hop scotch, conkers, kick the can, scut the whip, jackstones, and box the fox. Hop scotch has survived to some extent, but only among girls … Even when the dark evenings closed in we played ‘Battle In, Battle Out,’ and ‘Jack jack show the light.’”

The games varied widely from person to person; villages only a few miles away could apparently have very different game-traditions. City streets, perhaps because they drew families from so many rural villages, seem to have been a vast melting pot of such games; when British novelist Norman Douglas published his whimsical overview of the children’s games of London in 1916, he spent dozens of pages–most of the book–just listing games. Not dozens of games, mind you–dozens of pages of lists of games, any of which could be as complex as any video game today and most of which were known to most children.

The games, rhymes, and rituals children invented were so ubiquitous, and so often out of sight of adults, that they were little remarked upon or recorded, and only now, when they have almost disappeared, can we look back and see how remarkable they were. In the 1950s the husband-and-wife team of Peter and Iona Opie interviewed children on playgrounds around the UK and found that, instead of being silly and spontaneous, children’s rhymes and stories actually preserved historical traditions their parents had lost.

“Boys continue to crack jokes that Swift collected from his friends in Queen Anne’s time,” Opie wrote. “They ask riddles which were posed when Henry VIII was a boy. . . . They learn to cure warts . . . after the manner which Francis Bacon learned when he was young. . . . They rebuke one of their number who seeks back a gift with a couplet known in Shakespeare’s day. . . . and they are [perpetuating stories] which were gossip in Elizabethan times.” They re-discovered the observation of Queen Anne’s physician John Arbuthnot, who said that “nowhere was tradition preserved pure and uncorrupt but amongst school-boys, whose games and plays are delivered down invariably from one generation to another.”

This is especially remarkable since most of these rituals were not taught by parents or grandparents, who might have learned them decades earlier, but by other children who could only have known them for a few years. Since they were re-transmitted over years rather than decades, their transmission signal should have decayed more quickly. Instead, the children proved stronger at retaining historical knowledge than most adults–not in the sense of reciting facts, but in treasuring their past.

Some of their superstitions, like a blister as proof of lying, date back at least to the 1500s, and they chanted a rhyme that apparently dates back to the era of France’s Henry IV in 1610. Most interestingly, country children still wore oak leaves or an acorn in their button-holes on 29 May to remember the return of Charles II in 1651–and could explain why they did so–at a time when few adults remembered the date.

Keep in mind, also, that few people were writing in the 1500s, most writing was not about children’s games, and much of what was written then has been lost–so if a ritual was first recorded in the 1500s, it could well be much older. Oral traditions can endure for thousands or even tens of thousands of years; Australian Aborigines have traditions about the sea level changing that seem to date from the last Ice Age. No one knows if any children’s rhymes and games date back so far, but Douglas believed that one chant stretched back to the time of Nero, and the Opies seemed to agree.

Their games and rituals were still very local, even in the 1950s when mass media was already washing away the local cultures of villages and neighbourhoods. “While some children roll eggs at Easter,” the Opies wrote, “or nettle the legs of classmates on the 29th of May, or leave little gifts on people’s doorsteps on St. Valentine’s Day, or act under the delusion that they are above the law on a night in November, other children, sometimes living only the other side of a hill, will have no knowledge of these activities.”

Here, too, Ireland held onto this heritage later than most countries, and a radio documentary of children playing in a Dublin school-yard in 1977 showed them using their own complicated musical chants. They weren’t all local traditions–one chant cited Shirley Temple, “the girl with the curly hair”–but even that showed the staying power of these songs, as this was two generations after she had been famous.

The Opies also noted that children spontaneously adopted a “code of oral legislation”–cultural institutions for testing truthfulness, swearing affirmation, making bets and bargains, and determining the ownership of property–the adult legal code in miniature. These codes universally included a practice absent from adult law, however–that of asking for respite, what we recognize as “calling time out,” and what today’s children reportedly call “pause,” a usage imported from video games.

“Throughout history, bands of children gathered and roamed city streets and countrysides, forming their own societies each with its own customs, legal rules and procedures, parodies, politics, beliefs, and art,” the blog Carcinisation pointed out. “With their rhymes, songs, and symbols, they created and elaborated the meaning of their local landscape and culture, practicing for the adult work of the same nature. We are left with only remnants and echoes of a once-magnificent network of children’s cultures, capable of impressive feats of coordination.”

This seems to have been true of all human cultures–anthropologists report it in hunter-gather tribes, and Zechariah 8:5 said that “the streets of the city shall be full of boys and girls playing.” Certainly it was true among people I knew in Ireland or the USA in living memory. To see how recently outdoor play was assumed, look at a map of most American cities; anything built before World War II is typically a grid for easy transport, but post-war suburban streets curl like tossed spaghetti and end in cul-de-sacs in order to do the opposite, to slow and discourage traffic to be “safe for families.” The sprawl that covers much of America looks the way it does because it was made to be safe for children to play in the street–which in 1945 was exactly what they would be doing.

If the returning GIs who first moved into these homes could be transported to the present day, however, they would be puzzled. Aside from the fact that the future never happened–no flying cars or robot butlers–the most glaring difference would be the absence of any children. To a time traveler it would seem like the beginning of a Twilight Zone episode, and they’d would demand to know what happened–was there a plague? An alien invasion? Are the children grown from pods now? Are they marched to an altar and sacrificed to a dark god? Or is this some horrific science-fiction future where children grow up staring at glowing rectangles, and are drugged when they get restless?

“Even the idea of a children’s game seems to be slipping from our grasp,” Neil Postman wrote in 1982. “A children’s game, as we used to think of it, requires no instructors or umpires or spectators; it uses whatever space and equipment are at hand; it is played for no other reason than pleasure. . . . Who has seen anyone over the age of nine playing Jacks, Johnny on the Pony, Blindman’s Buff, or ball-bouncing rhymes? . . . Even Hide-and-Seek, which was played in Periclean Athens more than two thousand years ago, has now almost completely disappeared from the repertoire of self-organized children’s amusements. Children’s games, in a phrase, are an endangered species.”

The decline began a few generations ago, when television steamrolled over children’s cultural traditions, and that screen has now multiplied into a billion hand-held ones. When children everywhere carry all the world’s pornography in their pocket, as well as electronic games psychologically designed to addict people as powerfully as heroin, few future leaders will organise their mates, and few budding scientists will turn over any logs. Moreover, children today grow up under effective house arrest, as local ordinances, paranoid neighbours and police conspire to prohibit children from venturing far outside. They grow up learning no lessons, organising no peers, and exploring no territory, unless it be shifting electrons around a screen, and the screen becomes their world.

This unnatural state takes all the power of modern society to maintain, and it does not have to be inevitable or permanent; even now some parents keep their children unplugged and gather with other parents who do the same. If they don’t live near the country themselves, they might visit family who do. They teach small children some games from old books, and let the children take it from there. How this guerrilla action proceeds will depend on the situation, but it needs to be done. Otherwise, today’s children will live in a country filled with the most dependent and least self-sufficient humans who ever lived, polarised and paralysed by their screens, and facing a difficult future. We will need a new generation of people who can strategise, negotiate, and work together again, and to do that we need children to experience childhood once more.

The Creative Promise of Less-Sung Places