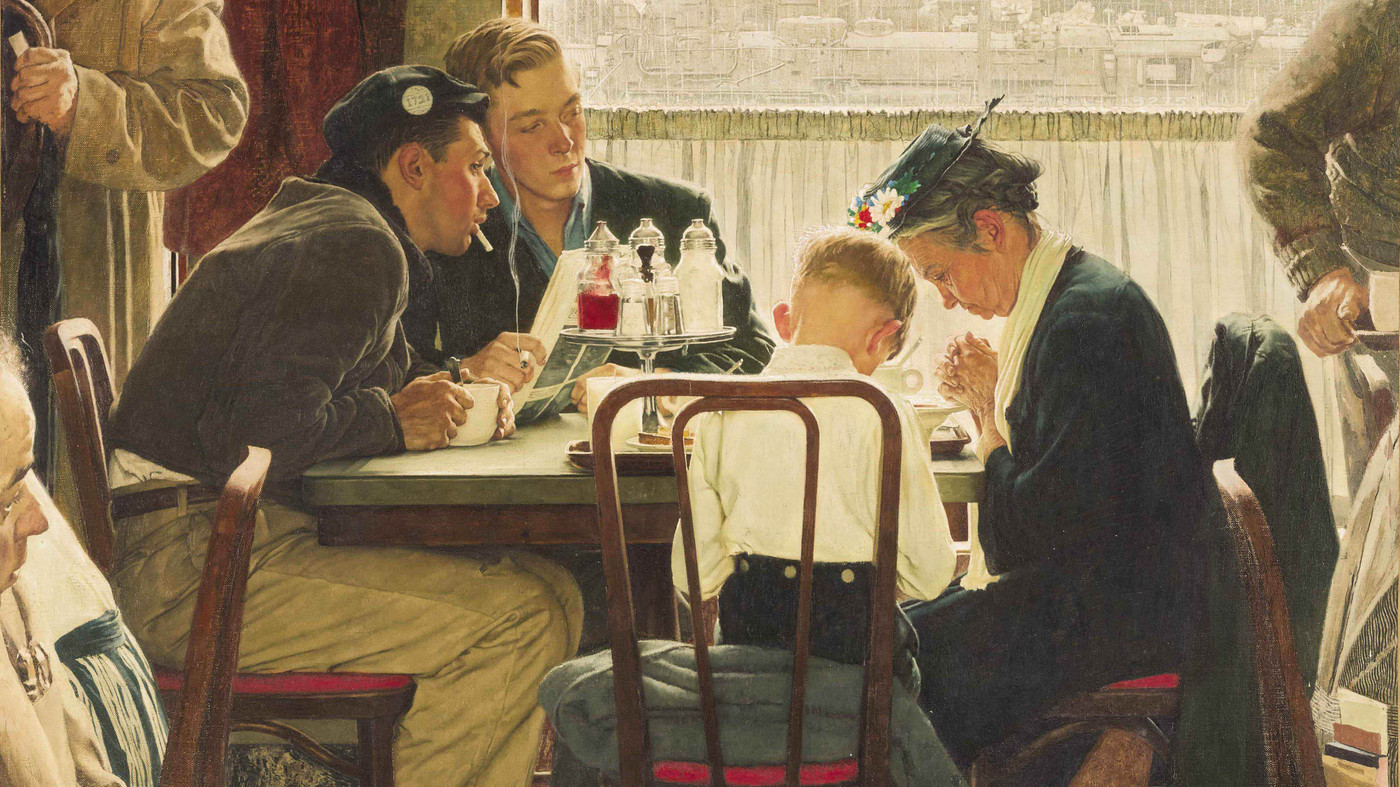 Millard County, UT. “Don’t eat anything! We haven’t had a blessing,” my grandma would say as I tried sneaking a roll from the kitchen.

Even to my young ears the phrase sounded anachronistic. What difference did a blessing make? It wasn’t as if some magic transfiguration of the food occurred following a prayer. That phrase, along with my grandma’s frequent warnings about “spoiling my supper,” may have prevented me from snitching much food pre-prayer at my grandparents’ house, but it held little sway over my behavior at home.

It took me a while to see the wisdom embedded within my grandmother’s words, in part because I spent my childhood as a competitive swimmer. I could afford to eat and eat whenever I wanted, especially when I was feeling down, because I had nine swim practices a week. But when I quit swimming and started college, I quickly gained the “Freshman 15” and became as soft as a marshmallow. I knocked off those extra pounds the following summer, mostly by swimming, but this pattern of weight loss and gain would continue.

My relationship with food was—and still is—troubled, a realization that has come only with time, and after discovering multiple times that my expanding waistline has left me with only a few pairs of pants that fit. I hate clothes shopping more than I love comfort eating, so whenever I get to this point, I slow down my food consumption and ramp up the exercise. I now understand that I have used food as an emotional crutch since my youth, and I now recognize that my grandmother’s admonishments were not relics of some authoritarian tradition but a cultural defense that I had failed to appreciate.

The author Matthew Crawford explains that these cultural protections serve as a type of cultural jig. Crawford derives this concept from a physical jig, using the example of a setup for cutting boards to an equal length. Instead of measuring each board individually to be cut, the jig (a straight-line guide that can be made from a row of cinderblocks or a clamped down board) directs each piece of wood down the same path for uniform results. It requires much less energy and produces a superior product than measuring each board on its own. A cultural jig, as Crawford extrapolates, can serve as a restraint embedded within a culture that protects humans and communities from potential pitfalls. Many of our cultural jigs have been hollowed out and been replaced by commodified services, available only to the few with the financial resources to pay for them.[1] One could argue that my increasingly tight pants straining at my expanded midsection serve as a moderately effective personal jig, but it still doesn’t get to the root of my weight fluctuations. The cultural jigs are much more powerful than personal jigs: they are free to all, build character, and provide guardrails for continued defenses.

My grandmother’s warnings were the echoes of a cultural jig from a preceding era of scarcity, where having control over how much you eat is a crucial habit. It also made sure that you didn’t ruin your appetite and waste what was on your plate at dinner. Most of us live in a time of artificial abundance, and fears of spoiling our suppers seem to make little sense. There are calories to be had in great quantities. (Just don’t examine how nourishing they really are.) One could even argue that this cultural jig we’ve lost is even more important in protecting us, in this case from the utterly delectable and ultimately destructive concoctions the industrial food labs cook up. Not spoiling your supper becomes all the more important.

As the philosopher Byung-Chul Han explains, “rituals are symbolic acts. They represent, and pass on, the values and orders on which a community is based.”[2] Resisting immediate gratification for future rewards translates into other areas of life. Learning this skill of restraint through rituals, like waiting until everyone is gathered and a blessing is said, provides baseline habits that make it easier to say no to other temptations, like doomscrolling on social media or buying that new 60-inch LED TV.

We can even take a materialist approach to the benefits of not spoiling your supper. Take, for example, the power of saliva. The American Dental Association explains that saliva is a first-rate protector of oral health, helping “build and maintain the health of soft and hard tissues.” Saliva helps break down food, protects teeth and gums, “provides disease-fighting substances throughout your mouth to prevent cavities and other infection,” and keeps “high levels of calcium, fluoride, and phosphate ions at the tooth surface.” When you don’t snack and spoil your supper but instead let the smells and sights of delicious food wash over you, what happens? You salivate. If you’re disciplined and wait until the blessing, that saliva helps protect your pearly whites.

It’s not just your oral health that you’re sustaining, but other physiological processes as well. By resisting the urge to spoil your supper—especially if your snack would have included sugar, simple carbohydrates, or trans fats—you lower your overall inflammatory state. Inflammation is linked to myriad diseases, including Alzheimer’s, cardiovascular disease, cancer, and arthritis. The less you snack, the more you’re protecting yourself. My grandmother’s wisdom provides tangible health benefits, even if she couldn’t explain them to me.

These justifications may sound a bit utilitarian, but they speak to the far-reaching ramifications of apparently trivial rituals. In G.K. Chesterton’s well-known metaphor, he warns reformers about blindly tearing down a fence before finding out why it was placed there in the first place. Chesterton points out that the fence-wreckers think they’re achieving liberation but they usually end up practicing a conformity to new (and faddish) conventions.

It’s not hard for me to see my adolescent self in this metaphor. I was sure I didn’t need my grandma’s silly rules. They were arbitrary and pointless. With foolhardy self-confidence and crumbs on my face, I barreled through Chesterton’s fence again and again, not realizing that far from being liberated, I was becoming imprisoned, both by dependence on comfort by gorging on cheap calories and by the narcissism of a hyper-individualistic society that says get yours and get it now. By taking food before others, I acted out the belief that I was more important than my loved ones, especially those working so hard in the kitchen to make the meal possible in the first place.

All this points to what I consider the greatest value embedded in my grandmother’s rules; these rules placed me within the family. The rules said that I was not the center of the universe, a message reinforced by waiting for the blessing in order to express gratitude to God. I thought I was charting a path to a new enlightened future, one that broke with the backward views of the past. I could not have been more wrong. Once I chafed at these rituals, but now I see their deeper meaning. When I hear some folk wisdom that I would have previously dismissed as backwards or ridiculous, I now look for the guardrails it establishes and what they might be protecting.

The Axial Age and the Sacred Community

In Praise of Mediocrity