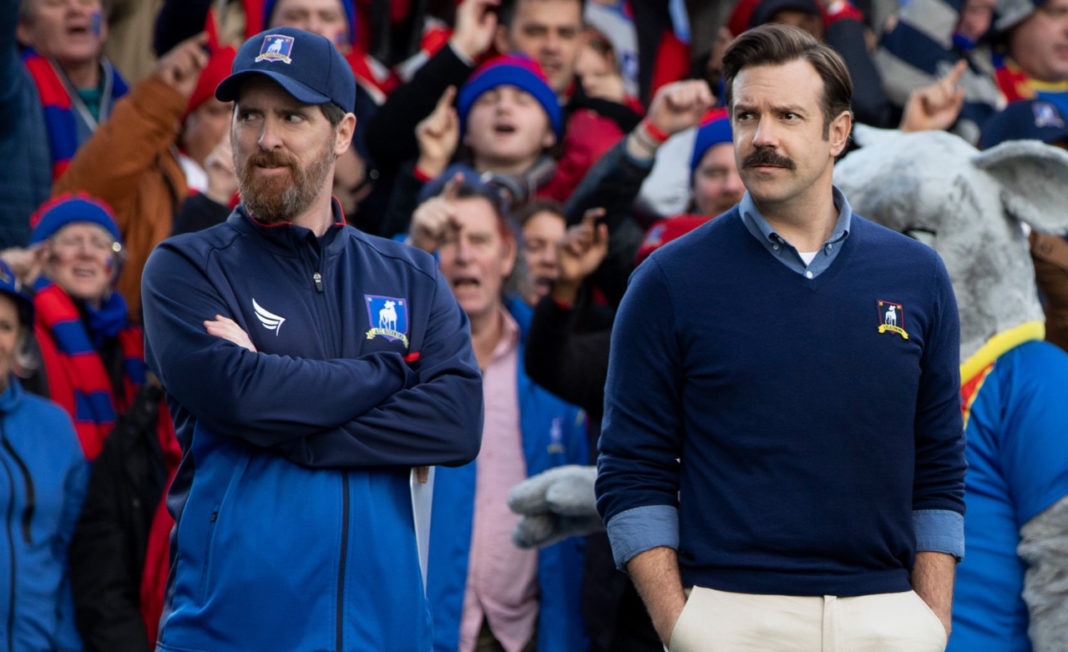 Black Mountain, NC. One of the challenges that confronts any fictional story is how to compellingly display the good. Few accomplish the task. Darkness and evil tend to make more exciting narratives. Think about rooting for Walter White in Breaking Bad or the gripping narratives of Billions or Succession. Evil is bad, sure, but it is interesting.

Ted Lasso, a recent show from Apple TV+, attempts to do the hard thing: highlight goodness. As the story goes, Ted Lasso, played by comedian Jason Sudekis, is a college football coach in Kansas brought in to coach AFC Richmond, a professional (English) football team. Rebecca, the new owner, is in the midst of a scandalous divorce with the former owner, Rupert. Turns out Rupert is infamously adulterous, and Rebecca was the last one to find out. Rebecca takes ownership of the team as part of their divorce settlement, and she’s out to destroy the one thing her ex-husband ever loved: AFC Richmond. She brings in Ted Lasso with the specific purpose to fail. But Ted pursues his doomed task with love and joy.

The show is a spinoff of an advertisement for the English Premier League in 2013-2014. I found those commercials funny way back when, but could a commercial from 7 years ago hold up the premise of an entire television series? I was skeptical to say the least.

And I was surprised: I think it did. Sure, there were some repeated jokes and clichéd moments, but overall, the show displayed the complexity of human beings, contemporary culture’s penchant for skepticism and critique, and the struggle to believe in goodness.

As I reflected on this show, an unrelated twitter war raged—par for the course, you may say. This time it was about agrarian models of ministry leadership. One of the figures critiqued (or at least questioned) was the patron saint of the Front Porch Republic, Wendell Berry. In essence, the argument was why is an agrarian model of ministry the or at least a prevailing model of ministry leadership? Does it sideline urban or third world or Pentecostal pastors? Are other metaphors needed for a more holistic vison of ministry? I don’t necessarily “buy” the line of questioning for reasons that are unimportant here, but with this TV show on my mind, I was struck by the ways in which Ted Lasso offers a compelling model of a good parish priest: this fictional football coach exemplifies how to lead others with care.

What follows are a few ways we can look to Ted Lasso as a sort of model for ministry.

From the time Ted Lasso arrives in England, he’s consistently called a “wanker.” It doesn’t bother him much. He can be laughed it. He’s easygoing in most things. Trent Crimm, the intimidating reporter from The Independent, follows Ted for a day to write an exposé on him. Trent goes with Ted to a local elementary school where the kids make fun of him. At dinner later on, in an effort to be a good guest, Ted orders his Indian food as spicy as Indians would like it. (Something he soon regrets but continues to eat so as not to offend). At the end of their time, as much as Trent Crimm tries, he cannot dislike Ted. Even if he is an idiot, he’s a likable idiot, because he doesn’t mind being unimpressive.

But being unimpressive doesn’t mean he’s indifferent about everything. His passion is this: his team and his players. He cares about people. He cares about leading well. You better not diminish other people on his watch even if you diminish him. When Jamie, the young superstar, says he can’t practice because he’s hurt, Lasso rips into him, channeling Allen Iverson’s infamous “practice” interview. To put self before team is the worst evil in Ted’s imagination.

Herein lies the vital paradox that Ted Lasso embodies: A refusal to take himself seriously but a commitment to taking his task seriously.

In short, Lasso has no idea what he’s doing. He knows nothing about soccer—self-admittedly, “You could fill two internets in what I don’t know about soccer.” But, he clarifies, “AFC Richmond is gonna go out there and give you everything they’ve got for four quarters.” “Two halves,” someone corrects. Along the way, he learns a lot—that games can end in a tie, that shooting it over the goal isn’t three points, that tackle means something rather different in English football, etc.

Although he doesn’t know soccer, he does know people. He’s attentive to what makes people tick. At one point, he buys every player in the locker-room a book that would benefit them (a love language I speak). He gives Roy, the aging team captain, A Wrinkle in Time. Roy is cast as a man’s man, someone past his prime, and with little room for fun, laughs, or a good time. He’s a competitor. But he ends up reading the book chosen by Ted to his niece (his soft spot) at bedtime, and as he finishes, he lets out an expletive (a common occurrence for him). He realizes the young girl’s struggle with the burden of leadership is actually his struggle. “Am I supposed to be the little girl?” Roy asks. “I’d like you to be,” Ted replies.

Earlier, he notices a young African player may miss home around his birthday—as Ted misses home and is adjusting to a new place. As a result, he gets the whole team to pitch in to buy him a present to bring a little home to him.

He may not know the intricacies of soccer (or even the basics), but he does know the one main thing: caring for people. He seeks to inspire and bring out the best in his players. He’s a classic player’s coach: as long as you play for him, he will seek the best for you. Because here’s a secret of leading and loving people: people “perform” well if they are well-cared for—if they are heard and seen and listened to.

Coach Lasso is indefatigable. He won’t be worn out by loses or poor performances or critics. In fact, he says he doesn’t care about wins and losses (which enrages my competitive nature). As a summary of the “Ted Lasso Way,” when he asked whether he believes in ghosts, he replies, “I do, but more importantly, I think they need to believe in themselves.” He’s not just relentlessly positive, as if he wills his positivity from some deep abyss. And it’s not just about “believing in yourself,” but what Ted exemplifies is being a person who sees the best in others. He sees with eyes wide open, but his eyes have been trained to see goodness. In sum, he enacts charity, and this charity makes him patient and steadfast.

It’s evident early on that Rebecca, the team’s new owner, has no respect for Ted. But Ted shows up every morning with homemade cookies and a chat, something he refers to as “Biscuits with the Boss.” Even when Rebecca consistently says that she doesn’t have time, Ted knows how important time with people is. It doesn’t matter how much this overt optimism bothers Rebecca: Ted is going to show up. And Rebecca grows to cherish their time (even if the cookies were the thing she looked forward to).

In the same way, there is a consistency and faithfulness to good pastors. They’re going to show up even when they fail—even for people who may not like them.

An Eye to the Lowly

One of the first moves Coach Lasso makes is to ask the equipment manager, Nathan, for his advice on the team. Prior to Lasso, Nate was a shy, reserved, nervous background guy. He was the butt of everyone’s jokes—a sort of forgotten person unless they needed a good laugh. But Lasso attends to and lifts up even the lowest, and with the dignity newly-bestowed on him, Nathan earns the respect of the players. In Lasso’s parish, there is no status. There is no higher or lower. The equipment manager can have a voice and contribute if he takes time to pay attention.

While Ted Lasso walks to and from the stadium, he quickly became a member of the community. It doesn’t matter if it’s a reporter or a girl on the street; he seeks to be a member. He’ll stop to play or talk. He’s unrushed. Even with those who benefit Ted very little, he knows he can benefit others by the way he treats them.

Towards the end of the season, Ted and Rebecca are sitting at the local pub together with the rest of the soccer community. Rupert, Rebecca’s ex-husband, surprisingly comes in and promises to come to each remaining game and criticize Rebecca’s leadership of the organization. Ted steps in to challenge him to a game of darts: if Rupert wins, he can set the starting lineup; if Ted wins, Rupert cannot come to the remaining games. Ted, it turns out, is a master marksman. He wins and defends Rebecca—the same woman still trying to sabotage him.

It’s in these ways that Lasso models a pastor who stands up for the weak and exploited, or just the overlooked and trivial. He shepherds his sheep and defends against predators. In a pastor’s world, no one is insignificant.

For the discerning reader, you’ll notice these are mostly agrarian virtues, ones that are also upheld in Wendell Berry’s fiction. The agrarian mind seeks to flourish where it is planted, denies specialization in order to care for the whole, desires to holistically care, and knows there are no little people or little places. These are simply attributes of faithful ministry. So maybe the agrarian imagination is not the only model of ministry leadership, but it is a good one.

Ted is an imperfect man: he gets drunk, he lashes out at Nate the Great, he makes mistakes. But a central reason his character is compelling lies in his willingness to apologize and to forgive. When Rebecca finally comes clean about all the ways she has tried to intentionally hurt Ted, he simply replies, “I forgive you.” Shocked, Rebecca asks, “Why?” “Divorce is hard… It makes folks do crazy things.” The scene ends with Ted saying, “You know, I think if you care about someone, and you got a little love in your heart, there ain’t nothing you can’t get through together.”

The sentiment may be rather sentimental but as parents or coaches or teachers or priests, isn’t that what we desire? To care or to be cared for in such a way that we can get through the worst of times intact? And if 2020 has shown anything, it’s shown the vacuum of sustaining relationship, the lack of empathetic care, and the need for something that can get us through. In Coach Lasso, we see a model of relentless hope and love in the midst of chaos.

Oh When the Saints (Come Marching In)