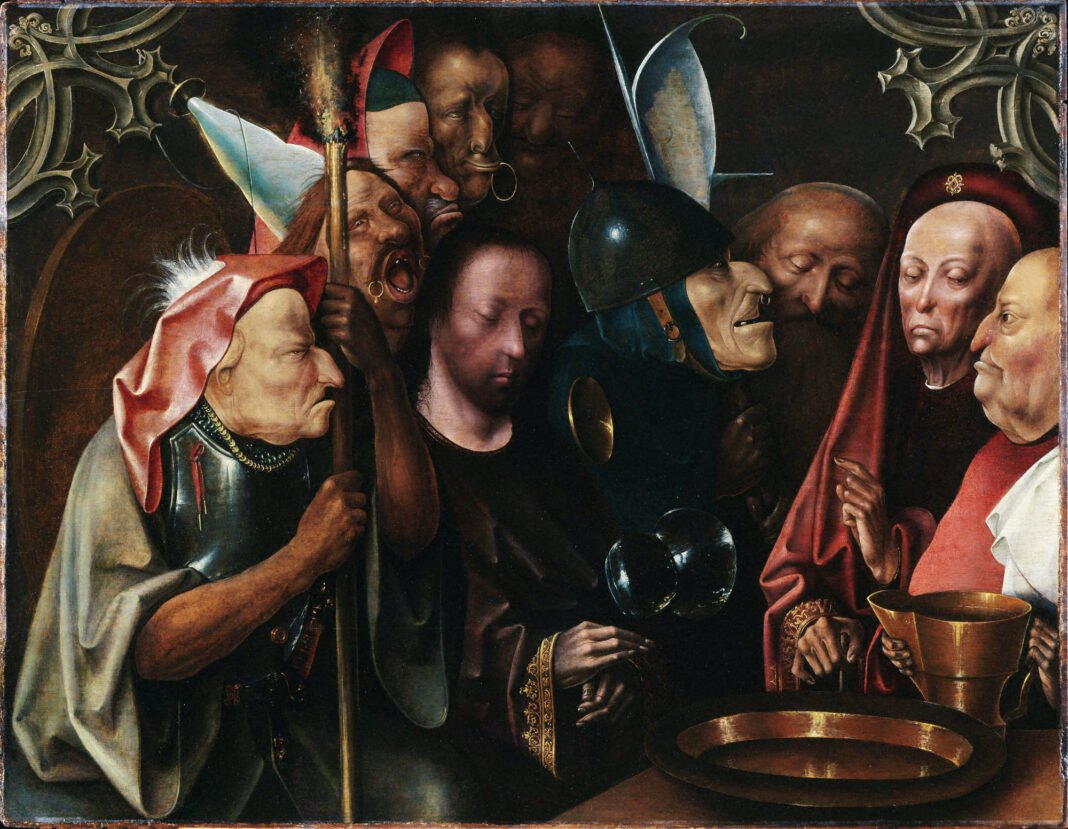 Martin, TN. I was in the middle of Rod Dreher’s book, Live Not by Lies (2020), when I looked up and saw the U.S. Capitol being overrun by horned agitators, QAnon conspiracists, MAGA Civil War-ists, white supremacists, and Camp Auschwitz sympathizers. What I saw on January 6, 2021, caused me to pause and read the book from a slightly different perspective. Although Dreher addresses the dangers associated with the Woke Left, events surrounding the election made me wonder about the dangers associated with the Fringe Right.

Dreher’s overriding theme in Live Not by Lies is that a spineless Christianity is not prepared to suffer for the truth; rather, it will relent when threatened to conform to the culture, especially if failure to conform means social ostracization or personal economic loss. Dreher calls his readers to be prepared to stand up for the truth no matter the cost.

For example, he recalls how the great Russian dissident, Aleksandr Solzhenitsyn, insisted that the man who refuses to live by lies will not “say, write, or distribute anything that distorts the truth” and “will not vote for a candidate or proposal he considers to be ‘dubious or unworthy.’”

Live Not by Lies is reminiscent of Ryszard Legutko’s The Demon in Democracy: Totalitarian Temptations in Free Societies (2016). Legutko, who grew up in Soviet-occupied Poland, became concerned when he recognized behaviors associated with communism were becoming prevalent in Western democracies. Legutko argues that the West’s persistence in throwing off its Christian heritage, its never-ending quest for radical egalitarianism, and its efforts at silencing dissent from traditionalists suggest a rising authoritarianism.

Dreher also notes these trends, but he places more emphasis on Woke Capitalism and surveillance technologies. While Legutko proposes classical republicanism as the best defense against totalitarian temptations, Dreher seems to be saying a form of soft totalitarianism is now all but inevitable. Therefore, Christians had better brace themselves. Essentially, Dreher reasserts his Benedict Option thesis as a way to prepare ourselves for the coming storm.

The Origins of Totalitarianism

While both Dreher and Legutko underscore the radicalization of the Left in a Wokeward direction, neither author really carves out space regarding the radicalization of the Right, whether in Europe or America. In all fairness to Dreher, five days after the insurrection he posted this comment in his The American Conservative blog: “It is clear to me now that the United States is in much deeper trouble than I realized even a week ago. . . the depth of the ideological capture of the Right by a parallel insanity is becoming clearer to me.”

In the same post Dreher quotes from Live Not by Lies explaining the difference between “simple authoritarianism” (a dictatorship that monopolizes state power) and a totalitarianism where “an ideology seeks to displace all prior traditions and institutions under the control of an ideology.” The point Dreher seems to be making is that while Trump’s authoritarian tendencies should be loathed, the real danger for America lies in Woke-infused soft totalitarianism that has wrapped its tentacles around academia as well as the corporate world.

Crucial to Dreher’s thesis is Hannah Arendt’s The Origins of Totalitarianism (1951), which analyzes the rise of both Nazism and Stalinism. Arendt shows her readers how these two ideologies had more similarities than differences in the way they gained and maintained power. Arendt’s examination of how authoritarian regimes rise to power is highly pertinent to our own times.

Of course, Nazism was an ideology in its own right. The Party’s mythos included vengeance against all perceived enemies, a pure Teutonic race, and an ethos imagined in Wagner’s “Twilight of the Gods.” In the 1930s, Germany’s pagan past rose out of the chaotic mist—barbaric, self-determined, and violent—and took the land of Luther to the edge of the abyss. A super-race needed a Nietzschean Superman to realize its dream-vision; therefore, Hitler made himself a cult figure and grew his party through brute intimidation (the stick) and a sophisticated propaganda machine (the carrot).

We should not forget that the little corporal rose to power through the democratic process, receiving 37 percent of the vote in the German presidential election of 1932 (based on the strength of his support, he was then appointed Chancellor in 1933 by President Paul von Hindenburg). The Führer cult was best captured in the refrain of Rudolf Hess, who uttered at the start of each rally: “The Party is Hitler! Hitler is Germany, just as Germany is Hitler!” Once Chancellor, Hitler totalized his authority by seizing all the vestures of the state.

A professor once told me in graduate school that Hitler inoculated us against all other Hitlers. I did not believe this conventional wisdom then, and I do not believe it now. Francis Schaeffer warned us forty years ago in The Great Evangelical Disaster that once our biblical consensus and Christian ethos is removed, once all morality becomes relative, once law becomes arbitrary, society moves toward disintegration and a prevailing authoritarianism fills the vacuum. “At this point the words ‘right’ and ‘left’ will make little difference,” Schaeffer said. “They are only two roads to the same end.”

When one recalls Arendt’s observation that isolation and loneliness tend to breed authoritarianism, Schaeffer’s warning becomes even more acute. Add to this mix how social media and the COVID pandemic exacerbates human atomization and it is not hard to imagine how a dangerous soup might be cooking.

Gene Edward Veith, Jr., and I have both written how Germany’s bout with fascism can be viewed as a postmodern phenomenon with the prime tenets of irrationality and spectacle undergirding it. Nazism’s irrationality was to be found in its anti-intellectualism, its book burning, and its enshrinement of the Nazi Party as the sole arbitrator of truth. Nazism’s spirit of spectacle was to be found in its visual propaganda, its pathological rallies, and its theatrical leader who was able to work up audiences into a frenzy by ranting endlessly against the injustices of Versailles, the disease of the Jews, and the flaws of democracy.

In many regards, Trump is a postmodern political figure who embodies these elements of irrationality and spectacle. The fact that Trump was a TV reality show host before being elected to office is just part of the problem. His lawlessness and his aversion to the truth round out a tragic episode for constitutional democracy.

Although the Senate acquitted Trump in what is now his second impeachment trial, nothing will erase from memory the images of him standing over a mob with a clinched fist shouting, “Stop the steal.”

By all accounts the election was not stolen. Trump told a BIG FAT LIE. Again.

Former presidential speechwriter Peter Wehner, who served under three Republican presidents, told PBS Newshour anchor Judy Woodruff that Trump “lies morning, noon, and night . . . What you have got is a man in the White House who is engaged in not just an assault on truth, but an effort to annihilate truth.” Trump’s lying began with the crowd size of the 2017 inaugural and ended with his denial of the 2020 election results. In between these two events, it was, indeed, literally, morning, noon, and night—without ceasing.

And precisely here we should hold out Solzhenitsyn’s standard for truth-telling, as Dreher would call us to do. We should not live by lies and we should not celebrate people or ideologies that do—neither from the Left or Right.

The Republican Party is now embroiled in a battle for its soul. Does the GOP really want for its poster child someone who wrote in a Facebook post that Jewish laser beams from outer space started forest fires in California and that the attack on the Twin Towers was a hoax? It is hard to imagine the Republican Party moving toward this kind of irrationality and spectacle, but it was also hard to imagine the sacking of the Senate chamber until it actually happened.

As to the possibility that an American brand of fascism could make itself known on these shores, Dreher is probably correct in saying there is a stronger danger from the Left than from the Right. However, if a significant number of Christians—a large segment of Trump’s old constituency—throw off their love for the Truth (what Schaeffer called “true truth”), embracing, as a good number of them seem to have done, a cult of personality or silly conspiracy stories that spin out from the social media echo chamber, then we must contemplate the prospect of authoritarianism on two fronts.

And who wins in a contest between Woke Soft Totalitarians and Fringe Right Conspiracists? Nobody. But there will be many losers, not least among them Christians who fail to stand for the truth.

Dreher proposed the best way forward for the Republican Party when he wrote Crunchy Cons. In case anyone has forgotten the manifesto, here it is again in brief:

These are Front Porch Republic values and merit a fresh set of eyes from the GOP. Lies, melees, and laser beams will get the Party nowhere.