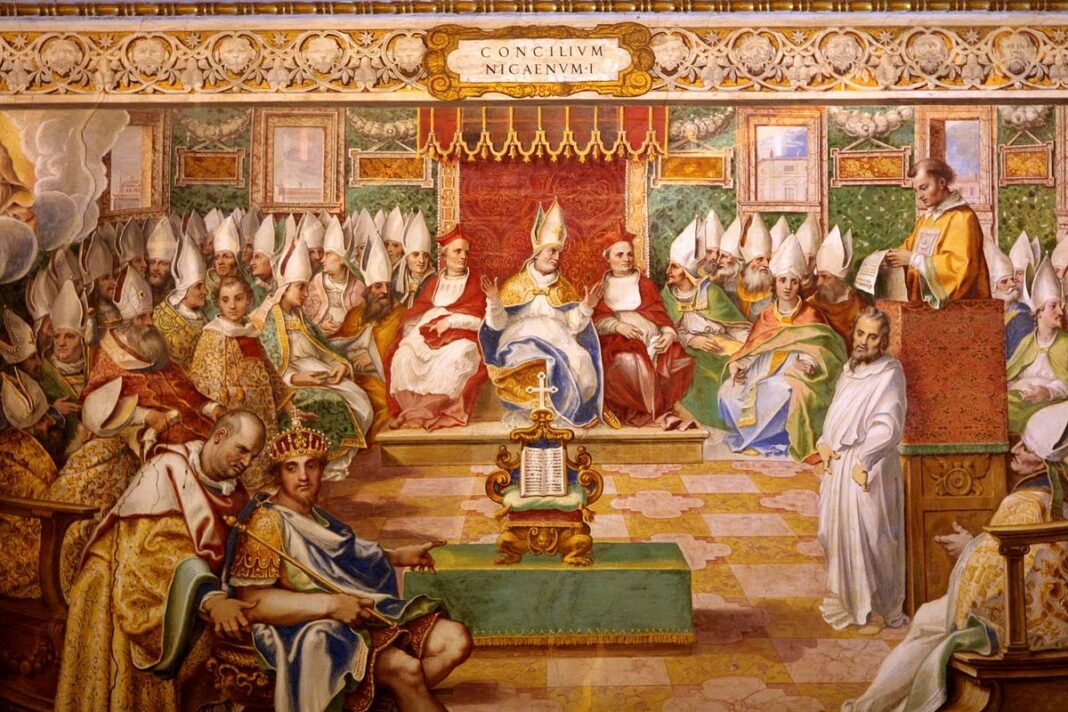 Harrison County, OH. Theology: Mythos or Logos?: A Dialogue on Faith, Reason, and History is an exchange of fifteen letters between Distributist Review editors John Médaille (who doubles as a Texan businessman/theology instructor) and Thomas Storck (who doubles as an Ohioan librarian/philosophy instructor). This correspondence was cued by a 2018 Médaille article about Plato’s Euthyphro that appeared in the Front Porch Republic. In that article, Médaille surmised that Euthyphro was about the “conflict” between reason, as personified by Socrates who searches for the essence of the Good, True, and Beautiful apart from their expression in the world of things, and faith, as personified by Euthyphro who claims to be guided by “wisdom” received from the gods, courtesy of Homer and Hesiod. In Plato’s telling, needless to say, Socrates wins the argument by demonstrating, once again, how little most of us know about anything, but rather than rest in that particular truism Médaille finds himself prompted (in his article) to think about the extent to which the argument was unfair. Given that Euthyphro did have “an integral view of the cosmos,” shouldn’t Plato have allowed him to ask Socrates whether “analysis” is the “proper way” to know persons? Hmm. “Speaking as a theologian,” Médaille concludes, “I find it necessary to defend the art of our guild, even by one so witless as Euthyphro.” Boom! After that remark, the Storck/Medaille exchange is off and running, with Storck stepping into the ring to defend Socrates and by extension Aristotelian logic, at the same time that Médaille plants both feet on the supposition that faith not only precedes but is to some extent a condition of reason.

The book sounds better than it actually is, owing to the fact that Médaille is loose with terms—so much so that he frequently, if unwittingly, guides readers into blind alleys (“liberté” is an “ancient Christian ideal”) or, worse, onto alleged entry ramps (“Whig Thomism,” “Radical Orthodoxy”) that are in fact exit ramps used primarily by readers going in a different direction. At one, almost perfectly dizzying point in the eleventh letter, Médaille even channels Occam (“If I am a horsebreeder, do I give a whit about the essence of a horse?”) in order to then trace modernity and its associated ills to natural theology and Thomas Aquinas. Storck, by contrast, patiently and rightly (if somewhat humorlessly given the circumstances) corrects Médaille’s roughly postmodern claims by either (a) accenting the careful attention awarded to the historical record in accounts of the Resurrection in the New Testament, (b) defending the traditional definition of truth as that which is there whether or not we want it to be there, or (c) tracing modernity to the appearance of nominalism in the early 14th century. Therefore Storck winds up winning an argument that should in truth (pun intended) have been won by both. Given that neutrality, the zone convincingly portrayed by Storck as an ideal place in which to argue and think is flawed only if it is disingenuously interpreted (by, say, architects of liberalism) as an ontological premise so as to cover up and disguise hostility toward a different (for example, Christian) ontological premise, Médaille could have successfully argued, with other critics of the Enlightenment and without contradicting Storck, that because bias-free reason is a fiction, the real question is which bias (or foundational story) best nourishes rational discourse. But, Médaille doesn’t take that route.

Let us cut Médaille some slack, though, for cheer and good will do matter every bit as much as diligence does, and Médaille has a con-man’s gift for gab. He even dresses the part, what with his trademark black suit, e-cigar (this being 2020), and showbiz grin. If Mark Twain and Tom Wolfe could do it, John Médaille can too. Therefore it would be prudent to calculate not just one but two estimates of this book’s worth. How, then, does Mythos or Logos read with Médaille’s storytelling prowess more fully in view?

Pretty well, it turns out, for Médaille does touch on enough key bases to showcase the various issues that are at stake in this exchange, if not always the exact logic that a more careful postmodernist might use to persuasively state his or her case. I have already mentioned Médaille’s alertness to the many ways in which faith enables reason, rather than the other way around. Here I should add that he also effectively counters (a) Storck’s dismissal of “myths” as legends or mere fables, (b) Stork’s tendency to exalt attention to “facts” as a crucially important marker for responsible thinking, and, more dramatically, (c) Storck’s belief that the biggest truths are demonstrable and can be proven. Myths aren’t lies, Médaille says at one point to Storck. Rather, they are stories that convey truths that cannot be communicated in any other way, and important stories—e.g. ones that predicate, say, God’s entrance into history—cannot be “proven” any more than a declaration of love can be proven. As for “facts”— those are plentiful and mean nothing, says Médaille. What counts is how we package them so as to create worlds that we choose to live in or at least continue to live in. The bottom line is that readers of Mythos or Logos do wind up touring postmodern emphases in addition to still-active modes of resistance to such emphases, at least insofar as those modes come into view in Storck’s letters.

And there is also another, not insubstantial benefit afforded by this book, which is that it turns out to compel attention for almost exactly the same reasons Philippe Rosemann (National University of Ireland, Maynooth) says it does, in his foreword. Rosemann argues that the Storck/Médaille exchange illuminates the current (post-2016) divide between pro-Trump, hostile-to-political-correctness nationalists on the one side, and anti-Trump, virtue-signaling global elites on the other, owing to the fact that Storck and Medaille cannot seem to find common ground any better than current-day Democrats and Republicans can.

When I first caught the gist of Rosemann’s argument I thought—no way! After all, both Storck and Médaille are committed Catholics who have each of them staked their lives and livelihoods on the Christian claim that God exists, Jesus rose from the dead, and Truth, Goodness, and Beauty are real. Does that not suffice as common ground? And—even if for one reason or another you think it doesn’t—are they not talking? By the time I finished the book, though, I decided that Rosemann was right, and for the simple reason that Storck and Médaille consistently show themselves to be every bit as entrapped by absolutized contraries as Trumpian nationalists and their woke progressive foils tend to be. Admittedly, Storck and Médaille do (each of them) come close to breaking free, and here I think especially of Médaille’s discourse (in his sixth letter) on the eschatological dimension to God’s entrance into history, as well as Storck’s career-long alertness to false dichotomies, let alone the attention he devotes here (in his third letter) to ways in which theories “guide and restrict” fact selection. In the end, though, they remain entrapped by either a Catholic version of the Enlightenment (Storck), or what Alasdair MacIntyre would call “genealogical” or Nietzschean thinking (Médaille). It is as if they are stuck in the 19th century and completely without access to the 20th century Catholic resolution to epistemological crises that derive from the failure of Kantian and neo-Scholastic/natural theology Enlightenments.

Contrary to popular belief, Vatican II was not just an occasion for the appearance of current-day progressivism and a traditionalist, Lefebvre-inflected reaction. Rather, its chief and more lasting significance was the hard-won insertion of explicitly incarnational, non-extrinsic logic into a concluding, anthropologically-oriented chapter about the dignity of the human person in Gaudium et Spes, Vatican II’s fourth and longest pastoral constitution on The Church in the Modern World. The appearance of that logic, as codified in a phrase that depicts “the incarnate Word” as the answer to most modern puzzles, allowed JPII and Benedict XVI and then the Church at large to finally turn the corner in its effort to meet the challenge otherwise known as modernity, in that it provided theologians the doctrinal tools they needed (and still need) to affirm Thomistic logic while at the same time substantively and conclusively addressing the sorts of epistemological crises that derived from the substitution of modern mindsets for medieval ones—crises that, up until 1964, had fueled only nihilistic energies, on the one hand, and largely defensive Catholic reactions, on the other. In other words, the insertion of that Christological logic into Vatican II’s primary position paper has far-reaching implications. Indeed, given the severity of the predicaments it solved, its only real comparable is the similarly hard-won insertion of explicitly incarnational logic into the Nicene Creed. Yet, as I’ve said, Storck and Médaille write as though this particular advance didn’t happen. Instead of seeing faith and reason as equally crucial aspects of belief in God or, more to the point, equally crucial ways of participating in God’s clear presence both in this world and the next, they write as if their only choice as Christians who cannot accept Nietzsche’s conclusions regarding the failure of the Kantian Enlightenment is to either (a) side with Kierkegaard (as Médaille does) and make a “leap of faith” that, from a strictly reasoned point of view, can only be judged “absurd,” or (b) side with Pius IX and Leo XIII (as Storck does) and adopt a defensive posture whereby something very close to “pure reason” continues to be exalted through the cultivation of allegedly Thomistic neo-Scholastic viewpoints that yield “proofs” of heresy, let alone God’s existence.

How can this be?

I think it’s because all of us have to some important degree lost the ability to recognize Jesus as a word—namely, as a person whose corporeal acts are, in effect, letters (material consonants and vowels) that are spoken by God and thereby invested with ultimate sense. We are, in this respect, culturally benighted. Perhaps this newfound handicap is the result of atrophy caused by sustained attention to increasingly visual news sites. Perhaps it is the result of internet connectivity that has sped us up and created impatience with removes. Heck, the disability might even be what is demanded of us now that the promissory note we signed back in the early 1300s (when we traded in the apprehension of being for access to power) is coming due. Whatever the reason, every single last one of us appears to have lost a key, common-sensical referent that absolutely must be in place if we are to understand, much less appreciate, the enormity of the victory that was achieved in Nicaea (modern day Turkey) when Athanasius and the various bishops attending from Greece, Syria, Alexandria, Jerusalem, and Rome promulgated their claim that “true God from true God” was “incarnate” and “became man.” Angels kneel before this mystery, but we, apparently, can’t even notice it. Which means: it’s time to walk out of our artificially-lit caves and get as close as we possibly can to real presence and real powerlessness, wherever and however these things come into view. That way, we’ll be trained to at least recognize markers for the Incarnation, and perhaps, eventually, to recognize what such an event might mean or the extent to which it matters.

The Economics of Distributism IV: Property and the Just Wage