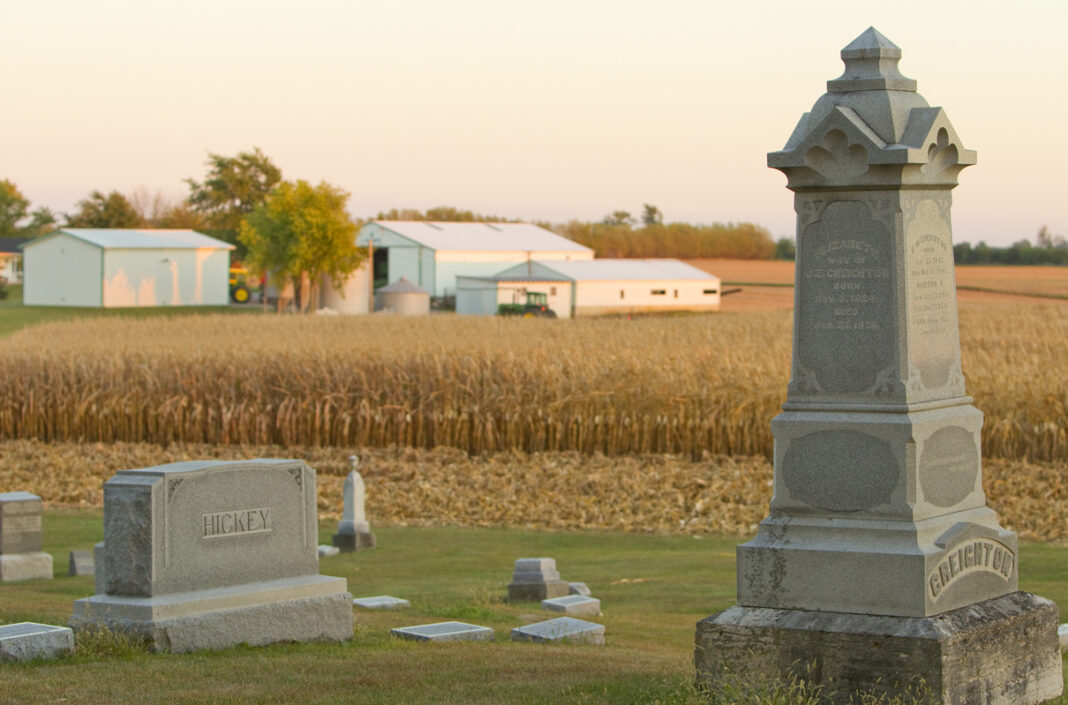 Bedford, VA. Holly called the church to tell me that her daddy was dying, and the siblings were gathering at the house. Would I come and pray for him and the family? Of course. Hew was the 93-year-old patriarch of the Tabor family, a beloved church elder, and a community treasure. I was still two weeks from getting my second Moderna vaccine. Maybe it wasn’t the most professionally correct thing to do, but I knew it was the right thing to do.

When I got to the beautiful, old, sprawling farmhouse, Holly welcomed me at the door. Her brother, Phil, was there from Natural Bridge and the younger brother, Tommy, lived in Lexington. Holly had built a house on the family property when she retired as a social worker in Harrisonburg. “Thank you so much for coming. I know Daddy will be grateful that you’re here.”

Hewitt Tabor was the last of seven generations of farmers living at the homeplace. His family went back to the original founding of Bethany Presbyterian Church in 1746. He raised and sold cattle his entire life and just stopped working the farm two years ago when his weakening heart made it impossible for him to even walk down to the barns. For years Hewitt farmed. And all the while, he and Sylvia provided neighborly support to family, friends, church folk, and others. He was a beloved neighbor, known to be a gentleman. He loved baseball and for decades he and Sylvia hosted college players who stayed with them for the local July league. He and Holly have kept in touch with a couple handfuls of the players. Two even made it to the big leagues. I knew that Hewitt had already worked it out with two neighboring farmers that they would acquire the farm acreage, leaving Holly with her home and additional financial resources. The neighbors were already tending the acreage and keeping it as lovely as Hewitt had. Hewitt’s rural community bears his family name—Tabor.

“The peace of Christ be with you, Hew,” I say as I hold his hand and sit next to him on the bed that has been in the family room for the past year. I read Psalm 121, “I lift my eyes to the hills,” and Psalm 23, “even though I walk through the valley of the shadow of death I fear no evil. For Thou art with me.” Then I offer a prayer on behalf of Hew and his family. Hew nods his head slightly; and, although not speaking at this point, he is aware of the presence of his children and pastor. The grandkids are all on the way and will be there by supper time at the latest. Hew goes back to sleep. Then we sit around the bed and visit for about an hour. His children are sad but also grateful because it is fitting and right that Hew is at home, peaceful and surrounded by his loved ones. He had lived a full and meaningful life and was soon on his way to be reunited with Sylvia. Holly called me the next afternoon to tell me that Hew had passed. We scheduled a time for the family graveside service.

Later that day I was making the long drive home from where I serve as an interim pastor at Hew’s church and was reflecting on the beauty of this family, farm, and rural community. The beauty, fittingness, and purposefulness all cohere in a profound way that I will not try to define. But few people in our digital, metropolitan, commercial world have any opportunity to experience a world formed through eight generations of interpersonal relationships in one place.

As I drove, a memory from the summer replayed itself in my mind. In July I attended a digital conference for Presbyterian (USA) presbytery moderators. I was elected moderator of the Presbytery of the Peaks, an association of about 120 churches in central and southwest Virginia. Normally, I would have gone to Louisville, Kentucky (our denominational headquarters) for the conference. But I would be serving as a pandemic moderator. This seems a bit of divine humor considering my lack of technical skills and my failure to care much about rectifying my digital deficiency. Before virtually attending the moderator conference, I was required to take an Intercultural Development Inventory. I learned that the group who developed this tool was an innovator in intercultural competence and “enhancing the human condition.” I was certainly game for taking the inventory because it was clear to me watching the news during the pandemic that intercultural competence was running pretty low.

After we took this inventory, a twenty-something-year-old described our results. This young person was not a professional inventoriest (if that is a word) nor a person from the company who developed the inventory. Rather she was some sort of administrator further up the food chain of our denomination. She relayed to us that we had measured fairly average on the inventory’s scale of human development. We had work to do. In order to progress in our human development, we needed to grow from seeing people in just an interpersonal way and rather understand human beings as parts of larger systems. Now, I am not opposed to understanding how larger cultural systems work, especially as it relates to ongoing racism in American culture. But rather than being a measure of one very specific value, this inventory became an overarching and overreaching burden on the conference. The implication was clear that pastors immersed in the limited scope of personal relationships in a small rural community were not as humanly developed as those concerned with the abstract concerns of larger cultural systems.

So, it was no surprise to me what happened next. We were sent to small breakout groups on our computer screens to talk about what kind of progress we were making in our intercultural competence. It only took six minutes (I timed it!) for someone to rail against the lack of intercultural competence in the rural churches in her presbytery. The rural complaint continued as lament around the rectangles of pictures on our screens until it finally got to me. There was no way out—I had to confess that, yes, I was a rural pastor immersed in the lowly work of interpersonal ministry. That is, I was pastoring a church where the mission is accomplished through individual face-to-face interaction with human beings in a very particular, very small community in rural Virginia—namely Tabor. There was an awkward silence. In order to fill it another young pastor inquired, “Well, yes, but are you able to do anything on a systems level?”

How do you measure the beauty, fittingness, and purposefulness of Hewitt, his family, farm, and community? I hope no one tries to innovate an inventory to do it. But if you try to tell me that Hewitt was any less developed as a human being because neither he nor I focused our attention on a systems level, then perhaps it would be better if you held your tongue. And I wish that you could have known my friend Hew.