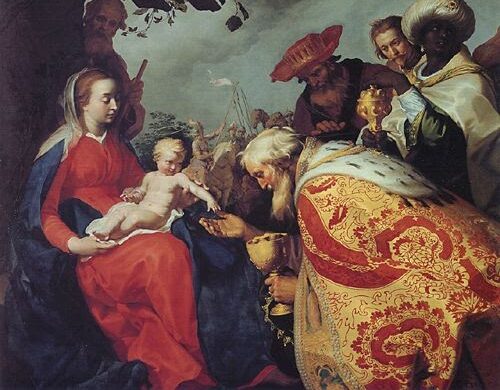 Worden, IL. I think it started with King Cake. My reverend husband wanted to have an Epiphany service on January 6, rather than transferring it to the nearest Sunday. Epiphany wasn’t a holiday people were into observing, and Thursday wasn’t an evening people went to church. Hype was needed. Would you please make a King Cake? he asked.

I had never heard of King Cake, but I was new to the area, and home full time with a baby and a toddler. Maybe King Cake would be my friend. In getting to know each other, I learned that King Cake was not a cake, but is more like an iced hubcap from an ogre bakery. One of the babies got sick so I couldn’t go to the Epiphany service and party. But other people went, and reported liking both. We’ve been eating King Cake after church on January 6th ever since.

Next, I think, was St. Lucy buns. It came to light that they were to be eaten on December 13. Becoming people who needed saffron made our family feel more interesting. The Santa Lucia observances were somewhat familiar to me by way of the American Girls books and my own family’s Swedish extraction. My Lussekatter looked like debauched slugs, but they tasted good, like no other day of the year.

Such things kept happening. St. Martin appeared to me in a sermon; St. Swithun in a Simpsons rerun. I was supposed to be procuring chocolate coins for St. Nicolas; learning another un-cake for the fourth Sunday in Lent; eating crepes on Candlemas, waffles on Annunciation, and grouses or something on Ascension. The whole year was full of St. Patrick’s Days I’d never heard of. I knew there were saints, but I hadn’t known they came with so many accessories. My red-blooded American reaction to the micro-cultural pressure was to ask who said I had to do this stuff . . . but what were we going to eat those days, anyway? I took the Handbook of Christian Feasts and Customs from my husband’s office and reshelved it with my cookbooks.

History has revealed that we were merely a pilot household for liturgical lifestyling. The aughts and 2010s had some blogs documenting observance of dumpling-based orthodoxies, but now the movement has organized. Gone are the years of flexing on noobs who didn’t know which herbs they were supposed to be plaiting last night. Kids these days are putting Around the Year with the Von Trapp Family at the top of their wedding registries. Liturgical lifestylers are not just looking great online, but posting recipes and activities well ahead of notable events so users can plan. They are even boxing up the liturgical year for mail-order celebrations. They are as committed to their program as preschool teachers are to apples in September, pumpkins in October, and turkeys in November. Liturgical living is a Thing.

“It’s not like there’s anything wrong with it,” another elderly mother said to me on the topic of these youngsters and their canonical pancakes, “but why are they doing it?”

I can think of a few reasons.

It begins with a culture growing less Christian, which prompts households to develop an internal culture that fills the void. Vacated and denatured Christian festivals have become placeholders for people who want to eat corned beef or candy canes on some kind of schedule. There are still cultural observances, but they are childish, arbitrary, and either meaningless or hostile to the old regime. Halloween is besieged by adult invaders, folk energy flows toward “holidays” like Pi Day and May the Fourth, and Walmart shelves hatch Peeps on February 15 regardless of when Ash Wednesday falls. Americans are dumping traditional holidays for parties occasioned by silliness.

More seriously, a set of alternate holy-days is rapidly gaining purchase. Pride Month now carries the moral weight once reserved for Lent and Advent, changing the nation’s mood, décor, and diet. Proposed federal holidays show an inclination to recognize activists and causes rather than broadly shared national experiences. There is a sea change going on in our customs and folkways, with significant consequences for society. How many workers feel comfortable telling a manager that they won’t be in for Good Friday, or that they’re not going to wear the rainbow logo shirt issued to everyone in the building?

There are less catastrophic reasons for liturgical lifestyling. Households run on order, but they are quickened by joy. Families need days to look forward to, a reason to clear clutter this afternoon, little things to brighten weeks without big things. Moms home with babies have long, lonely days; homeschoolers (or remote learners) don’t have a set of morale-boosting activities being provided to bored and crabby kids. A calendar with nothing on it is a heavy burden for the person whose job it is to keep people happy. The church year provides structure loaded with meaning. Its traditions for the home are not compulsory, but families choose to keep them. They chirk up and unite members of the household, connect them with other celebrating households, and bear a significance the Apple/Pumpkin/Turkey sequence doesn’t.

Liturgical household customs also teach. Shared stories help kids get through life, and parents naturally refer to characters to explain things: if you eat too much, you’ll feel like the Very Hungry Caterpillar post-binge; imitate flexible Frog rather than high-strung Toad. Children’s imaginations and moral reasoning are informed by the characters they encounter. Those characters can be superheros, Founding Fathers, TikTokers, suffragettes, literary figures, ancestors, Jedis, or saints. Not all options are equally good. The church year gives constant opportunities to befriend trustworthy characters. The saints stand on the same foundation on which the Christian household itself is established. If they come with mnemonic snacks, what’s the downside?

Doing churchy things at home makes people at home think about church, another benefit to living liturgically. My fourth grader asked me why we have to go to school on St. Lucy’s day. I explained to her that our peer group is more into underdocumented historical figures and eyeball buns than other people are. But during school chapel, she got to hear how St. Lucy surrendered vision and life to see Christ and dwell in his house forever. This fourth grader goes to chapel every day, and it doesn’t seem weird to her. Her home life and church life are not two separate things. On December 13th, it is St. Lucy’s day wherever she is, in the same way that it is Monday or cloudy.

It’s King Cake season again, and will be until Mardi Gras, Shrove Tuesday, and/or Pancake Day. A final benefit of the liturgical lifestyle is its uniting force. Liturgical and sanctoral calendars vary among Christian confessions, echoing more divisive pieties and doctrines. But when the things Christians have in common include commoner things—walks and bonfires, buns and roses—we have one more point of connection. As long as the season of squabbling remains upon the great house of God, we need some excuses to get everybody out of their rooms to do something fun together. You go to your church and I’ll go to mine, but let’s bake bread together on our knees. Then you can tell me how you got yours to look pretty.

An Open Letter to Karen Heller

Letter from the Electronic Jail