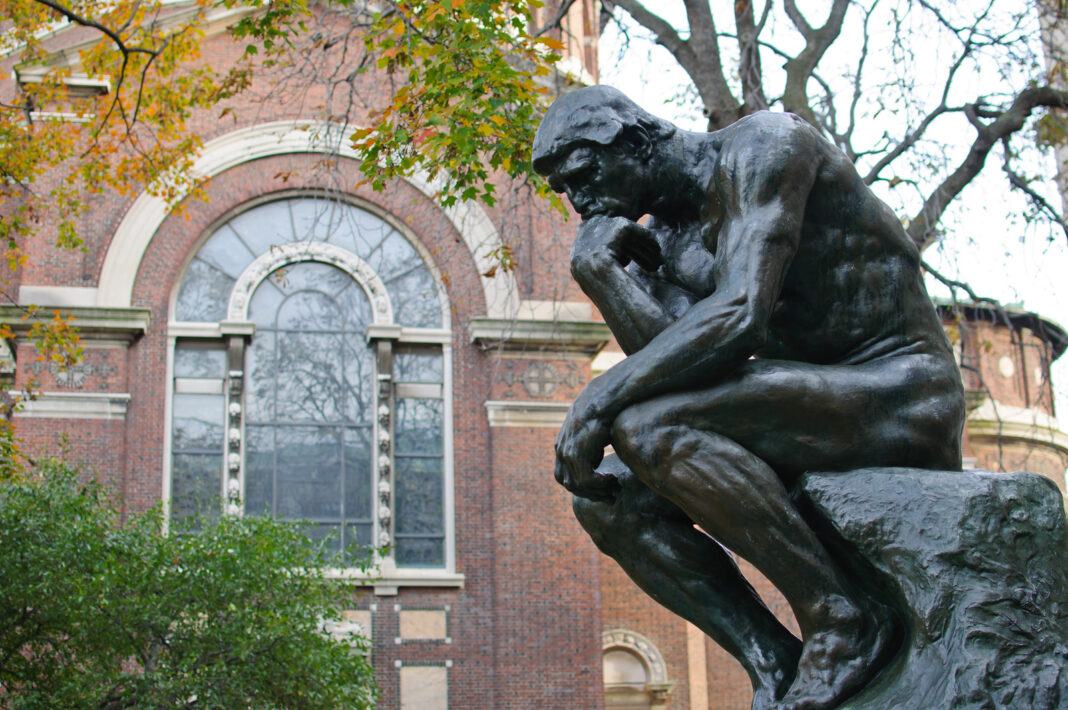 Kensington, MD. In his book Curriculum: A History of the American Undergraduate Course of Study Since 1636 (1977), the historian Frederick Rudolph ventured a heterodox opinion about the priorities of our nation’s institutions of higher learning. If someone striving to reform a college’s undergraduate curriculum made his case “in behalf of some perceived need or desire of the students,” Rudolph suggested, “he will soon discover his mistake: The institution is not really for the students, after all, but for the professors.”

These days, one might aim to modify Rudolph’s contention; if the past few decades of American educational history have taught us anything, it’s that our nation’s colleges chiefly serve the interests of their administrators. Still, it seems undeniable that many aspects of American university life have become standard primarily because they assist stakeholders other than undergraduates.

Our colleges’ approach to general education provides a perfect case in point. It is among the many strengths of Roosevelt Montás’s splendid new book Rescuing Socrates: How the Great Books Changed My Life and Why They Matter for a New Generation that its discussion of the undergraduate curriculum illuminates the ways in which the contemporary professionalized academy ministers to the needs of its faculty members at the expense of its students. This beautifully written monograph—part heartfelt memoir, part pedagogical cri de coeur—provides a morally and intellectually serious investigation of the value of the liberal arts. It also amounts to an indictment of the academic status quo, according to which the production of narrow, esoteric research trumps teaching, to the detriment of undergraduates and to society as a whole.

To be sure, Montás is far from the first to defend liberal learning in recent years. In our age of skyrocketing tuition costs and super-charged utilitarianism, many observers have rightly recognized the need to remind Americans of the virtues of a broad and humane approach to education. But in important respects Montás adds a welcome voice to this conversation. A longtime teacher in and erstwhile director of Columbia University’s famed Core Curriculum, Montás is ideally suited to plump for the Great Books model of general education to which Rescuing Socrates is devoted. What’s more, the book’s candid discussions of its author’s background and life experiences grant Rescuing Socrates an immediacy lacking in many other apologias for the liberal arts. Unlike so many of his fellow denizens of the Ivy League, Montás was not born with a proverbial silver spoon in his mouth.

At age 11 Montás moved from his native Dominican Republic to New York City, poor and without any prior knowledge of English. As he describes in one of the most moving parts of his book, in high school Montás rescued two volumes of the Harvard Classics series—a famous collection of canonical texts of the Western world—from a dumpster. Poring over three Platonic dialogues in one of the volumes, he soon became enraptured with Plato’s Socrates and thereby with the life of the mind. Montás ultimately earned a scholarship to study at Columbia University, where he’s remained—first as an undergraduate, then graduate student, and then faculty member—for his entire career. In chapters devoted chiefly to Augustine, Socrates, Freud, and Gandhi, Rescuing Socrates dexterously weaves Montás’s readings of classic texts with forthright analysis of their resonances in his own life. His book demonstrates that anyone—or anyone contemplative, at least—can benefit from a core curriculum based on transcendent authors of the past.

Critics often attempt to undercut such esteem for the study of canonical texts through political means; they insinuate that only knuckle-dragging right-wingers, bent on indoctrinating students into the supposed glories of the West, laud this approach to general education. These intimations, long the bread and butter of many academics, have seldom made much sense. After all, the most vociferous opponents of the Great Books typically esteem variations on the elective curriculum that came to dominate American higher education in the late nineteenth century. As any decent history of the university movement in the US will demonstrate, the original proponents of free election justified their curricular ideas on the basis of laissez-faire economics and social Darwinism. “In education as elsewhere,” wrote Charles W. Eliot (1834–1926), a longstanding president of Harvard University and one of the most energetic opponents of the prescribed curriculum of antebellum American colleges, “it is the fittest that survives.” Those quick to attach malign ideological motives to the supporters of core curricula ought to take a good look at the intellectual wellsprings of their own pedagogical designs.

In any case, the political intimations that undergird so much criticism of core curricula obviously won’t cut the mustard as a response to Montás. Although he wears his politics lightly in Rescuing Socrates, readers quickly discover that Montás is a man of the Left. And his book provides a passionate case that Great Books courses—which, he stresses, must include the works of at least some writers not typically viewed as part of the Western tradition—speak to everyone who wants to lead a satisfying life. With characteristic frankness, Montás maintains that “we condescend to” minority students “when we assume that only works in which they find their ethnic or cultural identities affirmed can really illuminate their human experience.”

I know for a fact that Montás doesn’t just talk the talk, but also walks the walk. My wife was one of Montás’s students in the Columbia Core, back when Montás was still a graduate student. To this day, she maintains a deep devotion to him as a teacher: a model of intellectual humility (a characteristic, she tells me, often in short supply among the Columbia faculty), Montás inspired reverence among his pupils—a reverence not dissimilar from that Montás feels for the late Wallace Gray, his own teacher in the Columbia Core.

As if his Herculean efforts on behalf of Ivy League undergraduates aren’t sufficient evidence of his pedagogical bona fides, Montás has also striven to reach marginalized populations, spearheading an English-as-a-second-language program for immigrants in New York City and leading Great Books seminars for the underserved over the summer. “When making the case for liberal education to low-income students and families,” Montás writes, “I often point out that there is a long tradition of steering working-class students towards an education in servitude, an education in obedience and docility, an education in not asking questions.”

So, bereft of political insinuations and ad hominem arguments, what can critics say about Montás’s appeal to the power of the Great Books? Lewis Menand’s churlish review of Rescuing Socrates in the pages of the New Yorker hints that, deep down, their disdain has little to do with politics—and much to do with a resistance to change. Montás’s earnest little book succeeded in getting Menand’s dander up, compelling him to paint its author as a backward-looking grump. For example, he selectively—and misleadingly—quotes from Rescuing Socrates to provide his readers with the impression that Montás is some sort of anti-science zealot.

In a sentence that gets to the heart of his scorn for the Great Books model of general education, Menand opines that humanities professors, rather than encouraging self-reflection and self-knowledge in the undergraduate classroom, “should be defending their role in the knowledge business.” Menand contends that humanists must continue to fetishize the writing of narrow, peer-reviewed research, the production of which has done much to scientize our higher education and marginalize the humanities. Keep on doing what hasn’t worked for over a century, Menand counsels.

Yet even Menand recognizes that the humanities are not faring well in contemporary American higher education. In his review, in fact, he chastises Montás for failing to offer statistics that back up the concerns Rescuing Socrates articulates. All is not well for the humanistic “knowledge business,” it appears.

So, what’s Menand’s cure for the maladies afflicting the modern humanities? Humanists, he ventures, “need to connect with disciplines outside the humanities, to get out of their silos.” In short, Menand believes that interdisciplinarity can save the humanities.

This is a peculiar conclusion on his part, since Menand has previously written so perceptively about interdisciplinarity as an academic chimera. In The Marketplace of Ideas: Reform and Resistance in the American University (2010), Menand noted, “Interdisciplinarity stands for the notion that what is holding things back is disciplinarity, the persistence of the academic silos known as departments, and that if colleges and universities could get past that outmoded dispensation, a lot of their problems would disappear.” “But,” he continued, “interdisciplinarity is not, as a thing in itself, subversive or transgressive or transformational or even new. In many respects, interdisciplinarity is a ratification of existing arrangements. And it can become a rationale for arrangements that are less accommodating than the ones professors live with now.” Somehow, over the course of a decade, the false god of interdisciplinarity has become for Menand a cure-all.

One gathers that Montás’s perspective on general education remains unpopular with academics such as Menand in large measure due to Montás’s vision of liberal-arts teaching as a calling. The reward structure of the professionalized academy necessitates that faculty members (humanities professors included) place overwhelming emphasis on the creation of recondite research disconnected from the lives of Americans. Rescuing Socrates demonstrates that this hierarchy of academic values is dubious, if not pernicious. The curricular smorgasbord so common to American institutions of higher learning has won out not because it mirrors the ideological proclivities of the faculty, but because it makes professors’ lives easier. Humanists, unburdened by the greater pedagogical preparation core courses require, can continue to churn out peer-reviewed research and climb the totem pole of the professoriate. It appears to be a minor concern to many of them that they accomplish this feat by minimizing in the classroom and their scholarship the topics vital to human flourishing that are animated by transcendent texts. Montás deserves great credit for illuminating the perverse priorities of American higher education throughout Rescuing Socrates.

It must be admitted, however, that the book suffers from occasional missteps. A fuller engagement with the history of the liberal arts than Montás musters would have enriched the book. Rescuing Socrates neglects the role of the physical sciences in the liberal arts tradition since antiquity. Accordingly, he errs in chalking up the goal of the liberal arts to introspection and self-improvement—a goal appropriate for the humanities since their reshaping in the Italian Renaissance but not the raison d’être of, say, physics.

Columbia University’s decision to keep mathematics and the hard sciences outside of its Core seems to have contributed to Montás’s science-less vision of the liberal arts. More historical analysis on Montás’s part, moreover, would have underscored the fact that the postmodern movement was far from the original threat to core curricula. Indeed, the drive to replace prescribed coursework in American higher education triumphed in the late nineteenth century, well before any fancy French theorists were expatiating on the nonexistence of transcendent truths.

But these are minor criticisms of a book aimed at a popular audience that demonstrates so viscerally the benefits—indeed, the necessity—of the liberal arts in a pluralistic democracy. Eminently quotable and engagingly written, Rescuing Socrates is a rich resource for those who care about liberal education.

The Formative Power of Metrics