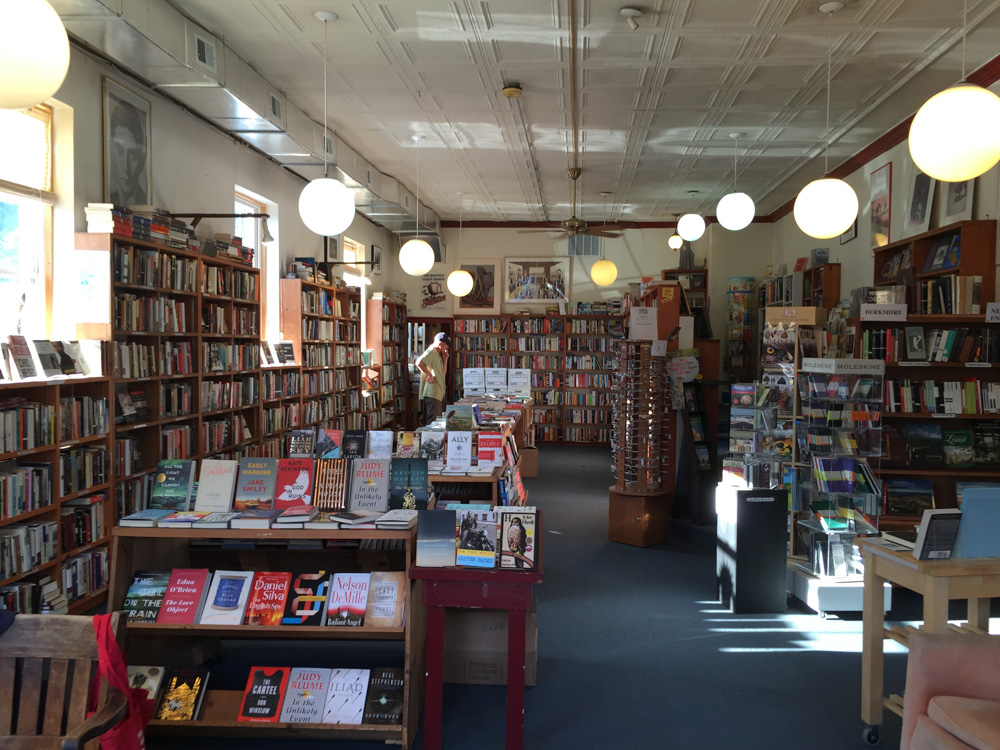 Hamden, CT. Is there another art form as dependent on chance as the documentary film? In 2019, director A.B. Zax set out to capture the story of the appropriately-if-unimaginatively-named The Bookstore, a fixture of Lenox, Massachusetts owned and operated by its proprietor Matthew Tannenbaum since 1976. With the arrival of COVID-19 just months later, Zax suddenly had a very different story on his hands. Hello, Bookstore (its title derives from the greeting Tannenbaum invariably gives when answering the establishment’s telephone) provides a poignant chronicle of what was lost in the early stages of the pandemic when the absence of vaccines and an incomplete understanding of the virus necessitated extreme caution in the interest of saving lives. Tannenbaum, who before COVID can be seen lingering over every customer interaction with a story or a treasured passage from a favorite book, is reduced to struggling to hear credit card information shouted through a plate glass window as part of bookselling in the contactless age. Business is poor. It takes Tannenbaum a week to do the volume he once did in a day.

It is worth pausing for a moment to consider why this should be so. Books would seem well positioned to be resistant to (or even thrive during) a pandemic. People stuck at home, unable to spend money on other forms of entertainment, and in desperate need of diversion from the state of the world are presumably an attractive target market for publishers. And indeed, by some measures the pandemic has been quite good for book sales. What Zax’s film beautifully highlights – and as the struggles of at least some independent bookstores during a time of robust demand for books confirm – is that establishments like The Bookstore, when at their best, are not exclusively or perhaps even primarily in the business of providing people with printed texts. They are places in which proprietors like Tannenbaum foster community in the context of a shared love of the written word. When the need to physically isolate undermines the ability of such places to foster this community, they are at risk of becoming less essential to their patrons. A customer who has to pick up his or her purchases from a stool outside the front door is a customer who may ultimately conclude that buying books off Amazon is just as good. The challenge is to remind people what we lose when this happens.

The decline in The Bookstore’s business soon brings it to the brink of collapse, and Tannenbaum launches a GoFundMe campaign in an attempt to save it. It is not much of a spoiler to reveal that the fundraising effort is an enormous success. Hello, Bookstore does not seek to create any suspense on this point. Tannenbaum is shown crafting his plea for support and shortly thereafter celebrating the results. This mirrors the trajectory of the campaign itself. Less than 24 hours after Tannenbaum launched his appeal, the initial goal was met. Faced with the potential loss of what The Bookstore really represents—a place for building community and not merely selling books—the townspeople of Lenox rallied to its side.

And to Tannenbaum’s side. The warmth customers feel for him is palpable on screen and reflects the warmth he clearly feels for them. Tannenbaum says of life at The Bookstore, “every day is like Christmas.” As he quotes one customer as observing, Tannenbaum gets to spend all day surrounded by the things he loves, talking to people about those things, who only interrupt him when they want to give him money. I would only add that Tannenbaum is doing all this in a place he clearly loves. To borrow an expression from his fundraising appeal, he and Lenox belong to each other. It is where he has built a business and a life, raising two daughters who the film suggests also remain rooted in Lenox and in their father’s store.

The degree to which Hello, Bookstore resonated with me was in part a product of the setting in which I saw the film—Cine 4, a small, family owned theater itself seeking to find its footing after an extended COVID closure. Located just three miles from a corporate megaplex, Cine 4 has hung on despite dated facilities and an absence of typical movie-going amenities. What it lacks in flourishes it makes up for in what one loyal patron recently described as its “neighborhood feel.” It is the type of place where one of the two brothers who took over the theater after their father became ill is likely to be the person to sell you your ticket. Where staff ask you how you liked the movie on your way out the door. Where other patrons have been known to spot $20 to cashless customers unaware that Cine 4 doesn’t take credit cards. Cine 4 is also the type of place willing to give fellow underdogs like Hello, Bookstore a shot, something the megaplex wouldn’t dream of doing. After watching this movie in that theater, the need to ensure the survival of local institutions has never been clearer to me.

Should We Begin To Reconnect?