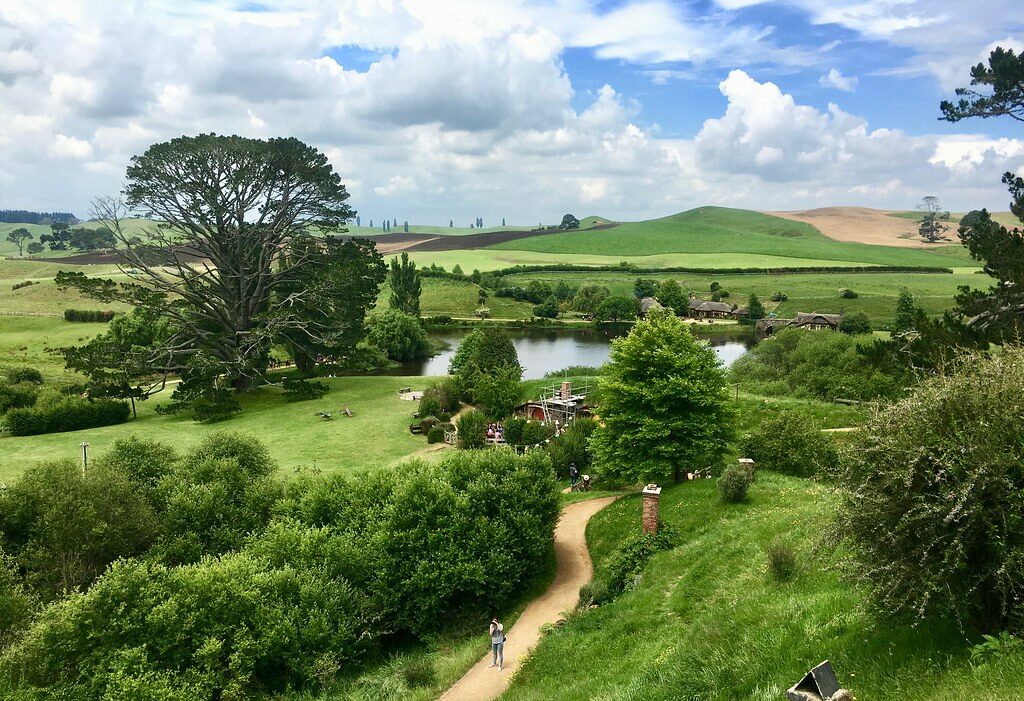 Boise, ID. Unlike The Lord of the Rings, J.R.R. Tolkien never finished The Silmarillion. He initially set out to write an epic mythology for England (with enough room that other minds could fill in the blanks), but later in life admitted the task was beyond him, going so far to call such an undertaking “absurd” (Tolkien’s Letters, 131, 180). He did produce a tremendous amount of histories, poems, metaphysical essays, forgeries of manuscripts in Old English, maps, annals, and more, but he consistently returned to make adjustments or add something new. Much like Niggle who, in Tolkien’s short story Leaf by Niggle, never managed to finish his painting of a tree before his journey, Tolkien left behind an incomplete masterpiece. But this incompleteness lends credibility to Tolkien’s mythology.

We are most familiar with his mythology as The Silmarillion, which Christopher Tolkien, his son and scholar in his own right, described as “a compilation, a compendious narrative, made long afterwards from sources of great diversity (poems, and annals, and oral tales) that had survived in agelong tradition.” Further, he wrote, “this conception has indeed its parallel in the actual history of the book, for a great deal of earlier prose and poetry does underlie it, and it is to some extent a compendium in fact and not only in theory.”

In the many retellings, Tolkien only ever finished one version of The Silmarillion’s narrative, and that was a summary of events. This is not even the version we are most familiar with: not the 1977 The Silmarillion published posthumously, but the Quenta Noldorinwa. The text is found in The Shaping of Middle-earth, the fourth volume of The Histories of Middle-earth series. In the Quenta Noldorinwa we find a prophecy of the end times, the Noldor as Gnomes, the Valar as Gods, and the Maiar as the children of the Valar, just to name a few changes from the 1977 The Silmarillion.

It is the broader set of texts available in The Histories of Middle-earth (along with some others) that Christopher Tolkien used to pull together The Silmarillion as published in 1977. Reflecting on the process, he wrote, “On my father’s death it fell to me to try to bring the work into publishable form. It became clear to me that to attempt to present, within the covers of a single book, the diversity of the materials–to show The Silmarillion as in truth a continuing and evolving creation extending over more than half a century–would in fact lead only to confusion and the submerging of what is essential. I set myself therefore to work out a single text. . .”

A wonderful text, indeed, and the most approachable version of the events of the First and Second ages, although it is incomplete in of itself. References to “Tol Eressea” go unexplained with answers found only in those broader works, and these answers lead us one after the other to the surprising discovery that Middle-earth is, in fact, our own world in ancient, ancient history.

We hear of a “Last Battle and the Day of Doom” in the 1977 The Silmarillion, but any further answers will not be found in that book. In other texts, we encounter this Last Battle again, and see J.R.R. Tolkien’s own details: the prophecy of Mandos concerning the end times. Now we receive that missing piece from The Silmarillion, that missing piece which every great mythology needs.

The 1977 The Silmarillion exists as a compilation of incomplete texts, pulled together from writings throughout Tolkien’s life, and functions as a summary of events which are told with more detail in other manuscripts. As Tolkien himself said in a letter to Mrs. Mitchison on 25 April 1954 while discussing the history found in The Lord of the Rings: “But as much further history (backwards) as anyone could desire actually exists in the Silmarillion and related stories and poems, composing the History of the Eldar (Elves).” Here we see he considered The Silmarillion as one piece of a broader history including both other stories and poems.

Yet even these broader stories are not finished (in the sense that Tolkien wrote a definitive and final version), however, I believe the unfinished state is not a weakness of his histories; rather, it plays into Tolkien’s original goal, even if done accidentally.

Let us remember that Tolkien was partly inspired by the Norse tales. This led to his original composition, The Book of Lost Tales, which is now published in two volumes, and, unsurprisingly, unfinished. Over time, his original ideas evolved and changed. A climactic moment was when a version of The Silmarillion (an unfinished Quenta Silmarillion along with The Lay of Leithian) was rejected for publication, and, like Niggle tacking on his smaller paintings around the edge of his great tree, The Hobbit was swept up into the great mythology because of its success, and the publisher’s desire for more books featuring hobbits. This mixture of The Silmarillion and The Hobbit gave birth to the sequel of both: The Lord of the Rings.

There is a key component of mythologies which might be overlooked here: different traditions. Take, for example, the story of Daedalus and Icarus’s escape from the labyrinth. In both of Ovid’s versions (found in The Metamorphoses and Ars Amatoria), there are differing details between the two tellings, but in each the father and son escape from Crete by the construction of wings. In Pausanias’ version, Daedalus invents sails, not wings. These versions of the same story with (sometimes dramatically) different details are a feature of mythology.

Alternate versions of events taken from various traditions are already a feature in Tolkien’s work. A work distinct from but still an account of the same events from The Silmarillion is The Annals (which has its own retellings and variations). In the preface to The Shaping of Middle-earth, Christopher Tolkien wrote that “The Annals would develop into a separate ‘tradition,’ parallel to and overlapping but distinct from ‘The Silmarillion’ proper.” The Annals were used by Christopher Tolkien in the compilation of the 1977 The Silmarillion. He quoted them throughout the book.

These tellings provide not only more or different detail, but moments of beauty not found in the 1977 The Silmarillion. For example, the Maiar of the Sun, Arien, in this version of the myth called Urwendi, must first be baptized in the remnant of the light of the golden tree before she is capable of sailing the sun:

But a great thought came into the heart of Urwendi, and she said that she was not adread, and begged leave to become the mistress of the Sun and to make herself ready for that office as Iluvatar set it in her heart to do. Then did she bid a many of her maidens follow her, even of those who had aforetime watered the roots of Laurelin with light, and casting aside their raiment they went down into that pool Faskalan as bathers into the sea, and its golden foams went over their bodies, and the Gods saw them not and were afraid. But after a while they came again to the brazen shores and were not as before for their bodies were grown lucent and shone as with an ardour within, and light flashed from their limbs as they moved, not might any raiment endure to cover their glorious bodies any more. Like air were they, and they trod as lightly as does sunlight on the earth.

This moment is not captured in the 1977 The Silmarillion, and is distinct to The Book of Lost Tales. Here we find a holiness of the sun which requires a baptism of fire before Urwendi can take up her office. Such moments of beauty, both in the story and in the telling of it, are featured throughout the sources Christopher Tolkien used when he compiled the 1977 edition of The Silmarillion, now readable in The Histories of Middle-earth.

Viewing the versions of these stories as different traditions allows us to also engage more deeply with Tolkien’s creative process. There are many, many starts to projects, and very few finishes. He revised, layered meanings one atop another, treated his stories with a Realness that acts as the bedrock of his mythology. By approaching his stories with a similar Realness we engage with the subcreated the way the author did, and learn from his messy artistic process.

The traditions of Tolkien breathe an authenticity into his mythology, and each grasps at the world in the author’s imagination: different lenses through which to see “the Real thing,” and Middle-earth becomes clearer as one gazes through each in turn. Or, to understand more fully Tolkien’s approach to these traditions, we should not forget that The Silmarillion was passed down to us–legend out of history–by the elves of Tol Eressea into the hands of Aelfwine. He translated the tales from the Elvish into the Old English, which J.R.R. Tolkien then translated into our modern tongue.

As laid out for us in The Lost Road and Other Writings, The Silmarillion “is drawn out in brief from those songs and histories which are yet sung and told by the fading Elves, and (more clearly and fully) by the vanished Elves that dwell now upon the Lonely Isle, Tol Eressea, whither few mariners of Men have ever come… Of whom was Eriol one, that men named Aelfwine, and he alone returned and brought tidings of Cortirion to the Hither Lands.”

This Realness, a touch of authentic mythology–much like Niggle who finally saw the Real Tree he had modeled his painting after throughout his life without knowing it–comes alive when the legends are approached the way they were intended to be: as if they were true. Here Myth becomes palpable. It walks on the borders of history. Reaching out, we can feel its potency, its beauty, and, as we look through the many traditions, come to know it more.

Later in life, Tolkien looked back at his goals to write a mythology as beyond him. Perhaps the artist did more than he thought.

Community Greening in The Lord of the Rings: Samwise Gamgee and...