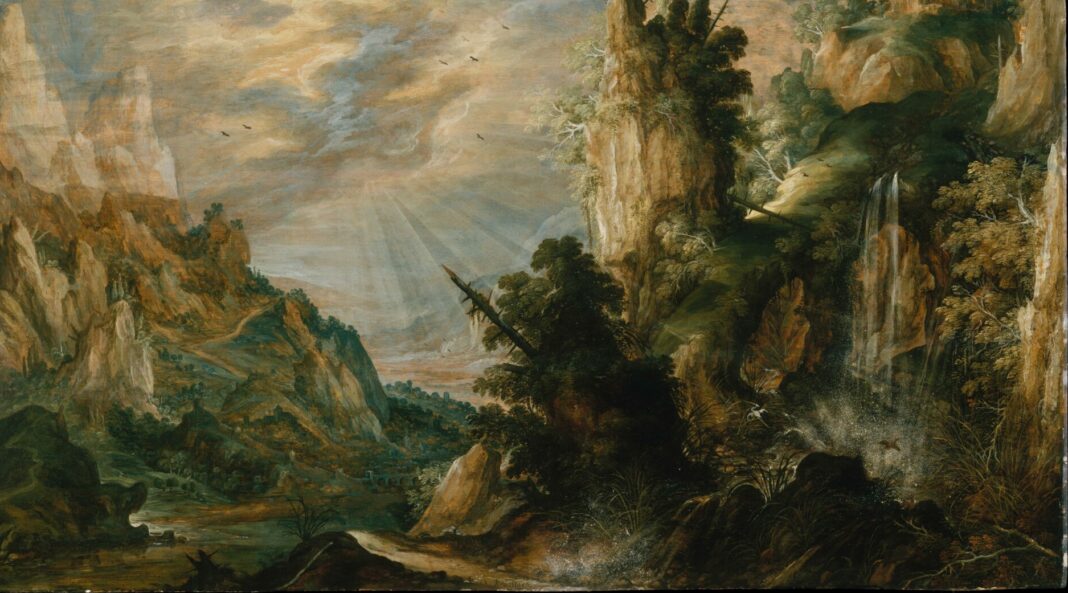 Ancaster, ON. So does it matter if the audience for a book is caught off-guard? I mean, if the audience – who assume they are going to plunge wholeheartedly into the fierce stream of a book – find after a bit that they need to retreat a little to dabble in the shallows, get their feet wet, take it slow, try little inrushes here and there? In fact, might this even describe a healthy kind of disorientation?

George Willcox Brown’s book A Catechism of Nature opens by explaining that its concern is to “address a fundamental problem vexing humanity in our time, the problem of ecological degradation,” and to gesture toward “the outline of a solution, drawing on resources from the tradition of Christian ascetical theology.” This sounds both timely and prescient, and I entered the stream with cheerful anticipation. Like Brown, I’m an environmentalist deeply concerned about ecological degradation. Like Brown, I’m an Episcopalian (a.k.a. Anglican) with some interest in what Christian traditions of thought and prayer might have to offer in response to the ecological crisis. Like Brown, I love to spend time in “nature.”

However, the book still caught me off-guard. I thought I knew what kind of book to expect – in a general sense what genre, what approach, what readerly outcomes – and I was most of the time wrong. Partly because, unlike Brown, I don’t know the neoplatonist tradition of Christian mysticism. And particularly because, unlike Brown, I am not a hunter.

Indeed, hunting is about as alien to me as little green men and their spaceships. Whereas for Brown, hunting is key to his understanding of what it means to be fully human: “I love to hunt and fish, but these activities are really more occasions for something else: for looking at the natural world and trying to understand it and, by trying to understand it, trying to understand something of what is above, and behind, and beyond it.” Or, as he says at the end of the book, “it is the progression from experiencing nature to delighting in it and desiring to know it that has led me to regard hunting as the highest form of engagement with the primary realities of nature.”

So, reading this little book was an Experience. I needed very consciously to practice a particular kind of empathy, the kind I’m always telling my students that reading encourages and promotes. I needed to try to think alongside GRB III, a neoplatonist Episcopal priest and dedicated hunter who lives in southern Georgia, and think less like DCB, a retired English professor from the UK who inclines toward vegetarianism and lives in southern Ontario.

To begin, then, at the beginning. Right away in his introduction Brown is concerned to emphasize that “[l]ife apart from the Creator and out of harmony with creation are phenomena by nature connected to one another” – that’s to say, if we don’t know God’s creation we likely won’t know God very well either. Brown cites population growth and urbanization as key factors in the contemporary disconnect from “the primary realities of creation” in his book-title; the concentration of people in cities means that “many people live their lives almost entirely cut off from the primary realities of nature and of natural processes.” Sounding a lot like Wendell Berry, Brown argues that “the collusion of governments with capital” favours supermarkets and big box stores over small family-owned businesses through a system of state regulations alongside economies of scale. Because the material world is seen as something to manipulate rather than to celebrate, the forces of economic and social liberalism end up degrading not only the land and the oceans but also human life itself. In response, Brown stresses the need to pay attention to “what God has said, and nature is his most primordial and exoteric word”; after all, within this word, human nature is situated too. But “[l]ess and less in our time and place do we hear the most primordial of God’s words—the song, one might say, of creation’s fundamental realities”; “[w]e have lost the ability to speak and understand the language of creation.” Where might we look for a remedy to this hearing loss?

It is in describing himself as a neoplatonist that Brown signals his primary response to the malaise of an instrumentalist engagement with nature. He talks about “natural contemplation” as a means to a recovery of the supernatural dimension of the natural. He turns us to the tradition stemming from Pseudo-Dionysius the Areopagite (5th to 6th century A.D.) and the notion of natural contemplation as a path, developed by Maximus the Confessor (580-662 A.D.) into an understanding of humanity itself as “the permeable boundary between nature and supernature.” It is, writes Brown, humanity’s “standing simultaneously on the highest rung of the ladder of nature and the lowest rung of supernature that underwrites our status as priests of creation,” a position in the hierarchy that will delight some readers and bother others with its emphasis on human exceptionalism. Brown goes on to argue that the contemplation of nature by human beings imbues the world with the form of God, bringing to it the salvation that preserves things in the forms which God intended. This is neoplatonism in a rather esoteric form, which left me struggling (human contemplation brings salvation to things?). By this point I had also incidentally been quite bothered by the way the line-structures of Robinson Jeffers’ poems cited here were murdered (human misquotation brings damnation to poetry). But I moved on hopefully to the second, and longer, part of the book, which is comprised of a number of brief “poetic meditations” describing Brown’s contemplative experiences with different aspects of creation.

These are scripturally grounded, geographically widespread (from Texas to the African veld to the South Pacific), and thought-provoking to read. Brown’s theological/philosophical imagination relates everything to the natural world not only of animals but also of ocean depths, dammed rivers, deep-rooted prairie flowers and grasses. He declares that “the earth herself enacts the baptismal liturgy in prototype each spring,” and describes fall seeds as “students in a catechetical school” because they wait to be “baptized” by spring rains. He reads the turning of the seasons as “sacramental,” since the earth declares at every point the presence and sovereign activity of God. Brown also doesn’t shy away from considering the dangers of anthropomorphizing animals, who have a dignity of their own but “over the horizon of rationality”: he is clear in affirming his belief that human excellences excel those of animals – consequently, “people who see our own species as the chief obstacle to conservation are only half right. Man is at once the chief obstacle and the only possible solution.” Brown’s eclectic mind connects ideas across centuries and geographies and genres in wild profusion, and his reference points stretch from Cardinal Newman and Kierkegaard to Václav Havel, from Aquinas to Wittgenstein and T.S. Eliot, from Joseph Ratzinger to Brown’s bird-dog Jeb.

Perhaps inevitably, it can sometimes be challenging for the non-hunter to enter into Brown’s trains of thought:

When I pull the trigger on my shotgun and see a duck fold and fall, when the hunt becomes the kill, it will be a small moment in a process of seeing and seeking-to-understand, a process that stretches from spring rains to thanks returned after a satisfying midwinter meal, and back again.

The non-hunting reader may feel bemused to hear that the stillness and silence required in hunting remind Brown of “the still silence of our crucified Lord who sees all and disturbs none,” and therefore teaches him to reach out to Christ to find real peace. He does suggest in the section called “Blood on my Hands” that, “within the context of globalization and the hegemony of corporate food production,” one may see hunting as subversive, in that the hunter will eat only what animals he has himself killed. But there’s more to it than that: after a solitary early-morning teal shoot, Brown writes,

Back home, as I was dressing the birds, their blood and feathers warm and sticky and beautiful on my hands, I thanked God for the intricate mystery of it all, for the life that had been theirs and was now mine, for the food they were becoming, for land and friendship and water, and for the grace of divine nourishment at every level of the world’s being.

Blood and feathers sticky on the hands as an aspect of grace. Hmm. Intricate mystery indeed.

In his epilogue, Brown meditates on the distinction between the “natural” and the “unnatural.” It’s too simple, he says, to distinguish “unnatural” things as those marked by human input, since conservation and stewardship may also intervene into the “natural” to restore parts of nature – but it’s also too simple to see hunters merely as destructive of nature. One of Brown’s prized trophies is an old impala: “Every creature dies, and I had killed this one. But I had killed him quickly, at his strongest, freest, and sharpest, and I would incorporate him into my body and mind as food and memory.” And because the predator quite literally embodies the prey in eating it, Brown makes a mind-blowing leap to the eucharist, where “what is consumed is the body of the ‘Lion of the tribe of Judah’ (Revelation 5:5) – the apex predator par excellence.” Is this scriptural image of the lion intended to suggest a predator? I, the non-hunter, strongly suspect not. Brown, the hunter, effectively argues that it is – and that, in parallel, the Christian hunter is both the consumer and the consumed, in that he is called to be “for” the life of the animals he hunts, and must learn about the animals’ behaviour and habitat as much as about his own:

It is this intimate experience of the primary realities of nature, of the layers of their interconnection, and of my own embeddedness within them, that I cherish most about hunting. It is what leads me to place hunting at the top of my hierarchy of experiences in nature.

In the final analysis I am of course in accord with Brown that God calls every Christian to love, honour and conserve “creation’s primary realities.” He and I will both declare that for Christians a recognition of God’s love for and ownership of the world, along with His gifting it to us to care for it, must be “the foundation for environmental ethics.” It was heartening to be reminded, too, that “delight in creation is a facet of our likeness to God …, and its abatement therefore is a symptom of sin.” If I remain unconvinced by a number of what seem to me Brown’s wildly ingenious arguments particularly around hunting, I am grateful for his admission, with Havel, that “there is something in the order of being which evidently exceeds all our competence.” Perhaps I can yet learn more from him, about what Christian environmental ethics must look like – and not only for a hunter in southern Georgia.

Not Hasty Enough: The God of the Garden by Andrew Peterson