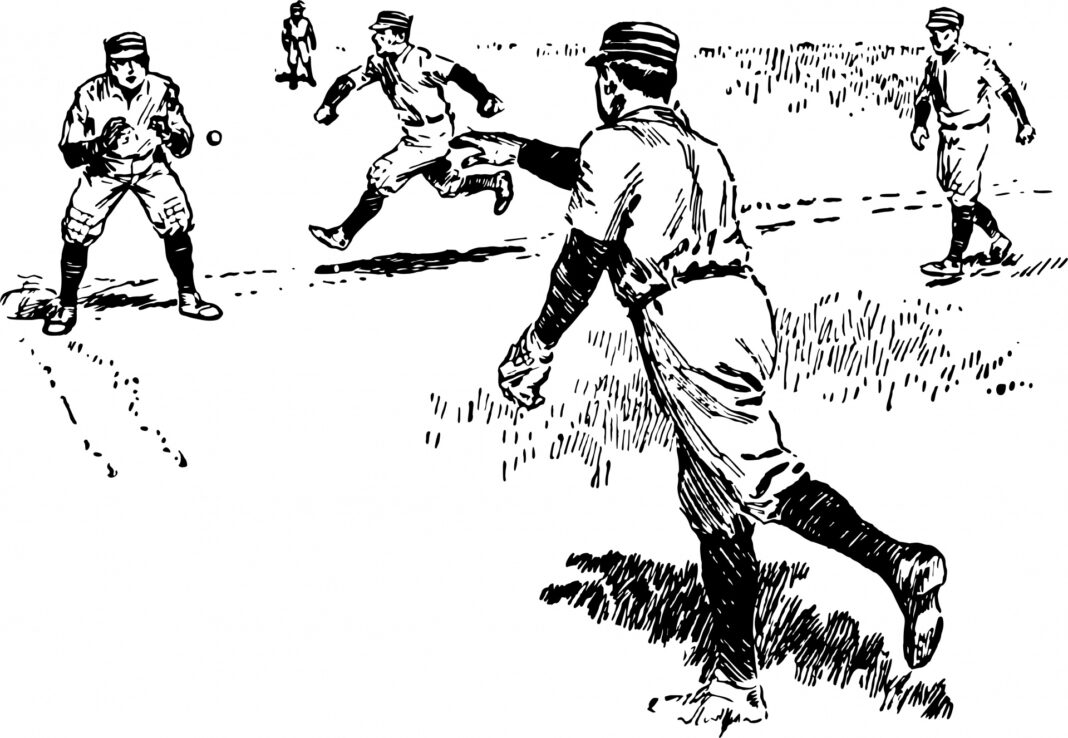 The sun lit the park for a little league all-star baseball game. A cool breeze cooled some of the sun’s heat and made it bearable. Not long after the game started, the sun moved along just enough that the line of evergreen trees behind the bleachers became providers of shade. The setting, at that point, turned idyllic.

In idyllic fashion, our team hit the ball. Each player through the top of the order reached base by way of greeting the ball with his bat. The other team did not field cleanly the hits that could have been handled and turned into outs, but even those errors did not outnumber the number of legitimate hits our line-up made. With the bats doing well and with zero outs against our team, I hoped our oldest son could keep the horses running the bases and reaching home. Had he struck out swinging at a tough pitch or chopped one into a ground-out or sent up a pop-fly, which might very well have driven in a run, I would have been pleased, for part of a parent’s desire for his children is that his children contribute, and sports provide ample opportunity for kids to learn the significance of contributing to a community. But when our son swung at two high pitches and fell behind in the count, I was frustrated because he was not playing according to the training he’d received from me, his mom, his granddad, and his coaches. Competing to your best ability, according to good training, and not winning is still respectable; such failures mark much of our existence. Our calling is not to be victorious but to be faithful. In contrast, competing with an indifferent or sluggish hand is disrespectful. Such an attitude disobeys Quoleheth’s injunction: “whatsoever thy hand findeth to do, do it with thy might.”

Our son stuck in there, fought his way to a full count, then drove the ball into centerfield, a good base hit. His mom and I, along with his coaches and teammates and fellow fans, cheered. We all cheered for each of the players. They were playing focused, measured baseball and ratcheting up a significant lead. It was fun. More importantly, it was good.

A few of us whose kids played on the same team during the regular season commented on how we’d been waiting for this kind of consistent hitting and fielding. Then someone who attended all our regular season games said, “Well, it’s been building to this.”

Later, in the car, I told my wife that I could feel her soul and mine draw back at the remark. Our regular season team, managed by kind, intelligent, dynamic coaches, became well-acquainted with defeat, to some extent because we weren’t a great team, maybe not even a good team. Defeat visited us, oftentimes, with interest that compounded by the inning. But our team was not a bad one, not even terrible. Yet we managed to embrace defeat as if it were an immutable fate.

I am not bemoaning defeat. In an interview on NPR’s Fresh Air, author Pat Conroy discussed his memoir, My Losing Season. Conry endured a season of consecutive defeats while playing basketball at the Citadel, but he said he learned more in that losing season than he’d ever learned playing basketball. Reality entails defeat and the question becomes, will we persist? Will we persist in strife, vainglory, or bitterness; or, will we persist in the pursuit of excellence? Murray Ross’s essay “Football Red, Baseball Green” notes how baseball is a symbol for life itself. We start at home plate with the intention to return to the plate; after rounding the bases, we come home. Our journey concludes. How well did we work, and how well will we face the imminent defeat of death? There is much to be learned in defeat, much that is good.

But the losses that seemed to occur most often for our little league baseball team were those that came from player preparation or positioning. Too often players were put in positions for which they were ill-equipped and ill-prepared and allowed to remain in those positions until the team had been shoveled beneath an insurmountable amount of dirt. It’s one thing if your team simply lacks the personnel to fill key positions. It’s also one thing to give young players an opportunity to play more than one position and to allow them to make mistakes, for error is often the way humans learn. As Chesterton said, “If a thing is worth doing, it is worth doing badly.” Yet, as he clarified, this is “not an excuse for poor efforts. It is perhaps an excuse for poor results.”

However, when the coaches fail to put players in positions where they and the team have the best opportunities for success, the team endures something akin to a self-inflicted wound. Such decisions by the coaches sometimes come from the pressure parents put on coaches, pressure to make sure the parents’ child not only plays but plays a significant position. Practices allow coaches to better predict how well a player will do in a specific position, but a game, while able to entail teaching moments, is not practice. Getting buried in the dirt and tread upon because the wrong athletes are held in crucial positions while more capable athletes are left stranded in places contingent upon the success of those key positions is a defeat by friendly fire. When our team lost like that, and they lost regularly, the same person who said, “Well, it’s all been building to this,” would offer the refrain of, “As long as they have fun.”

Yet the experience of losing is not fun. And it shouldn’t be.

We should, then, stop offering fun as a salve for defeat, especially self-inflicted defeat. Instead, I want to put forth that we approach youth sports which are part of education not by idolizing Fun but by prioritizing higher goods: joy, wisdom, and a love of learning.

The Higher Goods of Play

Playing well is better than Fun. It produces the kind of competitive spirit that mirrors good drama. Good drama, like good art, reveals some truth about reality; it clarifies life and enlivens the players and the audience to face life. Such an experience can bring joy — a transcendent reality that outshines the deceptive, glittering lights paraded by the flightless specter of Fun. But where Fun is ubiquitous, like advertisements on social media and sugar in the American diet, it takes effort and time to find joy.

Joy is the crux of sports, for sports is a fine art, and, as Phillip Donnelly has written, “fine arts are distinguished not by a complete absence of purpose but by having a particular purpose…enjoyment. The root word of enjoyment is joy, and joy means “cheerfulness, i.e. calm delight; gladness.”

What about informal sports? If in a game of backyard wiffle ball or pick-up basketball or, as with my wife’s family, Thanksgiving Day football or several rounds of summertime badminton, does playing well matter? Yes. Of course the adults shouldn’t go one hundred percent if competing with kids, and certainly, to think again of Chesterton, much will be done badly. But even in these cases, joy depends on the appropriateness of the participants’ actions.

More to the purpose of this essay, organized youth sports should challenge students to be dissatisfied with amusement or entertainment in their pursuit of excellence. Our culture is soaked in entertainment, the preponderance being of a low quality. While it can be entertaining, sports also offers an education. An approach to sports, then, that offers only Fun as its ideal diminishes, first, the sport, and second, and most vital, the human being. Our ancestors knew this danger all too well. Qoheleth, for example, experienced the emptiness of Fun as a chief desire; he called it vanity, a vapor. And according to the ancient Athenian rhetorician and philosopher, Isocrates, physical education and mental education are “twin arts — parallel and complementary” and should not be sharply divided:

The nature of man is compounded of two parts, the physical and the mental, and…of these two the mind comes first and is of greater worth; for it is the function of the mind to decide both on personal and on public questions, and of the body to be servant to the judgements of the mind. Since this is so, certain of our ancestors, long before our time, seeing that many arts had been devised for other things, while none had been prescribed for the body and for the mind, invented and bequeathed to us two disciplines, physical training for the body, of which gymnastics is a part, and for the mind, philosophy….These are twin arts – parallel and complementary – by which their masters prepare the mind to become more intelligent and the body to become more serviceable, not separating sharply the two kinds of education, but using similar methods of instruction, exercise, and other forms of discipline.

Isocrates sees the arts of the body as complementing the arts of wisdom. And while he and Qoheleth may have disagreed about the nature of wisdom, both agree that mere Fun is an inadequate end for our minds or bodies to serve. And part of wisdom, as the rest of the biblical witness makes clear, entails disciplining our bodies and instructing them in the arts of work and joy.

Lastly, if having Fun is the highest concern, especially for youth sports, we instill in kids an appetite for Fun, rather than a love for learning. We adults turn into peddlers at a carnival. Cheap trinkets are the only prizes we have to give the contestants. What is the big deal about a love for learning? A love for learning, especially learning good things, brings wisdom and joy. A fun-at-all-costs approach, much like a win-at-all-costs approach, to youth sports becomes like the kind of education T.S. Eliot examines in his Notes Towards the Definition of Culture. In that work Eliot says, “Education has been taken up as an instrument for the realisation of social ideals.” The current social ideal that education (which includes athletics) demands of our youth is equality of outcome. Regardless who wins or loses, the spell of Fun can be chanted over the crowd, allowing those who believe in the ideal to fancy that everyone enjoyed the same outcome, the outcome being, Fun. Eliot goes on to remind us, “It would be a pity if we overlooked the possibilities of education [which includes sports] as a means of acquiring wisdom; if we belittled the acquisition of knowledge for the satisfaction of curiosity… and if we lost our respect for learning.”

This is a top-down effect. Adults shoulder the bulk of the burden here. Kids will cheer for fun. They will complain about not getting their way. They will complain about losing. They will want to buckle and run from difficult and tense situations. It is the adults’ responsibility to train them up, to teach and demonstrate the proper form one’s character should take. Adults who quote “It’s all for fun,” “Let’s make sure we have fun,” “Remember, above all else, to have fun,” are guilty of casting a witchcraft spell over the younger generation. Such incantations turn Fun into an idol. And idols can never be idyllic. Yet, such idolatry inhabits secular and Christian circles. We cannot go along spellbound, for such a path leads away from a rich taxonomy of goods that ought to orient the fun of playing a sport: joy, wisdom, and a love of learning.

Chesterton on a Desert Island

Bar Jester’s Writing Seminar; or, How To Write Like the Average...