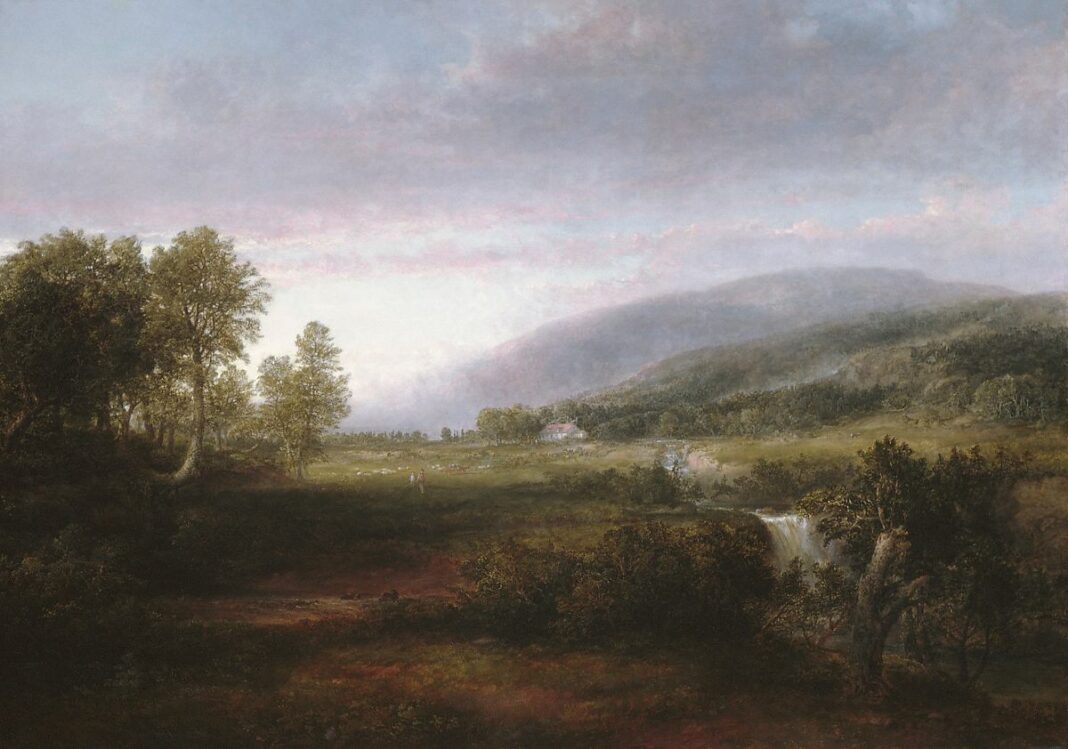 Rockford, IL. Over a half century ago and in reaction to the assassination of Martin Luther King, Jr., a young Wendell Berry penned a very personal essay on race relations in American history entitled The Hidden Wound. His central argument was that the institution of black slavery had fractured and distorted American whites as well as blacks, if in different ways. Berry has now returned to the question of America’s racial past in the much larger and more ambitious volume The Need to Be Whole: Patriotism and the History of Prejudice.

As expected, Berry cuts his own path of historical interpretation. On the one hand, he accepts in a way the key premise of The New York Times’s “1619 Project” which places black slavery and its consequences at the very center of American consciousness and history. However, he gives this focus a twist, locating the primal American sin in a somewhat different place. On the other hand, he agrees in a manner with the report of the presidential “1776 Commission,” released in the waning days of the Donald Trump administration, holding that white racism is not the major source of national woes. All the same, he condemns the American project for another sort of systemic subversion of its ideals of both liberty and equality.

The radical and disorienting theme of this book grows out of Berry’s accounts of two 19th century conversations. The first was between Winfield Scott and Robert E. Lee, where the former (on behalf of President Abraham Lincoln) offered the latter command of the Union army that would go to suppress secessionist movements in the South. A villain in the “1619” narrative and scrupulously ignored by the “1776” report, Lee in Berry’s telling becomes the absolutely central figure in understanding the tragic meaning of the American Civil War and its legacy. Declining the offer, Lee of Virginia explained: “I cannot raise my hand against my birthplace, my home, my children.” Berry holds that as no other prominent person of that time, Lee “embodied and suffered…the division between nation and country” and between “nationalism and patriotism” that is the true source of American failure.

Faced with the positive career move of a lifetime and personally deploring slavery (even if enjoying some of its benefits), Lee chose to stand with his family, “his people,” and his place, and took command instead of The Army of Northern Virginia. Moreover, the Confederate foot soldiers—most of whom owned no slaves—would also fight from a “love of their families and their little farms” against an invading army. Berry praises Lee’s choice here as “indispensable,” adding: “Just for a little while, and within too narrow limits, it was possible for an eminent white man to imagine and affirm as sacred the cultural inseparability of land and people.” Indeed, General Lee’s stance serves as Berry’s prime example of the authentic “Patriotism” found in this volume’s title, even while Lee’s loyalty was tragically marred by his land’s support for the institution of slavery.

The second conversation occurred forty years before. Calling it “essential” to the sense of his book, Berry reports on an 1820 exchange between the Southern apologist and politician John C. Calhoun and future President John Quincy Adams, as recounted in the latter’s diary. During a walk together, Calhoun praised Adams’s principles regarding free labor as “just and noble.” However, he added, in “the Southern Country…they were always understood as applying only to white men.” Hard domestic and manual labor was reserved to black slaves, an approach that was actually “the best guarantee to equality among the whites.” Adams denounced “this confounding of the ideas of servitude and labor,” this “perverted sentiment…mistaking labor for slavery and dominion for Freedom,” as a terrible consequence of slavery.

Adams indirectly affirmed here the immense value to American democracy of the simple freemen who toiled for subsistence on their own family farms or in their own shops. Berry argues, though, that “Calhoun’s values” have in fact won out in America. Success today means to go to the university and so be lifted above the “mind numbing” work of the body and the hands, no matter who gets hurt by the individual’s climb upward. Bluntly put: “We all, black and white together, [now] want to be John C. Calhoun,” leaving the hard and essential work to lesser men and women.

Behind these shocking conclusions lies Berry’s philosophical commitment to Agrarianism, which in some ways takes firmer form in this volume than in his dozens of earlier books. As he writes: “However the histories of our two races have differed and diverged, I think they converge upon the theme of agrarianism.” Blacks and whites once shared a common “land hunger,” a desire to own productive property—farmland, orchards, forests, and ponds—as the way to avoid enslavement and to secure freedom and independence. After the Civil War, the first desire and hope among freed slaves was to own land, as articulated in the promise of “40 acres and a mule.” The right to vote was secondary to this quest for the true liberty of basic self-sufficiency. And yet the effort failed. The truly destructive prejudices in American life, Berry concludes, proved to be against the “small farmers” of all races and against “community life itself.”

Berry also notes the great irony found among contemporary Americans who demand the freedom, autonomy or “self-determination” of the individual. By the measure of what they could actually do for themselves, these “are surely the most helpless people who have ever lived,” caught now in a new and improved form of industrialized slavery, while clinging desperately to illusions of freedom.

Berry reports that he has worked for decades to build “an agrarian indictment of the industrial destruction of the land and of its natural and human life.” Returning to the Civil War, Berry insists that those who were and are troubled by the way that legalized slavery corrupted Southern patriotism should be “equally troubled” by the Northern side which, through rapid industrialization, “attached the expendability of soldiers to all working people, of whatever race,” treating everyone as “eventually replaceable by machines.”

In his own time, Berry says that he feels “against the agribusiness corporations, the chain stores, and the developers something like the resentment that the people of the South felt against the northern invaders.” Berry laments especially the near-disappearance of black farmers from the Southern states and elsewhere, victims of the “get big or get out” policy of the U.S. Department of Agriculture since the 1940s. The consequences were especially harsh for blacks primarily because their farms tended to be smaller or on more marginal land; race prejudice was part of a much broader set of policies that hurt all small farms.

In these arguments, Berry also reconnects with the twelve Southern Agrarians of yore who produced the 1930 volume I’ll Take My Stand: The South and the Agrarian Tradition. Early in his writings, he distanced himself from this volume, objecting to the “condescension,” the “false mythology,” and the “spurious piety” of the coauthors’ regionalism. He also denounced the chapter in that volume by novelist Robert Penn Warren which defended the prevailing Southern practice of formal racial segregation in schools and other public accommodations. On this latter point Berry has remained strong and consistent.

However, he otherwise slowly made his peace with his predecessor agrarians. In 1999, he especially praised the Twelve’s “Statement of Principles”: “I know of no criticism of industrial assumptions that can equal it in clarity, economy, and eloquence.” Virtually alone at the time, he added, this band of writers understood “the importance of the local.” In The Need to Be Whole, Berry draws fairly extensively on the thoughts of the agrarian poet and biographer Allen Tate, including the latter’s understanding of General Lee. Berry’s discussion of white Southern smallholders before, during, and after the Civil War also parallels the work of Frank Owsley. In his chapter for the 1930 volume, this historian praised the Southern yeomanry for whom farming was a way of life rooted in production for use. “The houses were homes,” he wrote, “where families lived sufficient and complete within themselves, working together and fighting together.”

So, what should now be done? Berry insists that race prejudice and the sufferings attached to it should not be seen as special and isolated problems. Rather, they are aspects of a greater tragedy involving the destruction of land and human community, which has left Americans as a scattered, uprooted and unhealthy people.

The Agrarian tradition, he holds, offers better ways forward. Among virtually all races and healthy cultures, it has been understood that the land “must belong to people who love it” and who are “culturally prepared and instructed to use it lovingly.” Accordingly, farm ownership and taxation policies should favor smallholders who reside and work on their land. Farm policies that favor agribusiness should be scrapped. Drawing on the lessons of the old Burley Tobacco program, Berry also favors production controls, limits on farm consolidation, and parity in pricing.

More broadly, he offers a seemingly modest guideline that actually captures the essence of agrarianism and is applicable to all Americans, urban or rural, black, white, or other, and in any time: “You must make yourself as much a producer and provider and as little a mere consumer as you can.” Put another way, continuously search for ways to reduce your need for cash, turning instead to home production for use.

And build communities. No one can be whole alone; no one can be free alone. Rather, Berry holds that “[t]o be whole and free is…to be at home in a place and in a community where one knows and is known,” and where its boundaries include soils, waters, plants, and animals. Facing Big Tech’s refined version of industrial slavery, Wendell Berry’s guiding commitment remains simple and pure: to homemaking. Such work defines authentic patriotism. In his words, “I want to gather together the precious remnants and carry them home.”

Last Will and Sacrament