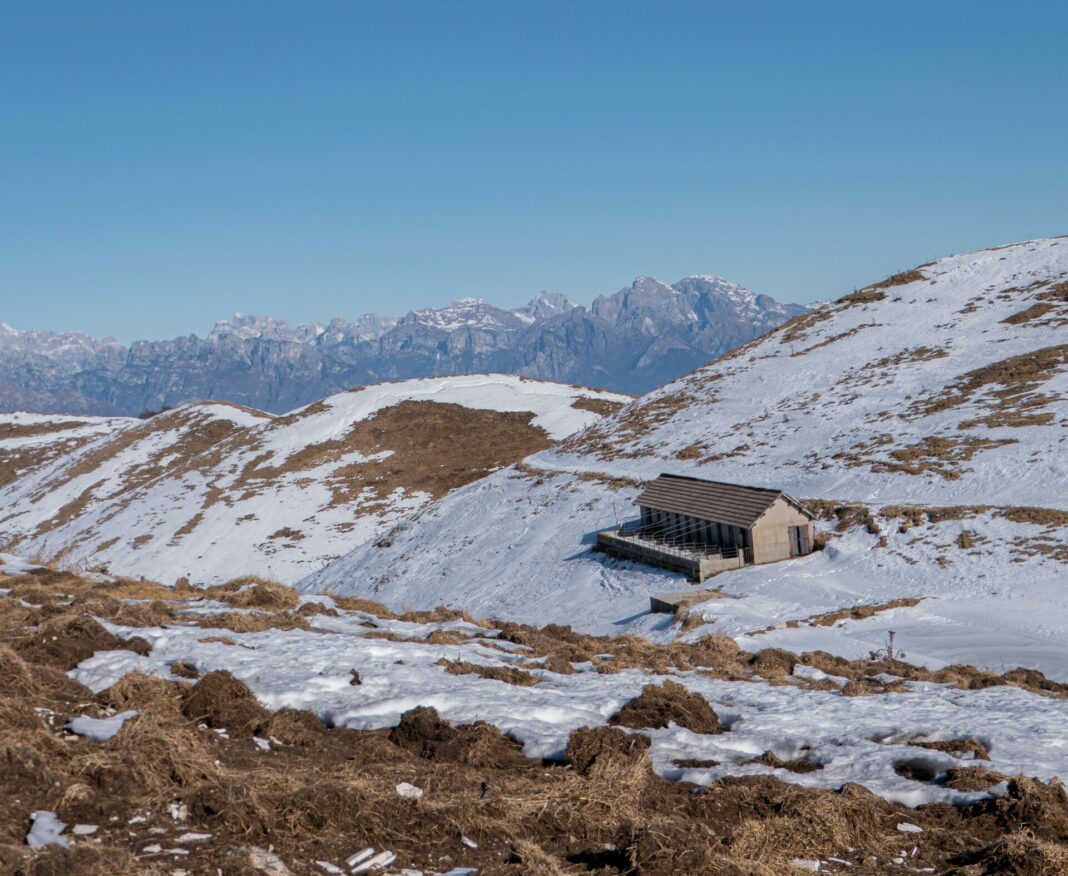 North Yorkshire, England. Tradition is not the past, necessarily, but that which does not pass. A tradition does not have to be old, but it should be regular and come with a sense of ritual. Above all, it has to be upheld.

Our most enduring traditions are defined by the seasons. Society’s long move from the country to the city may have desacralized their meaning, but for so long has man’s festive calendar been defined by our ecological needs and vulnerabilities that it is hard to imagine us ever dropping our seasonal traditions. Some are embedded remnants of earlier religions or the inheritance of cultures long gone. Some, however, are expressions of a personal relationship, idiosyncratic rituals that structure an individual’s life.

My tradition of making liquor, spirits flavoured with foraged fruit, is very much the latter. Four years in and I am still terrible. My first hedgerow gin was as rough as the swelling Adriatic. Last year’s plum vodka was so strong I thought my lips would never walk again. A friend described this year’s damson brandy as “agricultural.” As a farmer, he would know. Neither by kindness nor by threats can I make it drinkable, yet every year I arrive at the same bushes, to forage for the same fruit, to go through the same process. And no matter how bad, my first taste is always my favourite winter tradition.

Making liquors—particularly sloe gin—is a civic tradition of the stout yeoman variety. It has been the preserve of the countryside, of someone “who knows a good spot.” And it is not just the tart-sweetness that slips down like red silk that is so enjoyable. Liquors put me in contact with a countryside that is more than picturesque, but one that is productive, seasonal, transitory. They are Shakespeare’s “pleasures of the fleeting year,” bottled and savoured. While I am picking the fruit and testing its firmness, I am thinking of the warmth it will bring me in winter. When I am drinking it, I often look out over the back garden to the hedge I picked it from, remembering the rich vivacity of the summer. If the phrase “communing with nature” did not have “spiritual but not religious” energy, it would be the perfect phrase for such a feeling.

The process has been, inevitably, industrialised. With the neo-Gin Craze of the last decade has come a commensurate explosion in mass produced liquors. No longer the preserve of the shooting party, they are drunk by those in search of the most fashionable intoxication, the eye-opener as floating signifier. In mass production, of course, they lose their essential appeal. As with everything that is quintessentially English, the charm lies in the amateurishness. Certainly some of this skepticism is snobbery on my part—those of us who embrace the countryside from without do it from an inherent distaste for the popular.

Sloe gin was the first to become popular, and the combination of the base ingredients could only be an English product. Gin, though of course a Dutch spirit imported along with the Glorious Revolution, became immensely popular when the Government imposed a heavy duty on imported spirits whilst also allowing unlisted gin production to create a market for barley of too low quality to be used to brew beer. The Gin Craze that followed need not be explained here, but so poor quality was the gin that flavourings were needed. Turpentine (for wooded notes), sugar (the now-disappeared Old Tom), and sloes were added, as well as a process of distilling with sulphuric acid, which produced a sweeter spirit.

Of course the final ingredient is more sugar, produced via industrial slavery on the plantations of the West Indies. The horrors are both too well known and too indescribable to be done justice here.

The Gin Craze coincided with the beginning of the agglomeration of the English countryside into huge private estates through the Enclosure Acts. Driven by the Agricultural Revolution, in the space of two centuries over 5,000 Enclosure Acts were passed, covering 2,800,000 hectares of English land. Enclosure meant that common land—which often had little agricultural value but was used heavily as pasture by the landless—was physically enclosed and added to estates. The landless would go on to move into the cities, forming the backbone of the Industrial Revolution’s workforce, whilst the former “Open Field” system was slowly phased out. This system, in which a tenant might have several small strips of land within the holdings of a manor, required larger fields and worked on crop rotation. The accretion saw the open fields subdivided into smaller fields, better suited to new farming techniques like the Norfolk Four-Course.

Most of this subdivision and enclosure was done by hedging. Blackthorn is not only thick and thorny, providing a perfect natural barrier, it is also quick-growing, able to thrive in most soils and providing shelter to livestock. It was the perfect tool for the job and hundreds of thousands of miles of hedges were laid which, every winter, provided a rich harvest of sloes to those it had displaced. Since then it has become an English tradition to pick sloes, almost as revenge for the rights and land lost to the Enclosure Acts.

The heyday of the huge estate was not to last long. From the 20th century there began a precipitous decline, a cultural tragedy in which spectacular houses were lost as a result of the aristocratic death rate of the First World War, the requisition policies of the Second, luckless or feckless scions, and a taxation system that sought to essentially nationalise the aristocracy’s assets through Lloyd George’s Acceptance in Lieu scheme. Almost one in six country houses were demolished during this century.

Along with this destruction came a disaggregation of the estates. Owners needed capital to finance their houses; before the advent of estate tourism, the easiest financing solution was simply to sell off land. The Long Depression of 1873-1896 affected agriculture in particular; the loss of income from the surrounding estates was another important factor in the decline of the English stately home. As Oscar Wilde wrote in 1895’s The Importance of Being Earnest, “land has ceased to be either a profit or a pleasure.”

The accretion—and subsequent subdivision—of land had made Britain a nation of small fields. The smaller farmers who, for the most part, bought up the land could not make the system work. The rural depopulation bought about first by the Enclosure Acts, then by the Industrial Revolution, then by the Long Depression, had left them unable to find the necessary agricultural workers. Their inability to produce enough to feed the nation meant that Britain had to keep tariffs down and the ports open to imported agricultural goods, which further undercut the farms.

The pattern of struggling domestic farmers and cheap imports continued until the Second World War, which exposed what a fundamental strategic weakness it was to not be able to produce enough food to sustain the domestic population. As a matter of national security, farming was modernised, industrialised, intensified. The government brought in a massive programme of subsidies, which continue to this day. They included incentives to remove the hedgerows, as large fields are deemed more efficient. This paroxysm of ecological sabotage was further compounded by intensive farming techniques like spraying insecticides, straw and stubble burning, and simple neglect. Hedgerow planting has only recently overtaken the loss rate.

But here the metaphor is revealed, for it isn’t just the hedgerows we are losing. Smaller farmers are more susceptible to the profit motive, yet find it harder to make money. Their children, understandably, often have little interest in continuing to steward the land for a pittance. Their sundered fields, particularly those bordering cities, towns, and villages are ripe for development. Last year, the number of homes built was equivalent to a town the size of Skipton. They were, for the most part, built not in new sites, or in the high-density housing that Britain’s failing high streets so desperately need to survive, but as needlessly sprawling, neo-suburban red brick incisions into the countryside. As Wordsworth might have said, “Is then no nook of English ground secure from the rash assault of building horizontally?”

Every generation believes what is has grown up with is “nature.” Bifurcating a little more of the countryside cannot hurt. Yet each generation leaves less and less. We do not live long enough to see the cumulative ecological effects of our actions. Since the Second World War there is barely a single species that could be called “thriving.” A few Red Kites smattered around the country is pretty thin gruel when compared to the loss of the once-rich biodiversity of our own backyards. Like the hedgerows, we cannot exist without roots. Our roots are withering. They will need care, nourishment, protection.

My yearly action of foraging—although that is a little grandiose term for filling a small bag with berries—in the lambent glow of autumn’s dwindling sun fills me with joy. But on winter nights, when the damson vodka makes my lips tremble and sing, I am filled with a sad pathos for the future. I am frightened that with each passing generation, the number of us for whom the countryside is something to actively engage with dwindles. The number for whom it is something to passively engage with—to occasionally visit, as one would a tourist site—increases. There may be a way back for English nature if we find more ways to tend its fragile health. But if there isn’t, at least it gave its life for a good hangover.

The Pleasures of a Liturgical Calendar of Reading