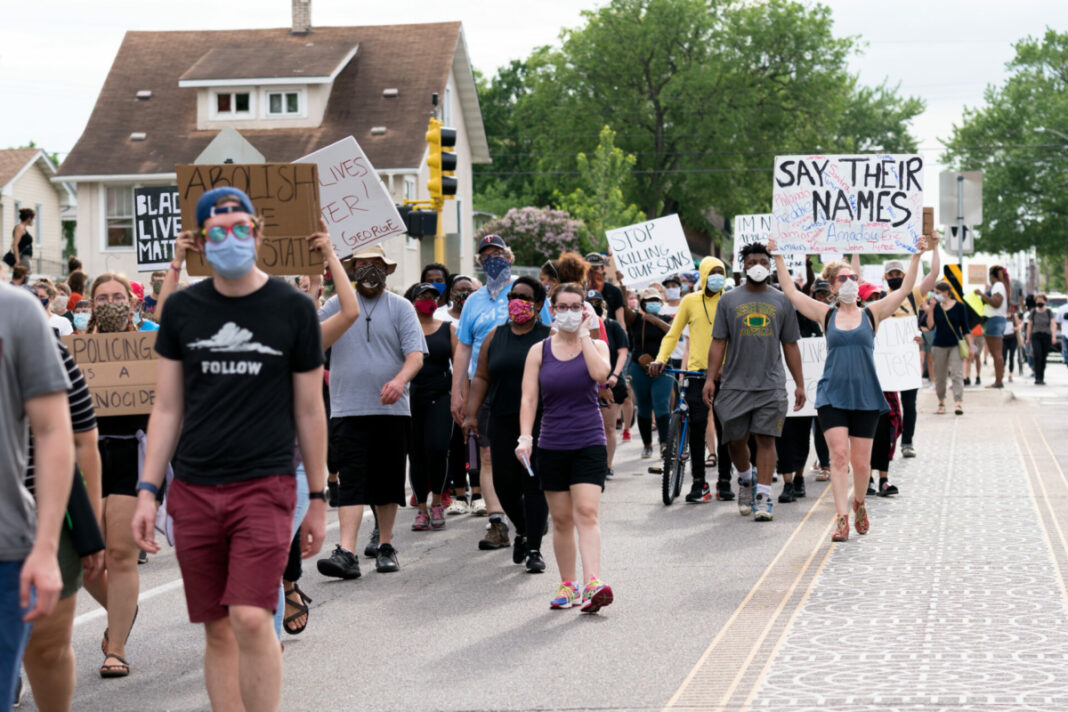 St. Paul, MN. I often drive through the square commemorating the 2020 murder of George Floyd in Minneapolis on my way home from the school where I help out. Until recently, it bore the slogan, “Kill Your Inner Cop.” Neighborhood lawns are planted with signs reading “No Justice, No Peace” and “No Justice, No Streets.” Over the last couple of years, I’ve started to wonder if the streets would be safe even if the social justice activists got everything they wanted. Let’s say they got reparations for slavery, cultural acceptance of gender self-determination, free access to the internet, and an end to police funding, fossil fuels, private schools, and support for Israel. I could go on, but these positions, drawn from the Movement for Black Lives platforms and statements, can suffice.

I don’t think this would satisfy them at all. Since the ‘60s, I’ve experienced or witnessed many iterations of outrage followed by institutional changes tailored to answer the activists’ demands. But after a short period of quiet, the rage begins again, often claiming that nothing is different. What is different in the last fifteen years, however, is that activists on the Right have now become a mirror image of their leftist adversaries. They have similar levels of outrage, similar willingness to justify violence, and similar lists of grievances. And they wouldn’t be satisfied by victory either. As Jonah Goldberg wrote in October, “The core problem with American politics is that a large number of people have become convinced that elections aren’t for eliminating problem, they’re for eliminating ‘our enemies.’” And it’s not just elections. It’s academia, the media, and the institutions of civil society—sometimes reaching into our neighborhoods and families. Replace the first word in one of Emily Dickinson’s great poems with its antonym, and this is what we’re seeing:

How can we understand this situation? The symptoms alone do not explain it—not the tolerance for criminal activity by one’s perceived allies, not the spread of disinformation, and not the polarization that social media encourages. How often have you and a friend lamented these symptoms, regretfully shaken your head, and parted with wishes for more moderate leaders? Pardon the clichéd responses, but clichés they are. Identifying the symptoms and responding in this way fails to comprehend or address our situation.

My claim is that the identity of activists, whether from the left or right, now depends more upon their rivalry with the other than upon the goals and values they profess. Defeat ratifies their identity more clearly than success, for success would mean they have no one to blame for their failures. In short, they perceive their own righteousness most clearly by their opposition to the other side. The enjoyment of such justice as we can actually experience in our local community means little to nothing – at least, I don’t see them enjoying much of anything. Rather, I see the activist Left searching for a historian or filmmaker to cancel, regardless of how baseless the charge. I see the activist Right cataloguing “libs of tiktok” in order to “own” them, however marginal or irrelevant the example. How different this is from the Civil Rights movement, with its discipline, self-examination, and clear policy goals! How different it is from Reagan Republicanism, with its intellectual foundations in a rich conservative mélange and its goals of defeating Communism and corrosive inflation.

The rivalry we’re experiencing goes deeper than symptoms, political principles, and even the need for responsive, wise leaders. Indeed, it may bypass principles and wisdom altogether. But to explain it, I need the help of anthropologist and literary critic René Girard (1923-2015), whose influence has often come to FPR’s attention. Girard taught that culture itself inevitably produces rivalry because culture arises from imitation. Nations and companies imitate and compete, and the more advanced ones succeed. As an individual, you imitate a teacher, a coach, a boss, or the style of a boy or girl in your class. But in pursuing various activities – your school subject, sport, job, or prospective love interest – you inevitably come to see others as rivals. If you can share your success with teammates or colleagues, the rivalry may be secondary. Your class, team, or company may flourish. But the position of starting quarterback cannot be shared. There’s only one CEO, and (let us hope) only one girlfriend. Rivalry is therefore inevitable. In fact, the rivalry may take over your energies entirely. Defeating your rivals may displace your desire to excel in your sport or your vocation. Jealousy of a rival may overshadow even your desire to please your beloved.

Girard wrote that this “mimetic desire,” as he termed it, tends toward violence if the individual isn’t checked by some other powerful influence—usually a religious, legal, or moral one. But although Girard brilliantly explains “Thou shalt not covet” as the most profound of all of the commandments concerning our neighbor, his major focus is not on the individual. Rather, he is most concerned with violence in society more generally. Girard’s insight is that social peace rests upon widely received institutions that re-direct the violence that arises from mimetic desire. In sports, the rivalry is limited by the rules, and something is badly wrong if actual violence spills into the community. In the justice system, the judge and jury deliver the socially acceptable equivalent of a violent response to the criminal: we accept that the punishment fits the crime, thus preventing (or ending) a cycle of revenge.

However, if a group is “blocked or obstructed as they [pursue their desire for] some specific object of power, prestige, or property,” the system begins to break down, according to Girard, as James G. Williams writes in the foreword to I See Satan Fall like Lightning. This obstacle, real or imagined, intensifies their rivalry with the obstructing group. They are outraged by their rival’s bad behavior and injustice. They become fascinated, even obsessed with the other, trolling their words and deeds as we would say today and always on the lookout for scandal.

At some point, “it is not enough for social bonds to be loosened,” Girard writes, “it must be destroyed.” That helps explain why the 2020 rioters and the writers of the 1619 Project must claim that white supremacy is at the heart of the American experiment: that’s the warrant they need to justify their hatred of the system. It also helps explain why the defenders of Donald Trump downplay or overlook the violence of the 2021 rioters on January 6: to justify their efforts to destroy the constitutional order, they need rivals who are seeking to destroy America altogether. In both cases, rivalry with the other side becomes more essential to their identity than their vision of justice.

Girard goes on to say that a scapegoat, a pure victim on which the sins of the entire community can be placed, can bring the various sides together – at least for a time. I see George Floyd largely fulfilling this role for the progressive side of the debate. He was the victim of a horrific murder. Nothing can justify what happened to him. But the attempts to portray him as a pure, admirable man, capable of bearing the sins of white supremacy, are fanciful and delusional. It unfairly forces him into a role—a scapegoat—which he simply cannot fulfill for America as a whole. And by the way, the black churches I’m familiar with do not need a recent victim to motivate their followers to do justice and love kindness. They are equally concerned with the victims of last year’s record-breaking shootings, crime sprees, and murders in the Twin Cities. They’ve taken back corners from criminals. They’ve opened their doors to the community during a pandemic. But their identity comes from an entirely different scapegoat – namely, Jesus Christ.

This brings me to the most evangelical aspect of Girard’s work: “The cross of Christ is the sign of salvation, which is revealed as the overcoming of mimetic desire and violence through the nonviolence of love and forgiveness.” By accepting the violence of the crowd and by forgiving us for the sin that set him on the cross, Jesus ends the cycle of rivalry. Further, he makes it possible for us to replace its cause, “mimetic desire,” with love. Reconciliation doesn’t arise when rivals listen to each other more. Becoming more open-minded doesn’t establish it, nor do appeals to moderation. Reconciliation arises from an act of forgiveness that stops the mimetic cycle altogether. And if you’ve noticed, I’ve replaced “them” with “us.” We must recognize that we put him there. All of us, not just our rivals. Conservatives who refuse to acknowledge their role in social problems are part of the problem. So are progressives.

Maybe a call to faith is futile. Maybe belief is out of bounds. And yet, other responses to our rivalries often rest on some kind of faith as well. Many of my neighbors display signs proclaiming, “in this house we believe….” followed by a creed of progressive-leaning claims. Surely they believe that justice would flow from accepting these claims and their implications. Similarly secular adherents of an older humanism, may they rest in peace, held to a version of Matthew Arnold’s liberal faith. In “The Function of Criticism at the Present Time” he called for faith in a self-critical, “disinterested love of a free play of mind on all subjects,” which he believed could wrest us from Philistinism and lead to cultural perfection. David Foster Wallace issued the call in even more direct terms:

There is no such thing as not worshipping. Everybody worships. The only choice we get is what to worship. And the compelling reason for maybe choosing some sort of god or spiritual-type thing to worship…is that pretty much anything else you worship will eat you alive.

But Girard sees what’s missing from these examples: namely, our need to accept sacrificial forgiveness as our own model for reconciliation because we too harbor mimetic desires and rivalries. As Cynthia Haven wrote in a 2019 retrospective on Girard, “It is we that are the persecutors, while imagining ourselves to be the victims.” As peaceful as they are, the Amish recognize that they are forgiven sinners, which was their basis for forgiving the murderer of five of their children in 2006 and welcoming the perpetrator’s mother into their community. The members of the Emanuel A.M.E. church in Charleston recognize this too, and they forgave Dylann Roof for his 2015 murder of nine of their members.

Many of the greatest political thinkers taught that the pursuit of principle must be tempered by practical wisdom – prudence. But even more profound than prudence is the insight that comes at the end of Lincoln’s Second Inaugural. Although he is on the cusp of military victory, he avoids the language of rivalry almost entirely. Nearly four years into the bloodiest conflict in our history, he affirms that “’the judgments of the Lord are true and righteous altogether.’” And looking to that conflict’s end, he concludes with hope for “a just and lasting peace among ourselves and all nations.” The “firmness in the right” that he urges is framed “[w]ith malice toward none with charity for all.” He urges rivalry to end, but Lincoln’s language is not that of moderation. It is the voice of reconciliation.

Daniel Ritchie is grateful to Peter Leithart for his insights regarding this essay.

The Death of bin Laden: On Violence and Civil Religion