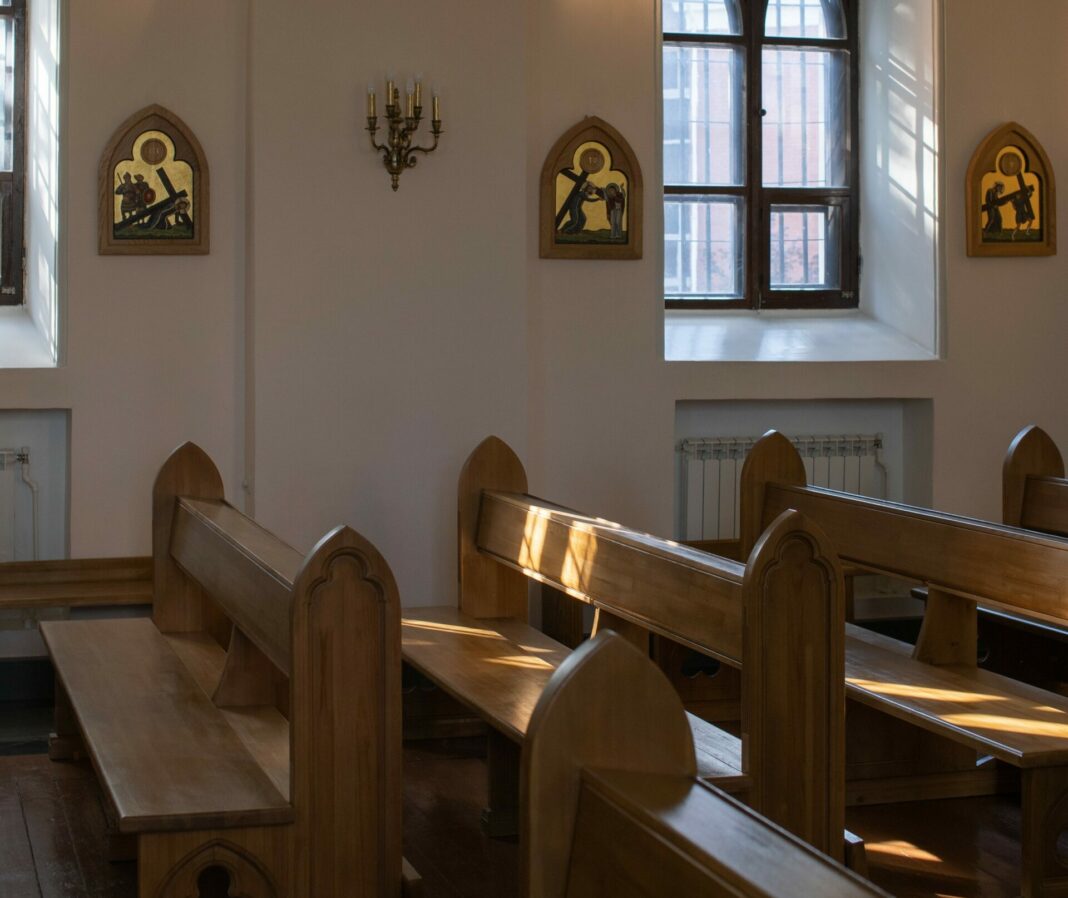 Princeton, WV. The two diligent old ladies sat low in their church pew. One lady’s figure—blond hair, tanned skin, and upright shoulders—evoked the Academy Awards. The other woman’s figure had softer shoulders curved slightly forward; her hair, still brown, was worn close to her head. My wife, Rebecca, knew both ladies for more years than I knew them, but by the time I became their pew-neighbor, I’d been an active member of our congregation for more than a decade and knew almost nothing about either one of the women, except for their names. The bulk of our exchanges entailed generic expressions such as “Good morning” or “Hello.” Given my poor engagement with them, the likelihood that the two elderly ladies would fade from my memory seemed inevitable.

My reliance on rudimentary phrases stemmed not from ill-will but from uncertainty. I didn’t know what to say to them. Because uncertainty breeds anxiety, I limited my interactions. Yet the life of safety, especially within a local assembly of believers, is not the life of human flourishing.

Of course solitude and quiet foster contemplation, the highest form being communion with God. To talk to everyone all the time keeps one away from contemplation and, worse, from communion with God. However, though Jesus kept solitary and quiet spaces to commune with God, the Son of Man dwelt among us mortals; he indwelled our flesh and broke bread with us. The example demonstrated by Jesus, which aligned with the greatest commandments–to love God and love our neighbor–caused me to realize my recalcitrant excuses for not talking with my pew-neighbors Jackie or Frances could no longer be given quarter.

Communion comes at a price. Rather than taking time among better known friends and acquaintances during our church’s mid-service reprieve, I brought my coffee back to the auditorium and sat on my pew, immediately behind the pew occupied by Jackie and Frances.

When I first joined them for the mid-service break, I noticed their snack collection was like a boutique grocery. The ladies offered me samples of each snack and included their encouragement-as-a-command to “take as much as you want.”

Once food was shared, Jackie and Frances proved to be good talkers: they listened and responded freely. In other words, they knew how to converse. They delivered no monologues until prompted. Eventually, prompting monologues from the elderly women turned out to be a far richer endeavor than deliberating over what I might say. A good question or two provoked each lady to speak from the deep cisterns carved out in her soul from a long life. Sometimes their responses dovetailed, so Jackie wove into France’s remarks, or Frances wove into something Jackie said. It was like a tutorial delivered by two voices in harmony. By way of their words, the ladies crafted what felt like a thick quilt, gleaming with colors and giving off warmth I could feel in my face and chest. Perhaps it was friendship taking form among us. On my part, it certainly included much admiration.

Communion brings its rewards: stories of their childhoods on hillside farms, of marriages that did not take or that took years to find peace, of knives thrown across kitchens, of car windows smashed out with a stick, of clumsily helping an injured spouse off the kitchen floor, of child raising, of clothing fashions past and present, of schoolhouse squabbles, of first occupations outside their homes, of moves or travels away from their home state, of funerals, of walking habits, reading habits, eating habits.

During one of our mid-service conversations, the ladies recounted an outing they took the previous week to see their childhood homesteads. Jackie’s place held a few original signs of life. The main house still stood three stories tall, but most of the property had been altered, and not for the better.

“We had a good barn and sheds. They took them down. They even took down the windmill. And the apple orchard—that’s gone to pot,” Jackie said. “Even the house didn’t look good.”

The girlhood home of Frances had nothing to show that Frances’s family of sixteen had ever lived on the land, let alone had ever lived.

“All grown up with nobody there. We had 300 acres. You wouldn’t know it now,” Frances said.

And with that, both ladies went silent, as if overtaken by the images they recounted; witnessing absence where once life teemed and shimmered, neither woman spoke for a moment.

In an effort of solidarity, I only said, “I am sorry,” to which they nodded, and we all three sat in a mist of dispiritedness.

Their experience brought to mind the tone and idea of Robert Frost’s poem “The Census-Taker.” In that work, a census taker comes across an abandoned property on which sits a desolate home. The agent imagines people moving through the house as if they still lived there, and he counts “nine I had no right to count.” But the census taker also admits that “the people that had loudly passed the door / Were people to the ear but not to the eye.” Nevertheless, sorrow besets the agent. Not because he can’t complete his job, not because tax-payers can’t be accounted for; rather, the census taker grieves because this place that once held human bodies and lives has become desolate:

It is as the book of Ecclesiastes, written by Quohelth, says: one generation passes away; another comes to also pass away; and on and on it goes. From one age to the next, most, if not all, dies and is forgotten. If not the land or architecture or events, the actual humans who worked the land, built the structures, experienced the events. This is a sobering reality.

Even those who don’t share a Christian theology search for some way of coming to terms with death. Joseph Campbell, for instance, concludes The Hero With a Thousand Faces, a book with valid insights for storytelling, with a declaration that the human soul, the source of dreams, connects the individual to the universe:

The image of man within is not to be confounded with the garments…. The aim is…to realize the one is, that essence; then one is free to wander as the essence in the world. Furthermore: the world too is of that essence. The essence of oneself and the essence of the words: these two are one…. Wherever the hero may wander, whatever he may do, his is ever in the presence of his own essence…. The individual has lost himself in the law and been reborn in identity with the whole meaning of the universe. For Him, by Him, the world was made.

On the other end of the spectrum, Meditations, by Marcus Aurelius, states that we did not compose ourselves. A god made us, and we are to live according to that divine being’s will; we must do what we can while we are alive on earth. When the time comes, go with fortitude to the grave. In Book IV of Meditations, Aurelius even says “go over all those you have known yourself, one after the other: one man follows a friend’s funeral and is then laid out himself, then another follows him—and all in a brief space of time. The conclusion of this? You should always look on human life as short and cheap.” Human life is short compared to eternity. The body, once dead, certainly goes the way of corruption, thus even the most handsome or beautiful of people takes on a grotesque form. The stoic’s humility and courage in the face of death are admirable, at least in part. When Aurelius concludes his work, in Book XII, he says, “Completion is determined by that being who caused first your composition and now your dissolution. You have no part in either causation. Go then in peace: the god who lets you go is at peace with you.”

For Campbell, our beginning and our end is determined by us. We are The Divine. We go on living in the spiritual consciousness of the universe. For Aurelius, a god began us and will bring about our end. We answer to a divine being, whoever it may be. For Qoheleth, our entire existence resides in Jehovah God, and our submission to Jehovah, which produces good works, allows us to be at peace with Him. Qoheleth reminds us that all life under the sun is vanity, which is why he enjoins us to remember the Creator.

Jackie and Frances testified to a trouble their forefathers knew. It is a trouble that visits us all: our fate is to die and be forgotten. Tying ourselves to one another and to life can diminish that trouble’s force, but kingdoms and cultures and homes rise and fall. Being willingly bound in devotion to the Creator redeems that trouble forever, for that kingdom and that culture and that home know no end. Jackie and Frances, my wife and I, and others we love are willingly bound up in this kingdom.

Meditating on the old ladies’ story caused them to take on a stone-like spirit before my mind’s eye, as if the two women were related to the Rock of Ages. Jackie’s narrow, resolute shoulders and Frances’ soft frame do not tower in their church pew, but they glow like lively stones, precious stones, no longer set to go the way of death and forgetfulness; rather, to go unto their Creator.