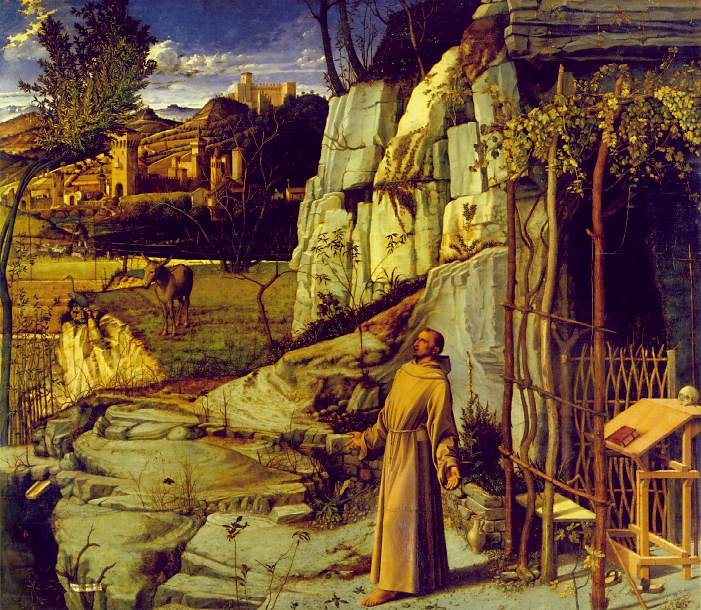 Mt. Airy, Philadelphia. Pope Benedict has recently gained a bit of credit with world media for emphasizing the urgency of addressing the environmental devastation we have wrought. This (combined with installing solar panels to make Vatican City the world’s only “carbon-neutral” sovereign state) has earned him the title “the Green Pope.” While journalists usually snip sound bites out of papal speeches for their own sensationalist purposes, so they can misrepresent their careful author as outrageous and inflammatory, here they employ their usual habits to make him more acceptable to the cosmopolitan liberal consensus. Consider the PBS coverage of Benedict’s speech to the UN last year:

He also spoke about the negative effects of globalization, especially experienced in Africa and other desperately poor parts of the world; scientific research and technological advances that, while they can bring enormous developments, can also lead, he claimed, to clear violations of “the order of creation, to the point where not only is the sacred character of life contradicted, but the human person and the family are robbed of their natural identity.” He also mentioned the necessity of swift, coordinated, and effective international action to preserve the environment. Overall, this was an uncontroversial—yet no less welcome for that—speech. It highlighted both Benedict and the Church’s internationalist credentials and went some way to gainsaying the idea that he is a dyed-in-the-wool conservative.

As PBS is there to remind us, you can’t be altogether conservative if you’re not in favor of allowing globalizing multinationals to devastate the earth.

Of course, the carbon credits the pope earns don’t make the rest of his teaching any more palatable. The Catholic expert voices consulted in a Newsweek piece on papal environmentalism make a well-meaning effort to point out the consistency of the papal message across the board. In the end, however, I don’t think they offer very helpful formulations. Lucia Silecchia of Catholic University observes

When you have an issue getting so much attention, there are a lot of voices talking about it. Benedict knows that and he wanted a seat at the table…. He saw this as a way to push the values of the church in a new context.

And Raymond Arroyo of EWTN insists

It’s all the same argument. I don’t think he loves the earth as an issue in itself, but he sees it as one thing of many that the creator designed. He’s just emphasizing it.

The truth is, however, that Benedict understands our loving and responsible relationship to God’s created earth as central to our human existence as created beings, and as fundamental to the integrity of Catholic teaching. The depth of this theme in his thought (which seems to have received little emphasis from his admirers and interpreters) comes out forcefully in his 1981 Lenten homilies in Munich (published by Eerdmans as ‘In the Beginning’).

It becomes clear that we human beings are not bounded by the limits of our own little “I” but that we are part of the rhythm of the universe, that we too, so to speak, assimilate the heavenly rhythm and movement in our own bodies and thus, thanks to this interlinking, are fitted into the logic of the universe.

To understand clearly what he is saying here, it is crucial to note the reference to “the limits of our own little ‘I’.” As a student of Augustine, Benedict knows that self-enclosure is the essential form of sin. He also knows that the remedy for self-enclosure cannot be achieved purely “spiritually” by turning the soul to God, but involves the proper relation of love toward our human community and toward the created world—and that these are all fundamentally connected.

Exactly the same insight underlies his explanation, in The Spirit of the Liturgy, of the eastward orientation of the church building and the prayer of Christian worshippers. Praying to the east is “a fundamental expression of the Christian synthesis of cosmos and history.” Christian worship is not something that occurs within the walls of the church; it opens the worshippers to the whole integrated meaning of God’s creation and redemption of the world.

For all of humanity, the rising of the sun signals the return of light to the world after darkness, the dawning of new hopes and possibilities. Directing prayer to the place of the sun’s rising reminds us of the glorious creation we celebrate, the dawning of the world and time. But at the same time, when we look upon the sun as an image of Christ’s redeeming sacrifice, our bodily and emotional responses to the world and its rhythms become suffused with the significance of the redemption. The synthesis of the created cosmos and salvation history occurs viscerally in our oriented bodies.

A church not rightly oriented risks self-enclosure in two ways. Physically, it risks the enclosure of worship in the interior of its walls, losing mindfulness of its placement on the earth in relation to the cosmos and its emphasis on opening outward. But this physical enclosure has communal consequences: “The turning of the priest toward the people has turned the community into a self-enclosed circle.” Worship risks becoming a theater of personality rather than a turning-together and opening-outward of priest and people toward Creator and Redeemer. Thus Ratzinger asks:

Are we not interested in the cosmos any more? Are we today really hopelessly huddled in our own little circle? Is it not important, precisely today, to pray with the whole of creation?

But of course our right relationship to the created world is not primarily a matter of our bodily response to rhythms of sun and moon. Above all, it concerns our living on and from the earth. As Ratzinger emphasizes, the creation account in Genesis portrays humankind as originating from “God’s good earth.” He helpfully contrasts this account to the Babylonian story it is opposing itself to. According to the Babylonian Enuma Elish, the earth and humanity originate from the body and blood of the sinister dragon slain by the just god Marduk. According to Genesis, on the contrary, the earth and its inhabitants are created by God from nothing and recognized by God to be good. Humankind is united by its relationship to the earth: by originating from it, being sustained by its goodness, and returning to it.

It is common today to claim that this “disenchantment” of the earth accomplished by Biblical religion has destroyed reverence for nature, and the injunction in Genesis 1.28 to “subdue the earth” has led to our culture and economy of utilitarian exploitation. Ratzinger shows convincingly that these dire outcomes result, on the contrary, from modern rejections of core elements in the creation teaching. The model for subduing the earth is given in these terms: humanity has the responsibility to “till it and keep it” (Genesis 2.15). This is a model of good agrarian tending, not of exploiting to the breaking point the productive possibilities of “raw materials.” Ratzinger emphasizes that “the world is to be used for what it is capable of and for what it is called to, but not for what goes against it.”

“Keeping” does not mean keeping hold of as a juridical property, but rather maintaining and sustaining the natural productivity of the land for future generations. Thus in this context Ratzinger observes:

Past, present and future must encounter and penetrate one another in every human life. Our age is the first to experience that hideous narcissism that cuts itself off from both past and future and that is preoccupied exclusively with its own present.

But overcoming self-enclosure in the here and now involves the reminder of eternity. This brings us back to the seven-day cycle, for the Sabbath is supposed to be the day devoted to mindfulness of our origin in time from God’s eternal being and our ultimate eternal destiny. The demand for unceasingly expanding the limits of human productive powers destroys the rhythm of the week that revolves around the Sabbath day of rest, in which we enter into God’s peace.

In this connection, Ratzinger cites the judgment of the Israelites on their own exile. The people had failed to observe the requirements of the land to enjoy its Sabbath by periodically lying fallow. They had also failed to observe the requirement of the community to periodically return to a Sabbath rest from accumulation (by observing distributist principles of land ownership and readjusting properties accordingly). Because of this, the people were removed from the land, so that the land “enjoyed its Sabbaths” (2 Chronicles 36.21). Ratzinger notes (clearly with our present condition in mind) that the people

It may turn out that our “downturn” is really at bottom a sign of collapse of the global forward march toward enslaving the world to frenzied activity. As Pope Benedict observed at the celebration of World Youth Day in 2008:

Perhaps reluctantly we come to acknowledge that there are also scars which mark the surface of our earth: erosion, deforestation, the squandering of the world’s mineral and ocean resources in order to fuel an insatiable consumption.

The insatiable appetite for consumption (whipped up by the insatiable appetite to profit from production) enslaves us to activity that devastates the earth. A true love for the Creator, lived in the rhythm of Sabbath worship, would entail a love of the good gift of the created world and a reverent mindfulness of our place in it and responsibility toward it. The model for this love is the trans-generational tending of agricultural tilling and keeping. The recommendation of such love is more than merely the romantic sensibility of a man who witnessed the industrialization of his native Bavaria; it is integral to Pope Benedict’s understanding of the life of faith and the love of God.

Asceticism is for Everyone