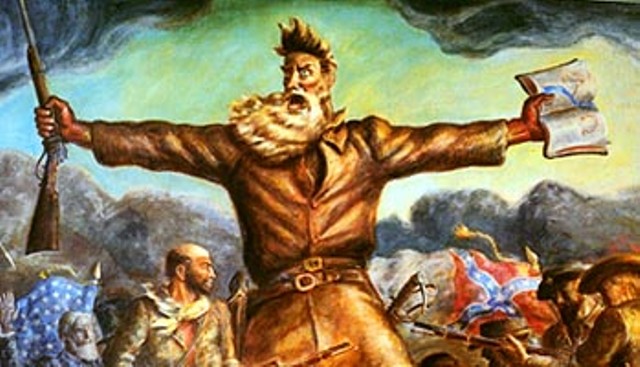 JEFFERSON COUNTY, KANSAS. William Allen White, the noted editorialist of Emporia, once named our shared home country America’s tenth muse—the muse of prophecy. If Kansas is muse, surely one of her prophets was Sockless Jerry Simpson, the marshal of Medicine Lodge who was elected to Congress on the People’s Party ticket in 1890.

Sockless Jerry won his sobriquet in classic fashion—by mocking a buffoonish member of the coifed and cosseted Republican establishment, one Colonel James R. Hallowell. Simpson pulled off a clean political rope-a-dope by mercilessly hounding “Prince Hal” for his fine clothes and silk stockings until Hallowell finally wrinkled his nose and said silk was preferable to dirty men who wore no socks at all. Thus, a legend was born.

The Topeka Capital Journal played right along describing the race as pitting sober, assured adulthood against a child given to throwing fits: “The opposing candidates are opposites in every way. Colonel Hallowell is a brilliant, experienced and competent man who would add strength to the Kansas delegation; Jerry Simpson is an ignorant, inexperienced lunkhead … who would disgrace the state in congress; scarcely able to read and write, unacquainted with public affairs, without experience as a legislator, raw, boorish, [and] fanatical with the fanaticism of sheer ignorance.”

Fanatical or not, Sockless Jerry really was a man of the people. Dirt-man and long-time third (or fourth) party activist, the sockless one stood poised to strike a blow for home and hearth and against the monied interests. Simpson also shared the gallows humor of a people who—by virtue of scratching a living from the earth—understood the principles of scarcity and solidarity.

During one debate, upon hearing that Prince Hal was a man experienced with laws, Simpson reached for a statute book and, pointing to a law imposing a tax upon dogs, said something to the effect that if Hal’s laws tax bitches, they ought to also tax sons of bitches, for the People’s Party “believes in equal and exact justice to all!” It brought the house down.

While the record does not bear out the establishment’s characterization of the People’s Party as spoiled and ignorant children, the real difference highlighted was one of class. Prince Hal and his ilk believed rule was their birthright, and urged the masses to leave it to the eastern educated, the monied, the old families, and the bankers to address complex issues such as monetary policy.

In contrast, Sockless Jerry pronounced on the floor of Congress: “I feel about bankers as I do about certain insects, not to be mentioned in society, which in our worst Kansas hotels come forth from secret places to murder sleep. I have considered these insects, Mr. Speaker. They are, I doubt not from the expression of their countenances, and speaking from bug standpoints, reputable, kindly, honest, keeping every engagement. I can believe them to be good fathers, good husbands, good sons. It is not these insects as mere insects I condemn. It’s the business they are in.”

Thus spoke the Prophet of Medicine Lodge to his time and to ours, for the issues and players are the same now as then. Bankers and profiteers and freeloaders and sturdy beggars and political graftsmen of all sorts, with alphabet soup pedigrees billowing out after their names like exhaust, have pillaged and plundered their way through our national trust—that trust of capital reserve in human character, topsoil, small towns, natural resources, family farms, sound money, freedom from foreign entanglement, and liberty, the greatest trust of all. They have salted the earth and plowed it under while flashing a razzle-dazzle smile and an advertisement for the latest spectacle—tune in at 9/8 central!

David Brooks, a latter-day Prince Hal, huffs silken glue on behalf of the egg-head set who disdain American Idol in favor of Public Television. Angered by some in Congress who failed to rally to the Bush/Obama economic rescue packages (I’ve lost track of which iteration we are currently on) Brooks suggested that those in opposition were “nihilists” who only “listened to the loudest and angriest voices in their Party.”

Instead, Brooks has pled for the reassertion of an adult elite; the firm hand of authority and legitimacy; the sort “wielded … by rich men in private clubs.” Brooks envisions a future of stability premised not on constitutional legitimacy or even democratic legitimacy, but on the “wisdom and public spiritedness of those in charge.”

Do these men in charge produce anything of real, tangible value? Hardly. They are just in the know. Colonel Nelson, Kansas City man and founder of the Kansas City Star, used to rail against the unproductive East: “New York is running the big gambling house and show house for the country. It doesn’t produce anything. It doesn’t take any more interest in where the money comes from than a gambler cares where you get the money you put into his game.”

Tinseled with this au courant legitimacy, Brooks, Giethner, Bernake, Paulson and the rest of the central managers and their vassals obviously now intend to keep people in line and dutifully turned away—to disallow discussion of the obvious and keep the bubbles intact as long as possible, pushing the ultimate consequences of a massive burst off on our children or our children’s children. Not at all disreputable, from a roach’s standpoint.

The tinseled class is soft, stupid, and not worthy of rule. Special pleading all around! Everyone gets a bailout, from Scooter Libby to AIG. Nothing is more fatal to the necessary kind of guns-n-guts legitimacy that solidifies an established order as the refusal of the captain to go down with his ship. This double-cross is a kind of specialized breach of the social contract—you were supposed to die, but you didn’t—further enabling and galvanizing the middle, under, and grievance classes as we emerge from our twinkie stupor and begin to wonder who turned off the cream filling spigot.

So we are as much or more to blame. In exchange for paltry comforts and sweet lies we have willingly submitted to many masters—the tax master, the loan officer, and the payroll clerk; the town inspector, the county inspector, the state inspector, the code enforcer and the permit doler; the dog catcher, the license examiner, and even the busy-body do-gooder from the heart and lung association who snubs out our cigarettes with one hand while paying her registered lobbyist with the other. There are the ad men and experts of all colors and stripes telling us what to buy, what to eat, what to read, and what to believe; there are the snooty professors and the imported school superintendents; the shipping barons, the oil barons, the corn barons, the food scientists, the Wal-Mart feeding trough, and the health care gods. And once consent to these masters is given, opting out is rarely easy (or legal).

Sockless Jerry would have none of it, and neither shall we. American democracy has always been leavened by the Jeffersonian spirit of the small-hold freeman, the yeoman farmer, the independent small merchant and crafstman, the frontiersman, the prairie populists, the lover of liberty who—with his sturdy virtues born of necessity and struggle and scarcity—became self-sufficient, caring and doing for himself, his family, and his community. As proto front porcher John Ruskin put it, “there is no wealth but life.”

It is a difficult thing to recover these sturdy virtues—virtues of thrift, being rooted in one’s place, hard work, pride of ownership, the orderly use of time, fierce independence of spirit, self-sufficiency, charity towards one’s neighbor, a refusal to bend the knee to any master, membership in a communal identity, and a return to family economies that place a strong incentive on having children—but it is necessary if the front porch republic is to have a future.