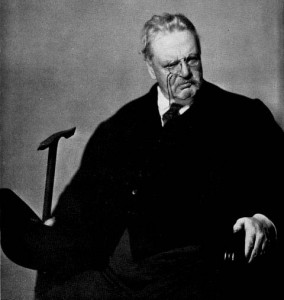 I recently received a handsome, newly published copy of the book America Through European Eyes, published by Penn State University Press and edited by Jeffrey Isaac and Aurelian Craiutu.   Chesterton built (if intellectually) a sizeable portion of this Front Porch, so it’s fitting to allow him some time to ruminate with a cigar and a glass of scotch.  Here’s a portion of what I wrote for a chapter in that book, namely an exploration of Chesterton’s thoughts on patriotism and cosmopolitanism.

________________________________________________________________
G.K. Chesterton took issue the notion that there was really such a thing as “humanity” from a human eye’s view. Humanitarians claimed to love humanity while in fact evincing disgust, condescension and disdain toward most ordinary human beings. “A strange coldness and unreality hangs about their love for men. If you ask them whether they love humanity they will say, doubtless sincerely, that they do. But if you ask them touching on any of the classes that go to make up humanity, you will find that they hate them all. They hate kings, they hate priests, they hate soldiers, they hate sailors. They distrust men of science, they denounce the middle classes, they despair of working men, but they adore humanity” (The Patriotic Idea[PI], 596). Cosmopolitanism was, for him, “a psychological impossibility”: cosmopolitanism was a belief in “unreality,” against the “reality” of nations and the actual bonds that animated humans (PI, 603, 605, 607). Chesterton did not deny that humans longed for the infinite and the transcendent; he found that longing among the most praiseworthy of human desires and aspirations. But, he believed such longing to be improperly directed to the political sphere; rather, he maintained that such longing reflected, at base, the aspiration to know the divine. Humans seeking the God’s eye view of humanity assumed a stature and insight that was unavailable to them; rather, if there was the possibility of “seeing” to the universal, it was only through the particular: “real universality is to be reached … by convincing ourselves that we are in the best possible relation with our immediate surroundings. The man who loves his own children is much more universal, is much more fully in the general order, than the man who dandles the hippopotamus or puts the young crocodile in a perambulator…. A man who loves humanity and ignores patriotism is ignoring humanity” (PI, 597).

The human world is one of particularity, concrete affections and limits: choices must be made between particulars, to the exclusion of others. Cosmopolitanism – another word for imperialism, in Chesterton’s view – harbors the illusion that no choices must be made. To be everywhere and to love everyone is to be nowhere and love no-one: “If you go to Rome, you sacrifice a rich suggestive life in Wimbledon…. The moment you step into a world of facts, you step into a world of limits” (Orthodoxy [O], 45). Cosmopolitans cling to the belief that life in the world can be configured without preliminary commitments, limiting parochialism, or unchosen loyalties. “The assumption of it is that a man criticizes this world as if he were house-hunting, as if he were being shown over a new suite of apartments…. But no man is in that position. A man belongs to this world before he begins to ask if it is nice to belong in it. He has fought for the flag, and often won heroic victories for the flag long before he has ever enlisted. To put shortly what seems to be the essential matter, he has a loyalty long before he has an admiration” (O, 71-2). Cosmopolitans evinced a preliminary dislike for the world, its reality, its messiness and incompleteness. Those working for the “unreality” of the World State exhibited a form of modern Gnosticism with its hatred of the created Universe and its aspiration for an alternative reality when the present world might pass away. The difference was that modern Gnostics like Wells and Shaw saw the new Kingdom unfolding politically on Earth through the transformative efforts of humans alone.

At the same time, Chesterton did not argue for the inherent perfection of all that was “given” and on behalf of an accompanying sense of complacency: while not a pessimist, nor was he a Candide-like optimist who believed that we lived in the best of all possible worlds (O, 71). For instance, he was the first to recognize the limits and drawbacks of the human reality of parochialism. Yet, against the “unreality” of cosmopolitanism, and particularly the fervency with which it was pursued in the modern age, he endorsed localism, patriotism, and nationalism in the face of what he regarded as the deeper dangers and even evils emanating from abstract universalism:

“The danger of small communities is narrowness, but their advantage is reality. Now, at any specific stage in the world’s history we ought to ask ourselves whether humanity is in greater danger from the narrow arrogance of small people, or from the phantasmal delusions of empires. That is the question which confronts the European of to-day, and the answer is not very difficult. It is idle to tell him that nationalism is sometimes an evil in the confusion of a heptarchy, when the fact that stares him in the face that the modern evils arise from remoteness, from unreality, from the circulation of wealth far from its producers, from the waging of wars far from the seat of action, from the wild use of statistics, from the crude use of names, from the investor and the theorist, and the absentee landlord.”
[PI, 614]

More dangerous than the “narrow arrogance of small people” – which he acknowledged to be a danger – were the efforts to dissipate or extirpate local forms of life in the name of abstract principles or love of humanity (PI, 614). Chesterton believed that such efforts would ultimately undermine whatever benefits might be secured by overcoming parochialism, since whatever vitality and devotion larger cosmopolitan entities might achieve had their source in preliminary loyalties. It was the blindness of cosmopolitans to that source – their ignorance that within the very word “cosmopolitan” was the root word polites, meaning “citizen” – that doomed not only their own project, but threatened to extinguish the “reality” upon which human relations are based.

Chesterton believed that one could not rest content with the imperfect conditions of “reality,” but that, before reform should be undertaken, a preliminary “cosmic oath of allegiance” has to be declared (O, 77). Chesterton’s Christianity and his eventual conversion to Roman Catholicism, were based on his understanding of the fundamental alienation of humanity from existence, the fact that “we do not fit in this world” (O, 85). Yet, the world is our reality – along with the limits that accompany reality – and that, opposed to the transformational reforming instincts of moderns to make the world anew, Chesterton asserted that first this impulse must be chastened by an appreciation for, and even love of, that created reality. In short, he argued, we “need to hate the world enough to change it, but love it enough to think it worth changing” (O, 77). “Acceptance” of reality therefore precedes the impulse to transformation: “this need for a first loyalty to things, and then for a ruinous reform of things” (O, 79). Christianity, so understood by Chesterton, does not seek to remake the world uniformly in the image of human desire for order, but accepts diversity and disorder as part of a larger overarching plan. Christianity (as, before him, Tocqueville also expressed) resists pantheism and “accepts” the manyness of “reality” as the only means and avenue by which we can contemplate the universal order that lies behind it: in contrast to pantheism,

“Christianity is on the side of humanity and liberty and love. Love desires personality; therefore love desires division. It is the instinct of Christianity to be glad that God has broken the universe into little pieces, because they are living pieces. It is her instinct to say ‘little children love each other’ rather than to tell one large person to love himself…. All modern philosophies are chains which connect and fetter; Christianity is a sword that separates and frees.”
[O, 139]

It is this theological understanding of humankind, of the “reality” of human diversity, of the temptation to the “unreality” of modern dogmas of the brotherhood of all humankind, that underlie Chesterton’s often conflicted analysis of the United States in What I Saw in America. On the one hand, he saw a nation state, one firmly inspired by patriotism and particularity; on the other hand, he observed a creedal nation that might have tendencies toward the “unreality” of cosmopolitanism. The strength of the latter as it existed in America was, in his view, based upon a firm devotion to the former. Much like Tocqueville, he viewed America as pointing the way toward “the future of democracy,” but he saw that future clouded by the challenge that modern democracy’s tendencies toward political pantheism and international cosmopolitanism posed to itself: “democracy is a very serious problem for democrats” (WA, 254). In Chesterton’s eyes, democracy and Christianity shared similar worldviews, and with the rise of religious doubt, he believed, one could expect to see a concomitant rise in doubts about the prospects of local self-governance, and instead increasing reliance upon experts and elites, in bureaucratic structures, in a growing divide between the rich and poor and the triumph of abstraction over “reality” (WA, 257-263). What Chesterton “saw in America” was a possible future that caused him enough anxiety to write with hope that it would not come to pass. His fears come out in the many passages in which he expresses his confidence in the avoidance of that future, but there are times when he appears to be doing nothing else than laughing in the gathering dusk.

What He Saw in America: G.K. Chesterton’s View of the United...