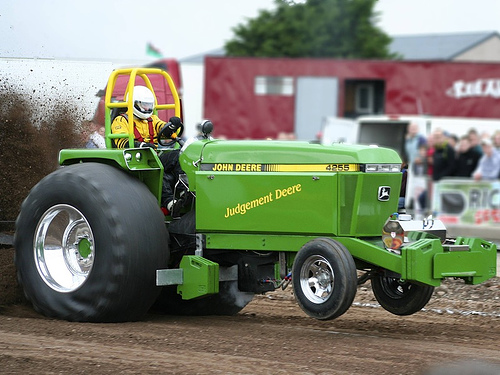 JEFFERSON COUNTY, KANSAS.  In small town America, business owners get to sponsor everything from the high school wrestling team to the “pride committee” chili cook off.  One of the events my law practice regularly sponsors is the annual Jefferson County tractor pull.  It is a day-long shin-dig and offers a fascinating cross-section of rural decline in America, which is really American decline.

The turn out is large and includes both my wife and I and our five sons.  Any observer could tell a lot about rural America from a day at the tractor pull.  One of the first things to strike me is that there aren’t many full-fledged farmers left.  I see some old men who have obviously lived in the fields.  They are, quite literally, weathered.  And they are easy in their weathering, like old oaks, bent in partnership with the prevailing winds, and pleased to be so.

But the majority are middle-aged men who look battered and broken by the unnatural rather than natural elements.  They don’t smile.  If they farm it is likely done in the mode of warfare.  Chemical drops and moving tanks.  I can see that they have the accoutrements of an inherited yeomanry, but by and large cannot carry themselves with the easy competence of their fathers.  The exceptions to this are easy to spot.  These men are truly the life of these gatherings.  I see them dotted around the field, laughing easily and always drawing crowds of listeners.

Then there are the teenage and younger boys.  A few sinewy, tanned youths who obviously work hard have begun to walk with that air of a freeman, humble and world-striding at the same time.  It is immediately attractive to anyone with sense about these things.  These boys will likely make it, though probably not here, which is a final failure of this place, and hard to bear, even in the anticipation of it.

I am most disturbed, though, by the general class of youth—fat and soft, they face the world with an obnoxious arrogance born of deep incompetence and likely as yet undiscovered self-loathing.  I am imagining that they have spent the wealth of their days in front of the TV or video game consol, or in unruly mobs harassing the peace and good order of their bettors.  Sturdy beggars in training.  Their files will fill my office at the county courthouse in the years to come.

Not nearly so many of the women as the men have given up.  They are busy with the food preparation, while a few of the men who remember how are roasting a giant hog.  Later, that meal will be a feast and a blessing King Solomon himself might have enjoyed, and a testament to all that has not yet been lost here.  This this knowledge carries its own special kind of sadness.

And then, of course, at the tugging of my sons, I do see the tractors. Tractors of all sorts.  The middle age and younger set bring their hobby tractors.  These are hot-rod tractors or specialty tractors with interesting, flashy paint jobs and names like “Spare Change.”  They belch fire, roar, and pull hard and fast, but generally not too far.  The old guys who still farm just bring their everyday tractors.  Might be a 1950s model, or a more recent piece from the 70s or 80s. These tractors still have mud on them from work earlier that day.  They pull slow and steady and take home most of the trophies.

I look around and notice the glut of machinery.  Not just the tractors, but the hayfield is chok full of dual rear axle pick up trucks.  Machinery like this has become a compensation for many failures in a rural economy that has passed these men by and has no more need for them.

I imagine that in times past there would have been some down home folk entertainment with Uncle Johnny playing the fiddle while dad strummed the banjo.  But no more.  Now from a myriad of truck windows comes the only poetry left to most here: Johnny Cash, Tom Waits, John Mellancamp, and most of all, the Boss.  Springsteen seems to have special resonance here:

The highways jammed with broken heroes on a last chance power drive / Everybody’s out on the run tonight but there’s no place left to hide.

Well now I’m no hero, that’s understood  / All the redemption I can offer, girl, is beneath this dirty hood.

There is a poignancy to the hopelessness.  I sweat and watch the last labored breathing of the American dream in and among the “suicide machines.”

This hay field I am standing in now strikes me as one of the more moving and tragic accounts of American brokenness, isolation, dislocation, disenchantment, and alienation that I have experienced.  And the Jersey Bard recalls to my mind his lyrical antecedent—the prophet of that robust New England Puritanism which set out to re-sacralize the entire universe—Walt Whitman.

Springsteen is the obvious latter-day Whitman, the Evangelical who has  lost his faith.  He both embodies the iconic “Open Road” and turns it on its head.  While the Witmanesque road is full of expectation:

Afoot and light-hearted, I take to the open road,  / Healthy, free, the world before me,  / The long brown path before me, leading wherever I choose.

Springsteen’s is a post-apocalyptic escape route, littered on all sides with the burned out husks of our ruined suicide machines:

Chrome wheeled, fuel injected and steppin’ out over the line  / Baby this town rips the bones from your back  / It’s a death trap, its a suicide rap  / We gotta get out while were young / ‘Cause tramps like us, baby we were born to run.

We’re riding out tonight to case the promised land, so Mary climb in / It’s a town full of losers and I’m pulling out of here to win.

That’s what comes to mind, anyway, standing in this field.  But now my five year old is tugging my arm.  “Don’t you see the tractors?!  Come on!”  And I can smell the roast pork and cherry pies.  Someone laughs.

Mon enfant! I give you my hand! / I give you my love, more precious than money,  / I give you myself, before preaching or law;  / Will you give me yourself? will you come travel with me? / Shall we stick by each other as long as we live?