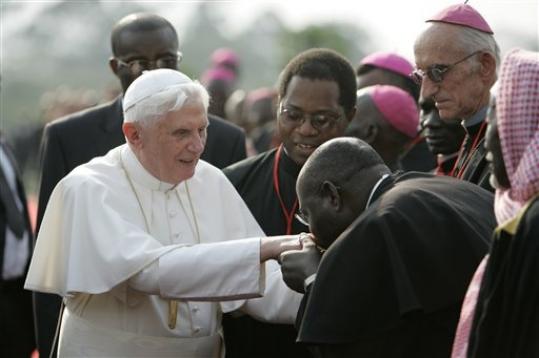 Devon, PA.  During the last few weeks, Patrick Deneen’s posts on Front Porch Republic have drawn our attention to the near identity of the deadly vices of greed and lust.  His effort has been to expose the manner in which lust (perverse or excessive sexual desire) naturally interweaves with avarice (perverse or excessive desire for wealth), and the way in which this cocktail of vice underlies the rage to consume in excess of those limits human need and normal means recommend.  The average American’s living on credit, modeled so nicely on the macrocosmic reliance of the American government on apparently infinite debt and credit to fund itself, comes as the result of a culture that no longer understands lust and greed as vices.  Appetite is endless, “wants are infinite,” and any suggestion that one should or must curtail their grasp is anti-American, undemocratic priggishness.

Occasioning Deneen’s essays, clearly enough, is the consumption-driven economic crisis through which we are now living.  But our moment does not merely offer the spectacle of financial appetites momentarily chastened through the dim recognition that a lust for endless growth, for an insatiable and endless expansion of the economy driven by the continuous bloating of “consumer” desire, has brought us to the brink of ruin.  Alongside revelations of “toxic assets,” immoderate mortgages, financial swindling, corrupt profiteering, and a governmental response that seeks to “correct” our market by perpetuating and administering its evils, appeared an apparently unrelated news item.

Pope Benedict XVI journeyed to Africa and, though his visit there was eventful and glorious, the western media and western persons in general had only eyes and ears for one brief comment the Pope made before his plane had even landed.  John L. Allen, Jr., a journalist with the National Catholic Reporter and frequent critic of the Pontiff, observed how different Benedict’s trip appeared to one with him in Africa than it might to one merely reading the headlines of major western periodicals.  Allen writes,

In the U.S. and many other parts of the world, coverage has been “all condoms, all the time,” triggered by comments from Benedict aboard the papal plane to the effect that condoms aren’t the right way to fight AIDS. In Africa, meanwhile, the trip has been a hit, beginning with Benedict’s dramatic insistence that Christians must never be silent in the face of “corruption and abuses of power,” and extending through a remarkable meeting with African Muslims in which the pope said more clearly and succinctly what he wanted to say three years ago in his infamous Regensburg address, and without the gratuitous quotation from a Byzantine emperor.

The catalyst of this media fixation and this dissonance in popular perception was, of course, Benedict’s unguarded and frank observation about the popular misperception that condom use will somehow solve the African AIDS epidemic:

“You can’t resolve it with the distribution of condoms,” the pope told reporters. “On the contrary, it increases the problem.”

The western response to this claim?  Indignation.  Fury.  Desecration.  Derision.  Assault.  Reactionary denunciations in European parliaments and obscene and insulting “protests” (so-called) in that most vast of western “communities,” the internet.  CNN reports:

Critics took to the social networking site Facebook to voice their fury over Pope Benedict’s remark that condoms do not prevent HIV.

Thousands have pledged to send the pontiff millions of condoms to protest the controversial comment he made to journalists as he flew to Cameroon last week.

Attempts to defend the Pope’s remark (such as Rod Dreher’s) have fallen largely on deaf ears-even as one of the few persons in the world in a position to offer an empirical evaluation of this remark-Edward Green, Director of the AIDS Prevention Research Center at the Harvard School of Public Health-has repeatedly argued it is correct.  Green says that, in Africa, as opposed to many other regions of the world, “What we see in fact is an association between greater condom use and higher infection rates.”  Indeed, African countries with programs supporting condom use tend to see an increase in infection, while those that emphasize abstinence outside of marriage and faithfulness in marriage see corresponding decreases in infection:

We are seeing HIV decline in at least 8 or 9 countries in Africa. In every case, the proportion of men and women reporting multiple sexual partners has decreased a few years before we see the decline. Yet most AIDS programs emphasize condoms, testing, and drugs. So this broad behaviour change has come about in spite of national AIDS programs that have put the emphasis in the wrong places (for Africa). I’m happy to report that the two countries with the highest infection rates, Swaziland and Botswana, have both launched campaigns aimed at discouraging multiple and concurrent sexual partners.

Such an argument, illuminating though it is, is in a particular sense irrelevent to the outrage Benedict has provoked.  The ministers of European parliaments and the young Facebook activists have much in common with one another, something other than a shared concern with the plight of Africans.  Technocrats wish to reduce all human ills to material conditions solvable by material means; the incipient world order of technobrats, appositely, know that a technologically subsidized civilization is the only one that affords a social order sufficently amoral as to require neither self-government nor an understanding of happiness that transcends limitless physical indulgence.

The modern administrators of western societies see that sexual activity has been partially “liberated” from the naturally limiting conditions that make it meaningful and beneficial.  The family unit has been rendered at best an irrelevance and at worst a bureaucratic inconvenience in much of the West, and yet people continue to have sexual intercourse in the aftermath.  Bureaucratic reason in a managed society dictates, therefore, that the routine use of condoms is the only prudent solution to the risks of procreation and veneral diseases.

Sex properly serves an integral function in the fructifying life of the families that compose society.  But family units have come to appear impediments to happiness rather than its condition of possibility, because they are largely unchosen entities whose obligations impose “unjust” restrictions on the kind of “individual self-cultivation” that liberal society preserves as the sole terrain for human action.  Sexual activity stands out, above all, as the one field of freedom, “expression,” and choice left to most persons in managed society, because, removed from its natural context and function, it seems to allow great pleasure with potentially no social cost.  And so, condoms are one actual and symbolic means of limiting the last remaining nasty effects of that freedom in an age after the “death” of the family-at least those “nasty effects” relevant in the empirical minds of the bureaucrats who largely manage western social life.  In the eyes of European technocrats, the only relevant question is the containment of a public health epidemic, and the solution must, inevitably, be a technological one: condoms.

The popular outrage the Pope’s comments sparked is, perhaps, more remarkable and significant than the bloodless grandstanding of technocrats.  So low and narrow has the horizon of human aspirations become in the last several decades, that most persons can no longer envision a form of happiness that cannot be adequately summarized as regular, uninhibited physical pleasure.  While some pay lipservice to a kind of happiness beyond sex, almost none can imagine happiness without it; any limitation on with whom or how or when one makes love therefore appears increasingly like the most indefensible form of oppression.

Most persons in most times, of course, content themselves with simple joys, and all persons in all times take some considerable delight in the pleasures of bodily life.  But for many persons born into this age of lust, avarice, and gluttony, the slaking of fleshly desire-what Tocqueville called physical and “vulgar” pleasures-is all that any longer seems real much less worth while.  In the eyes of many, born into this age of chemical contraception, engineered reproduction, and stop-gap surgical abortion, anyone who calls into question the uninhibited indulgence in such pleasures is not merely “backward,” but a threat to the sole “first principle” upon which society now rests.  Quite literally, for many westerners, if they cannot exercise their right to copulate in a non-judgmental consequence-free and technologically preserved atmosphere, they feel as if their fundamental rights have been threatened.

We should hardly take the Facebook protests organized by “technobrats” and the condemnations issued by technocrats as the expression of thoughtful outrage at a Pope who seems to be standing in the way of a merciful solution to the AIDS epidemic.  Their vitriol spews, rather, from much more immanent and immediate concerns of bureaucratic efficiency and solipsistic desires.  What they defend is precisely a way of life that seeks to forestall serious thought and relieve mankind of the necessity of thinking.  They understand their interests instinctively.  The elites of our society have made the bargain to treat sexual life as largely a private and autonomous sphere so long as they can contain and manipulate its consequences.  “Everyone else” has more or less conceded that life is a meaningless exercise of consumption and excretion made bearable by the endless succession of physical pleasures to which they are given access by an impoverished and bestial version of “freedom.”

As such, I think it incumbent upon anyone who has seen and found repellent the effects of the dissolution of the family, the eviseration of local communities, and the centralization of political power and of cultural capital in the hands of state and “entertainment industry” elites, to view the latest attacks upon the Pope as something more than an incidental news event quite separate from those about the present economic crisis or quite irrelevant to discussions of local culture and local self-government.  He is a sacrificial lamb.

In my next post, “Sex, Eschatology, and Everyday Life,” I shall interpret the significance of Humanae vitae, Paul VI’s encyclical on marriage and contraception, for those concerned with the place of the human being in a sustainable, local community.  I shall there suggest that while the theological importance of this encyclical has not been overstated, such emphasis has unfortunately overshadowed-or even misinterpreted-its cultural significance and great practical wisdom.