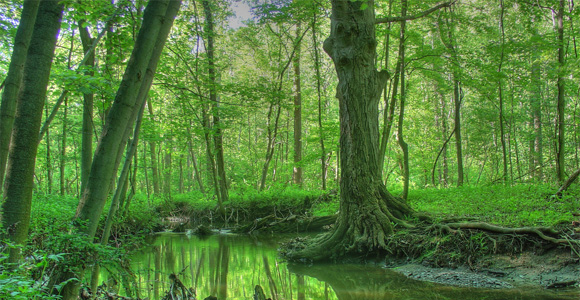 Wichita, Kansas. I have a blogging (and occasional real world, actual face-to-face) friend by the name of Laura McKenna. She is funny, smart, occasionally profane, often wise, and very much a part of–and mostly a fan of–our modern, liberated, democratic world. I read her blog all the time (and so should you), but to my mind, one of the very best things she has ever written–and the thing probably most relevant to the Front Porch Republic–was this short, vicious, hilarious, dead-on truthful attack on the trendy, faux-environmentalist and localist presumptions of America’s upper classes which appeared in Pajamas Media last year. Here’s the best part:

My issue of Domino arrived a few days ago. Domino is a home decorating magazine, aimed at a young, urban demographic. This month’s issue is devoted to green living. From this magazine, I learned how I could save the earth by buying $1,950 cement garden chaises, a $65 wicker hamper, or a $1,695 tree stump fashioned into an end table. I don’t mind when the magazine does its usual promotion of products, but this green issue is simply absurd. How many trees were killed to produce this glossy package of hypocrisy?

You want to save the earth? Here’s a little hint. Don’t. Buy. Shit.

The greenest people are totally unhip and unlikely to be photographed for the Times or a glossy magazine. They’re still wearing their clothes from twenty years ago. They aren’t keeping their home spa-worthy clean. No need to worry about polluting the air with chemicals, if you aren’t dusting every five minutes. They aren’t constantly renovating their kitchens and bathrooms, all of which uses enormous amounts of energy and resources; they are still living with the Formica numbers from the 70s. They aren’t jetting off to Europe to browse the Paris markets; they go bowling in the next town over. They aren’t constantly shopping for new things and tossing out the old things.

This is some poetry in all of this. Grandma with the Hummels has a smaller carbon footprint by doing absolutely nothing than the wealthy do-gooder in the Range Rover attending the NRDC fundraiser.

If you must have a hip home and global warming is a concern, then there are other ways to go. Pick up end tables from a garage sale and paint them. Buy an old house near the center of town. Don’t get your nails done. Don’t drive to the gym. Don’t join a gym and instead, burn calories by gardening. Stop recycling your San Pellegrino bottles and drink tap water.

You could also elect politicians who are willing to make serious efforts in conservation, mass transportation, and in the regulation of industry.

Let’s encourage the eco-conscious to ignore the calls of magazine hucksters to buy stuff, including $1,950 tree stumps. Let’s stop wasting our time with the band-aid solutions and guilt from the eco-moms.

There’s nothing wrong with wanting to make a dent in global warming. But to do it, you need a serious, non-cosmetic, un-cool, and un-trendy change in lifestyle and habits. And frankly there’s no need to make a big fuss about it, get preachy or show off to others how environmentally correct you are. Excessive non-consumption aimed at impressing one’s friends and neighbors is just as annoying — and as conspicuous — as consumption.

The relationship between a properly conceived “environmentalism” and an appreciation of the homely, the local, the simple, and the durable has already been touched upon here at FPR by Patrick Deneen, and I won’t add anything to it. So I’ll just add as a commentary to Laura’s excellent little piece a reprint of what I first thought of when I originally read her column last year: namely, that Laura had just expressed, in modern idiom, something my grandmother used to swear by.

“Use it up, wear it out, make it do, or do without.” Did anyone else grow up with that phrase hanging around their living environment–as counsel, as a warning, as a reprimand? I did. We sure didn’t live it as well as we might have, but still, I heard it recited often enough, from my parents and grandparents and church leaders and others, to accept it as the Gospel truth, long before I read any of the philosophy or politics or economics that persuaded me of its correctness on their own. Basically, the message is that the way to prosperity and happiness–at least insofar as the material world is concerned–is to live conservatively and renounce extravagance and stick with what you have and know. “Pioneer truths” is what we called it, invoking the memory of Mormon ancestors crossing the Great Plains in handcarts, and their descendants who built homes and communities in the midst of poverty and persecution and with next to no consumer goods. If it was good enough an ethos for great-grandma, it’s good enough for us, or so we were supposed to think….

What does Laura’s counsel to her fellow modern liberal thinkers have to do with those traditional principles? Everything! You want to be environmentally conscious and help conserve what resources we have left? Well, then quit buying all that expensive crap that gets shoveled out at us by the Powers That Be, crap that’ll have to be thrown away as soon as you’re lured in by the next model car/range oven/purse/sneakers/lifestyle renovation/electronic gizmo. Resist change, cut back, slow down! Wear that sports jacket for another year! Exercise at home! Garden and eat your own food! Not everyone can do all of this; indeed, given how pervasively the habits of acquisition, competition, and consumption are threaded through most of our daily routines, most of us can’t do most of it. But here and there, we can and should make a stand, however wired our professions or home lives may be. As Laura herself a couple of years back, buying that Blackberry is only going to put you on the clock, make you run more errands, make you burn more gas, keep you away from making do with what you already have and make you compensate by buying more stuff you don’t need and can’t afford and will throw away that much more quickly anyway. So just don’t get one.

So ultimately, here’s her radical idea–real environmentalism begins with “tending to” our environment, rather than upgrading it or ourselves in the name of continual betterment, and supporting those moral causes and political campaigns that are actually trying to make tending to our families and jobs and neighborhoods more possible, rather than selling us on constantly retraining and retrofitting ourselves and our world. I think that about sums it up. But of course, that’s much too long a sentence to fit on a bumper sticker. So stick with what grandma said. As Laura succinct evisceration of eco-consumption makes clear, it’s more relevant to being a modern person today than ever.