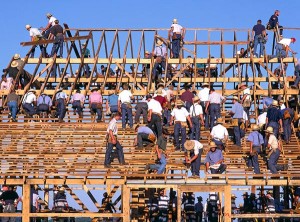 An article in last week’s Washington Post explores the revival of communities as a response to the economic crisis. According to the article,

As the neighbors got out of their homes and started talking to each other, the sense of connection grew. They learned one another’s names and began to say hello at the nearby Giant. Somebody got Metro to trim the shrubbery around the Glenmont Station, which made it feel safer. They had a “visioning” session for their community and created a colorful Web site. At their first spring festival, April 25, 174 people showed up for face-painting and hot dogs.

The little Cape Cods and ranchers off Georgia Avenue have been there 55 years, but it took a global downturn to turn them into a real neighborhood.

What this article suggests is that the individualism, isolation and “silo living” that had been the norm for 55 years (!) – that is, that period dating back to the beginning of American suburbanization and our automobile culture fueled by cheap petroleum – is a luxury that we can no longer afford. Individualism, it turns out, may be one of the ultimate luxury items of a prosperous society, one that turns out to be as artificial as the bubble economy and false prosperity upon which it was based. What the community of Glenmont has discovered is something that was the norm in most towns, villages, cities and communities for most of human history: people gather together because we are partial and needy, and we can only achieve the good life together through the effort to achieve together and in concert a shared conception of the common good. Moreover, such common good is not the product of pronouncements of distant government or abstract philosophy, but derives from the lived experience, common concerns, shared history and interlinked destiny of those people who live together. Some economists doubtlessly have read this article and regard it as a highly inefficient expenditure of time and energy on non-productive and unprofitable endeavors. As Aristotle would respond to such economists, they seek to concentrate on “mere life,” not “the good life.”

This article should be read and considered alongside this recent article from The New York Times which reports census findings that fewer Americans have been able to move since any time since 1962. Of course, this reportage will truly alarm economists – much as it is portrayed by the NYT reporter as a sign of calamity and distress – rather than a positive trend in favor of stronger neighborhoods and the possible source of a renewed sense of loyalty and commitment. However, given our prevailing default preference in favor of mobility (especially, and always, upward mobility) that is promoted (through public policy no less) in order to support the creation of an absentee economy and itinerant workforce in which connections to production and consumption are all but severed, there can be little wonder that elites at the New York Times regard this census data with alarm. After all, above all, the New York Times is devoted to promoting a deracinated culture that allowed for the creation of the reporters at the New York Times.

Many years ago, Albert O. Hirschman wrote among the most perceptive books yet written – intended to describe an economic phenomenon, but more widely applicable to most human relationships, and more broadly, politics in general. Entitled Exit, Voice and Loyalty, Hirschman described how organizations tend over time to develop “slack” (that is, cease to be wholly responsive to their constituents); in response, people involved in those organizations (at least in a liberal society) have two fundamental options: exit or voice. That is, they can choose to leave for some other organization (e.g., in economics, they can choose to purchase another product), or they can choose instead to exercise “voice” – that is, to engage with other members of that organization to convince the organization to change its ways. In order to exercise voice, however, there needs to be high levels of loyalty: otherwise, exit proves to be a less costly and time-consuming transaction. For consumers – or the consumer mentality – we tend mostly to think in terms of exit. If some product doesn’t meet our desire for whatever reason, we simply buy a competitor’s product or forgo the purchase altogether. Rarely – as in the case of Coca-Cola’s introduction of “New Coke” some years ago – there is a deep base of consumer loyalty that fuels “voice,” in this instance, demands of the return of “the Real Thing.” However, in consumer society, such loyalty is rare and even nearly non-existent. It makes little sense to be “loyal” to a product.

Politics, society, and family life presumably operate on a different model, one in which loyalty is more likely to cause us exert greater levels of voice and be less likely simply to exit. However, much evidence of recent decades suggests that the option of “exit” has everywhere overwhelmed loyalty: that is, the model of economic life has tended to transform every aspect of life in its image, leading individuals in nearly every role of life to exhibit decreasing levels of loyalty in favor of the exit option. Particularly where loyalty cannot be expected in return – people are simply moving, leaving, and divorcing too often for anyone to be unquestionably loyal, and we live in a society that actively promotes “exit” as a default way of life – we are far more likely to exhibit tendencies or proclivities toward exit. Even where we do not literally exit, we proverbially exit, escaping to gated bedroom “communities” where we can live private lives apart from the interference of any of our “neighbors.”

These two stories, published within two weeks of each other, are remarkable for the change that they suggest may be afoot. Where exit is harder and not simply the default, we are more likely to foster relationships of loyalty and thereby find firm ground in which to exercise voice. Finding voice, we thereby build relationships that increase loyalty. A society of voice born of loyalty is one of greater civic solidarity. It is more likely to be one of neighborliness and mutual assistance. It is a society from which culture might be expected to arise – that is, a shared set of common understandings that stand the test of time and become an inheritance across generations. We are a long way from achieving the conditions of true culture in contemporary America, but these are promising signs.

Most importantly, it is through the existence of a rich tapestry of actual neighborhoods that the best resistance to centralized authority is to be found. Tocqueville – as ever – understood this best. For a long time Tocqueville’s admirers on the Left have admired his criticisms of individualism, while those on the Right have lauded his criticisms of centralized authority. What both have generally failed to do is put these two criticisms together: namely, that it is in a society composed of isolated individuals that one is most likely to see the rise of a centralized bureaucratic State – “the vast tutelary power.” Consider this passage rarely cited by any of Tocqueville’s admirers:

In centuries of equality no one is obliged to lend his force to those like him and no one has the right to expect great support from those like him, each is at once independent and weak. These two states, which must neither be viewed as separate nor confused, give the citizen of democracies very contrary instincts. His independence fills him with confidence and pride among his equals, and his debility makes him feel, from time to time, in need of the outside help that he cannot expect from any of them, since they are all impotent and cold. In this extremity, he naturally turns his regard to the immense being that rises alone in the midst of universal debasement. His needs and above all his desires constantly lead him back toward it, and in the end he views it as the unique and necessary support for his individual weakness. (II.iv.3).

That is, when we are isolated, alone and most fully individuated, we are most likely to turn to the assistance of the central government when (inevitably) the going gets rough. By contrast, when we live among a strong community of fellow citizens with whom we regularly consort and build relationships based upon trust, history and memory, we are more likely to turn to those people closer to us when times prove challenging. As usual, “conservatives” and “liberals” get roughly half right – and, more importantly, half wrong – in thinking that either we must have the assistance of government or encourage individual self-reliance. What is needed is less exit, and instead, more loyalty and voice. What is needed is what is now happening in neighborhoods like Glenmont, and which – it can be hoped – will happen throughout the nation, if we are to keep our liberty and even aspire to live “the good life.” It won’t be what the economists wish of us, and it’s a good thing too. There is more on heaven and earth than is dreamed in their philosophy….

Previously posted at What I Saw in America.