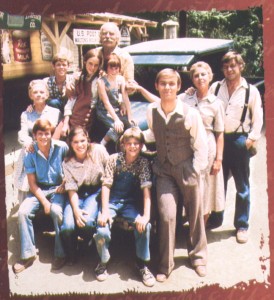 Kearneysville, WV. The debate, such as it is, between liberals and conservatives frequently centers on issues pertaining to that oldest of institutions, the family.  On the one hand, there are those who insist that the so-called traditional family is merely a form of patriarchal power masquerading as domestic bliss and that we can choose better arrangements built on mutual respect and equitable distribution of power. On the other hand, there are those who seem fairly to worship the nuclear family as the sum total of God’s intention for the family. Both views, I think, overlook important elements about the family that are easy to miss in a world characterized by autonomous individuals roaming the earth seeking personal satisfaction or fulfillment.

Those who deny that the traditional family is in any way normative argue that people are first and foremost individuals who have needs and desires and the capacity to choose. Furthermore, any decent society will work to ensure that individuals possess the political and economic freedom to exercise their autonomy to the fullest extent possible, limited only by the rights of other individuals. This view of human nature will result in a bursting forth of new and unique family structures, each tailored to the needs and desires of those participating in it. One man, one woman, and a handful of children? Fine, albeit a bit old-fashioned. Surely someone is being oppressed and likely abused. Two men and a baby? Wonderful. Traditional roles are merely social conventions that should be overturned. Two women, three kids and a dog? Sure. The white picket fence adds a nostalgic veneer over this novel arrangement. Three men, one woman, and children fathered by all three? How progressive. Only a judgmental prude would think to object. As long as there is love and no one is being coerced, then the family that emerges is just fine.

But are things really that simple? Can individuals call the tune and expect nature to caper forth ready to dance? Or are there limits imposed by the structure of reality that constrain the ways that we arrange ourselves socially? Of course, we can choose to ignore limits and let our imaginations run unfettered, but ignoring or even denying natural norms is not the same as making them disappear. One can, presumably, dance on the edge of a precipice, but sooner or later gravity is going to demonstrate some very old-fashioned truths.

What are the natural limits, the natural structures, to which the family ought to conform? Note, in passing, how the simple word “conform” causes a slight shudder. We have been taught, by word if not by deed, that conformity is evil or at least in bad taste. We should, instead, think in terms of novelty. Each person should be an original. Of course, such thinking is really the product of the autonomous individualism and the progressivism that so infects our collective self-understanding. Is conforming to something a bad thing? Only if the thing to which one conforms is a bad thing. If one seeks to conform to standards that are good and natural and healthy and sane, then conformity is clearly a good idea.

Certain standards do exist for the family. First, one function of families, perhaps the most important, is to provide a loving, healthy environment in which children can be produced and nurtured with the hope that they will one day be mature adults capable of raising families of their own. In short, families are the means by which the human race and human culture is perpetuated. On the biological level, there is only one way that babies are naturally made. One man, one woman, a few sparks, a few months, and out comes junior. It’s all quite simple.  Elegant, really.  Biological reproduction seems as natural as eating, sleeping, and email.

It seems, then, that from a biological view, a family necessarily begins with one man and one woman. This arrangement is the norm for humans as cultures naturally built upon the normative structures imposed by the natural fact of biological reproduction. The two parent (one male and one female) family has been a constant in most societies throughout human history. This near universality, of course, does not automatically mean it is the best or that is it morally superior, but when biology and culture both point in the same direction, surely the burden of proof is on those who seek to invent a different standard.

There are those who will point to the single mother or the single father or the home in which two men are raising a child and say “what about them? Aren’t they normal?” First, it’s admittedly odd that in a world where conforming to a standard is so denigrated, people would long to be considered normal by the rest of society. Second, the existence of families that deviate from the norm does not obviate the norm nor does it necessarily condemn those who do not conform to the norm, just as the existence of blind people does not obviate the fact that seeing is normal or imply condemnation of blind people. The existence of single mothers, for instance, does not force us to admit that single motherhood is the ideal toward which all families ought to aspire. A norm is an ideal representing the way things should be if all things were perfect. Unfortunately, the world is not a perfect place. But to say the world is not a perfect place is to tacitly admit that a standard of rightness exists, a standard by which we can compare the world and recognize its imperfections. In terms of the family, the two parent (male and female) model is the norm. That this standard is rooted in biology is obvious. That the vast majority of societies have affirmed this is not conclusive, but it does provide evidence that cannot be ignored even if one objects to the standard.

So a family based on the biological unit of a mother and father is the norm for the creation of children. It appears, then, that the nuclear family emerges as the standard, rooted in nature, representing the norm for the family. Here we need to pause. While it is undeniable that a man and a woman are the necessary elements for the begetting of children, men and women do not exist in solitude prior to their union. They, themselves belong to families. The parents, themselves, were inculcated into a particular set of social traditions mediated by the family into which they were born. When a man and woman join to form the basis of a new nuclear family, they bring with them the stories, memories, habits, customs, practices (as well as the social and genetic anomalies) of their respective families. When the two raise their children, they are surrounded by a great cloud of witnesses (and busybodies) both alive and dead, that envelopes the family they have initiated.

The nuclear family may be the norm for the simple production of children, but it has not been the norm for their upbringing. In a pre-industrial world where people tended to stay put, extended families created an atmosphere of nurture, care, discipline, advice, meaningful work, as well as stories that provided the narrative context for the lives of each individual. In the west, the intact extended family has largely given way to the transient family that encounters family members outside the nuclear family only at reunions and holidays at the beach. In a mobile age, where leaving home is as easy as calling U-Haul, the nuclear family has come to be seen, by many conservatives, as the ideal. Forgotten is the richly textured world of multi-generational interaction made possible when nuclear families were embedded into the larger structure of the extended family.

The family has not escaped the individualism that pervades our society. The isolated nuclear family, existing as a lonely island on the sea of society, is not the ideal, and it can be seen as a step in the direction of a fully fledged individualism where any unchosen attachment is deemed undesirable. Of course, in particular cases, this sometimes cannot be avoided, but exceptions are different than expectations, and when exceptions become the norm, propriety has been lost.