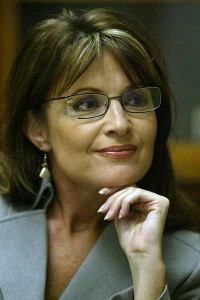 Kearneysville, WV. One of the stars in the Republican galaxy (notable today mostly for its lack of stars) pulled a surprise move last week that has plenty of people scratching their heads. Her resignation with 18 months still left in her first term as governor of Alaska seemed a curious move for one of the presumptive forerunners for the Republican presidential nomination in 2012. Her rambling 20 minute speech was, apparently, intended to provide her rationale for stepping down, but it was disjointed and left many unsure about her reasons. Her speech included several parts (interspersed with ducks quacking as they paddled around the lake in the background).

Perhaps not surprisingly, she spent time describing the successes of her administration. OK. Fine. She’s been in office for two-and-a-half years and she seemed eager to roll out her litany of accomplishments.

She spent some time castigating the media and others who have, she claimed, spent an inordinate amount of effort attempting to dig up dirt on her and her administration. Of course, the scandals associated with Senator Ted Stevens have not helped to clear the taint of corruption from the pristine Alaskan air. But Palin chose to focus on the money wasted in conducting these, thus far fruitless, investigations against her. One reason for her resignation seemed to be that she wanted to spare her state the financial burden of defending her against frivolous lawsuits.

She also expressed concern about the problems of lame-duckery in general. When she decided to forgo seeking a second term, she also began to think of her political situation as a lame duck governor. She argued the obvious: that a lame duck is in a weak position and less able to motivate an agenda. But such is the trial faced by all lame duck executives. If her reasoning were turned into a political principle, all lame duck executives would resign midway into the final term.

But she wasn’t suggesting that others follow her lead. She insisted several times that she’s not into playing politics as usual. She is, in so many words, a maverick, like that older maverick who pulled her from relative obscurity less than a year ago and thrust her (not unwillingly) onto the national stage. The maverick label cuts two ways, of course, and unpredictable is one of the connotations. Some less than enthused by maverickism might snarkily suggest that unpredictable and unreliable are not really very different. For me, I’ve always been a little suspect of anyone who feels the need to inform me that he or she is a maverick. Would a true maverick need to remind us?

Palin also insisted repeatedly that she might be leaving her official office but she would continue to “fight” for the things she holds most dear. This fighting language has become the norm for political discourse and I don’t really like it. “Fight” implies a fearsome struggle between incommensurable foes where one side or the other must go down in flames. It implies a view of politics that is ultimate. That is life or death. Much better is some word like “work,” as in “I promise to continue to work for the ideals that I have always held.” The language of work suggests a world that requires ongoing efforts to make improvements where possible. To suffer defeats with dignity. To continue faithfully in service to ends that may never be achieved and if achieved are not likely to last long.

Near the end of her speech she turned to matters of family. When she asked her children whether or not she should step aside, the response was a unanimous and enthusiastic “yes.” This is telling. In these words I heard a mother asking her kids if they would like to spend more time together and they responded in the affirmative. This, I thought, was the most convincing part of her speech. The other reasons for her action seemed contrived. This one I could believe.

Which raises a question. If her family is the reason for stepping down, then isn’t it a good thing she and McCain didn’t win? Surely having a Vice President step aside would be a major blow to a political party. And if she stuck to the job, that would, presumably, have been a major hardship to her family.

I wonder, then, if Sarah Palin tried to do what seems virtually impossible: to have a demanding career and at the same time raise a young family. That her youngest has special needs only raises the ante. Are we doing a disservice to our girls to create the impression that such a life is realistic? Is it curious that many of the conservatives who tout family values were, and are, so enthusiastic about Palin?

Yet, perhaps spending more time with her kids is not the whole story. According to one Alaska lawmaker, Palin has been less than engaged with her job since the presidential campaign. “She had a surprising amount of disinterest in state government after November,” said state Rep. Les Gara, a Democrat from Anchorage. “This state has a lot of problems, and she showed a complete lack of interest in solving them.”

On Sunday, Palin hinted on her Facebook page that she is not planning on receding into obscurity. “I’ve never thought I needed a title before one’s name to forge progress in America. I am now looking ahead and how we can advance this country together with our values of less government intervention, greater energy independence, stronger national security, and much-needed fiscal restraint. I hope you will join me. Now is the time to rebuild and help our nation achieve greatness!”

With her unorthodox decision, conventional wisdom would suggest that Sarah Palin’s political future is less than promising. Her star may be waning, but the national spotlight is, it seems, a powerful attraction. Even for mavericks who don’t like nosy reporters from the mainstream media. Even for mothers with small children.

Look for a talk show on Fox News by fall.