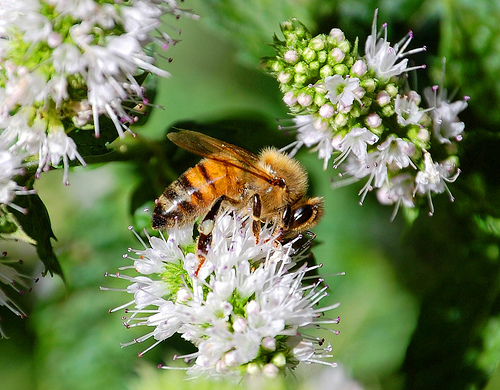 Henry County, Kentucky.  When the massive dieoffs of commercial bees first became evident a little less than three years ago, what is now called Colony Collapse Disorder was national news.  These days you hear less about it, perhaps because it is no longer a breaking story.  Or perhaps we are susceptible to apocalypse fatigue, especially when there has been no apparent decline in the availability of fruits, vegetables and nuts.

The problems continue, though, whether we think about them or not:  colonies continue to die off or sicken, beekeepers continue to go out of business, and to the extent we even know what is happening to our native pollinators (the humble bumbles and the like), they too appear to be stressed and declining.  Nor are commercial beekeepers the only ones affected; plenty of hobbyists have seen their stay-at-home hives collapse.  Last month I asked my local orchardist how his hives were doing, and the answer was Poorly.

In May the Department of Agriculture and the Apiary Inspectors of America (AIA) reported that American beekeepers lost well over a quarter (29 percent) of their colonies from September 2008 to April 2009.  That number is down from 36 percent the year before, and 32 percent in 06-07, but it’s still awful.  And as the name “Colony Collapse Disorder” indicates, we don’t yet definitively know what’s happening.  As Scientific American reported in March, “the growing consensus” is many factors are involved.  Hives stressed by poor nutrition, exposure to pesticides and fungicides, and perhaps also cross-country travel weaken and become susceptible to viruses that then destroy them.  The bees just disappear.

Rowan Jacobsen’s recent book on the subject (Fruitless Fall: The Collapse of the Honey Bee and the Coming Agricultural Crisis) gives a well-reported and clearly organized discussion of CCD– the theories of its causes, and also what various researchers and some holistically-minded beekeepers are doing to strengthen and save the honey bee.  In an email exchange he said he was glad the percentage of lost colonies declined a bit this year, but added that he thinks beekeepers are just getting better at nursing sick colonies.  “Basically, they’re keeping more bees alive by moving them to intensive care,” he wrote.  “But considering all the extra attention and expense, I found the number of deaths pretty demoralizing.”

Bees have enthralled us for millenia, and not just because of the miracle of honey–though in the centuries before sugar and corn syrup, that intense sweetness would have seemed miraculous enough.  They are fascinating animals, a superorganism of instinctive and adaptable behaviors, and they have busied themselves alongside us for a very long time.  Since Mr. Jacobsen has written about bees and not just their collapse, his book is full of their capabilities:

* In the 1980’s an entomologist and environmental chemist at the University of Montana named Jerry Bromenshenk trained bees to find chemical pollutants.  (This is possible because bees can be trained to track down any odor associated with food.)  More recently he has trained them to detect land mines, though this work is secret and he refused to discuss it with Mr. Jacobsen.

* The now-traditional hive used by commercial keepers and most hobbyists in the Langstroth hive, whose comb supers lead bees to create relatively large cells of a single size.  But wild bees create comb cells of variable sizes, and the smaller cells seem to help the nurse bees find and destroy the varroa mites that have so plagued American bees since 1987.  Hence some hobbyists are turning to topbar hives, which unlike the Langstroth design allow bees to vary their comb size as they choose.

The book has some good news in it as well.  A few years after the infestation of the varroa mite, all the wild colonies of escaped honey bees died, but there are some wild colonies now (I heard rumor of one near us in Kentucky a year or two ago).  Russian honey bees show more resilience than the more widely available Italian.  Taking a less-medicated, let-the-bees-lead route, beekeeper Kirk Webster in Vermont has had success in allowing his bees to breed themselves into better health.

But there is no simple answer.  In his quest for a better breed of bee Mr. Webster watched a lot of his colonies die in the process, taking a finanical loss not all beekeepers could or would bear.  Also, he is able to segregate his queens in the Green Mountains at breeding time, which is not possible in many other parts of the country.  Russian bees are harder to handle commercially than the more mellow Italian.  And so forth.

The fact remains that we have overtaxed and overmedicated an animal that is particularly adaptable to living among us, and uniquely valuable.  Two years ago Mr. Webster wrote in the American Bee Journal that “[b]eekeeping now has the dubious honor of becoming the first part of our system of industrial agriculture to actually fall apart….We are losing our ability to take care of living things.”

Yet we are so dependent on the bee.  One commonly cited estimate is a third of our agricultural production depends on bee pollination, with most of this being done by commercial bees.  Such is the case for the California almond crop.  Every year in January (as Mr. Jacobsen explains), up to half the commercial bees in the U.S. travel to California to settle in for the almond pollination season in February.  Almonds are picky about their climate, but they like California, and so now over four-fifths of the world’s supply is grown there, making almonds a more profitable crop for the state than wine.  Two winters back there was fear that this past February there would simply not be enough bees to saturate the groves with the millions necessary to pollinate the nuts.  But with the economic tailspin, a glut of almonds from the year before, and a drought that took acres of trees out of production, Mr. Jacobsen says there were more than enough bees even with continuing CCD losses.  In fact, prices for hive rentals were down and it was a bad financial year for the beekeepers who service the almond groves.

All of this means the ultimate victims of this crisis may not be the bees.  While a Black Death is culling huge numbers of them, it doesn’t appear we are in danger of honey bees becoming extinct.  We may be watching the extinction of the professional American beekeeper, however.  (“We can’t stand another bug or virus or pest,” is what the president of the American Honey Producers Association told Mr. Jacobsen.)  You can put a beehive nearly anywhere, just as you can grow vegetables nearly anywhere, but without the experience and the willingness to tend to these our smallest herd animals–and without enough of the gypsy bees moving from field to field of monocrops, from which most of us still eat–well, barring significant changes in the way we farm, sooner or later we may find that muskmelons have become luxury goods even in July.  We take our summer largesse for granted, but then we have long taken bees for granted, and now we can’t.

Of Bees and Moonshine