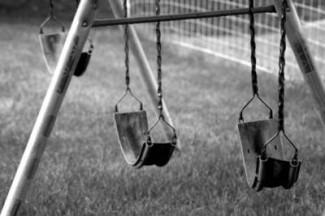 My brother Brett and I were polite but rambunctious children who made a game of killing bees and dumping their carcasses into buckets of rainwater.  Having heard that bees, like bulls, stirred at the sight of red, we brandished red plastic shovels, sported red t-shirts, and scribbled our faces in red marker.  They were small, these shovels, not longer than arm’s length.  And light, too.  So light, in fact, that we wielded them with ease: as John Henry wielded a hammer or Paul Bunyan an axe.

The bees had a nest somewhere within the rotting wood of our swing set.  Monkey bars made of metal triangles, much like hand percussion instruments, dangled from the wooden frame above; when struck or rattled with a stick, these replied in sharp, loud tones, infuriating the bees, a feisty frontline of which launched from unseen dugouts.

These deployments, though annoying, were easily outmaneuvered: Brett and I swatted them to the ground with our shovelheads.  Mortally wounded, they twitched and convulsed, moving frantically but going nowhere; all except one bee, valiant as he was pathetic, wriggling toward his nearest companion, his maimed posterior dragging in the dirt.  Not much for voyeurism, I relieved him of his misery.  Then Brett and I whacked the littered lot into tiny bee pancakes.

Meanwhile, the defeated community, convening somewhere in the wood, commissioned its combat medics: fat, steady-flying drones that hovered airborne over the dead and then descended, slow and sinking, like flying saucers.  The medics would, when we let them, carry off their dead to an undisclosed location.  I couldn’t watch this disturbingly human ritual, so instead I annihilated the medics, too.  They were easy targets, defenseless.  And they kept coming in battalions of ten or eleven.  As soon as I’d destroy one battalion, another materialized to attend to the new dead.  Unlike the frontliners, the medics didn’t try to sting.  They just came to collect.  But I wouldn’t let them.  Neither would Brett.  Eventually, they quit coming.  That, or we killed them all.

Bees are funny creatures.  Unlike birds, they have two sets of wings.  Most female bees, unlike most female humans Iknow, grow their leg hairs long and their bellies plump—this in order to carry nectar or pollen.  Bee pollination accounts for one-third of the human food supply.  Without bees, then, we might not have our Big Macs or Whoppers—nor, for that matter, honey or flowers.

When I lived in Japan, I had a friend who fancied himself an entomologist.  When he and I tired of talking politics, books, or women, we spoke of insects: I told him weird insect stories, and he explained away the weirdness.  He informed me, for instance, that the bees living in my swing set were probably solitary bees: a gregarious species that stung only in self-defense.  This, you might imagine, was sobering news for an insect murderer.

I asked about the medics that carried away the dead.  Honey bees, he said, discarded their dead for hygienic reasons—to prevent the spread of infection—and they coated their dead in antibacterial waxes.  As for the behavior of my bees, however, he wasn’t sure: maybe they, like honey bees, discarded remains where germs wouldn’t spread.  Or maybe—and he said this facetiously—they conducted funerals.

It wasn’t long before Jared, the boy next door, got in on our bee brutality.  Pregnant with mischief—more so than me or Brett—he decided one day to show us something; shepherding us through the woods, lifting a disarming smile as if to say, “Trust me,” he paused at last, indicated a hole in the ground, and declared, “Thisis it!”

A steady stream of yellow jackets purred in and out of the hole.  He waved his hand to signify the totality of our surroundings and said, “Ours.  All ours.  None for the bees.”

Or something to that effect.

Brett and I nodded in agreement, awaiting instruction.  If we were confused by Jared’s deranged sense of prerogative, we didn’t show it.  Brett found a heavy rock, which I helped him to carry.  We dropped it at Jared’s feet.

Jared summoned forth a mouthful of mucus and hacked it into the hole.  Unfazed, the yellow jackets buzzed in acknowledgment but otherwise ignored the assault.  “These guys are in for hell,” Jared said of the bees, offended at the ineffectuality of his first strike.  He anchored his feet and bent over the rock, which he heaved to his chest and, leaning backwards, rested on his belly; then he staggered a few steps, stopped, and—his face registering another thought—dropped the rock to the ground.

Brett and I, obedient friends that we were, doctored the rock in spit.

Then Jared undertook to finish the job he’d begun:  he bent down, lifted the rock, waddled to the hole, straddled the hole, and dropped the rock.  The ground thumped.  A small swirl of dust spiraled into miniature tornadoes that eventually outgrew themselves and became one with the general order of things.

“That’ll do it,” Jared said, clapping his hands together to dry the spit.  The colony, its passage blocked, was trapped both inside and out.  Those un-entombed bees, rather than attack, simply disappeared.

We rejoiced in our victory.  Jared pantomimed conquest, pretending to hold an immense, invisible world Atlas-like over his shoulders.  Brett danced.  I was so busy watching Jared and Brett that I can’t remember what I did.

We didn’t know that yellow jackets engineered nests, tunneled hidden passages and backup exits; nor did we appreciate what the tiny zealots were capable of.

It started with trifling harassment: a slight, circling buzz—reconnaissance probably.  Then I felt the first sting; looking down, I saw a yellow jacket, curled like a question-mark, bearing into my leg.  I spanked it dead.  It looked angry—something in the way it moved.

I heard Brett scream.  Then Jared.  Then saw the ubiquitous cloud of yellow jackets rising in the air, moving as one unit, enveloping us with fatalistic purpose.  My ears filled with the steady drone of thrumming wings.

Then, as happens in moments like this, moments of panic, moments when one feels he’s lost control, feels some other faculty taking over, I submitted to a greater power, which stiffened the muscles of my neck and arms, sent contractions through my calves and thighs, like spasms moving me forward, making me to run, the house, my house, once far away, a small square, growing larger and larger until at last it became a complete, reachable form, the door, my safety, announcing its presence, telling me to hurry, hurry.  Ahead was a fence.  I’d have to jump it.  I measured my strides for the leap, which, miraculously, I achieved with the slight assistance of my palms upon the fence-top.  I found the doorknob, dove into the kitchen, flung off my clothes.  The drone wouldn’t go away.

But where was Brett?  Not here.  Where was he?  Just then came a voice—“Allen!  What in God’s name?!”—and then mom was beside me, horrified, her eyes growing three-times their normal size; and then she was gone again; somehow I was back at the door, looking outside, at the yard, at mom battling the fleet of yellow jackets, at Brett stuck on the fence top, screaming, his face flushed red—red!—his arms leaking blood.  Was that blood?  Or a sore?  I couldn’t tell.

Mom deposited Brett in the kitchen, stripped him naked, called the doctor.  Tweezers.  I remember tweezers.  Yellow jackets were in his ears and mouth.  They were everywhere.  Outside, they continued ramming their bodies into the window.  I looked out.  One hovered there.  It looked at me.  I looked at it.  Insect and Man.  Sizing each other up.

In light of these memories, I can’t help but sense that, no, on account of their characteristics and functions, bees are not the affirmative, happy creatures of some Wordsworthian lyric; that they are too much like us for armistice or reconciliation; that, in fact, we will never see the last of them, as they will never see the last of us.  They will live on, as will we.

Let the boys at them, and they at the boys.  That’s how it ought to be.  So alike are the two that it’s hard to tell who has the advantage of intelligence.  I learned, those many years ago, before the profundity of it all struck me,that wounds can teach the tragic lessons of ignored similarities.  There’s something to be said for that.

If nothing else, I have come to admire bees for their tenacity and courage in the face of insurmountable power.  Theirs is a world of flux,disorder, and death.  Their body is a weapon, one that, once used, terminates everything.

Boys war with bees.  Bees war with boys.  Just another kind of outdoor game, one on a side, except no one can say “Elves.”  Not in this game.

In this game, there is only one ending.  Even in victory, the bees lose.  It takes a man to understand; it might just take bees, or something like them, to make a man.