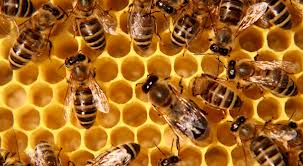 Hidden Springs Lane. In the spring of 2012, I started keeping bees. The first thing to notice is that people do not raise bees or herd bees. In fact, one does not compel bees to do much of anything. One merely keeps them. Or it might be more accurate to say that one attempts to keep them: keep them from leaving; keep them from dying. At its best bee-keeping seems to entail the attempt to create ideal circumstances to allow the bees to do what it is that bees do.

For most people, bees are stinging nuisances to be avoided if at all possible. However, the honey bee is a remarkable creature that makes a surplus of a remarkable substance that humans have sought for thousands of years. As a natural sweetener, honey is hard to beat, and the experience of tasting honey from a hive you have cared for is a high ranking pleasure.

While bees are fascinating creatures, those humans who deal with bees are no less intriguing. I purchased my hives and bees from a fellow named Mark, who does a thriving business in West Virginia. During the spring, he commutes each week to Georgia where he keeps hundreds of hives. Each week he brings back a trailer full of “packages.” These are rectangle boxes, roughly 16×8 inches. Two of the long sides are screened with a tight mesh. The boxes contain three pounds of bees. A queen is inside in a small box containing several workers who tend to her. Driving home with thousands of bees buzzing in the back seat requires a bit more nerves that one might imagine, especially when one or two escapees find their way into your car as well: keep eyes on the road and at least one hand on the steering wheel. Roll down the window and whatever you do, don’t slap the bee if it lands on you.

Mark and his bee business, which is situated in an old garage, is a busy hive of activity on a Saturday in spring when bee-keepers in the area gather to pick up packages, purchase various wooden components for hives, and to solicit advice from Mark or other experienced bee-keepers. Mark is not one to be hurried and seems as inclined to tell stories as market his wares. As a result, the process is not quick and, one might as well settle in for a spell and enjoy the parade of characters that pass through.

There was an elderly couple, both remarkable for their deeply tanned faces and stunning blue eyes. The man had a pony tail that was still blond. Although, they walked with the gait of people who once walked faster, their eyes were quick and their leathery faces were well-lined from years of smiling, which was something they seemed naturally inclined to do. They drove up in a beat up Subaru with a Jesus is Lord bumper sticker, but I wouldn’t have been surprised to see a Greenpeace sticker as well. An amiable lab occupied the back seat and shared his space with a couple packages when they drove off.

Most of the customers seem to know each other. They nod their greetings and stand around chatting while Mark, with no change in tempo, takes care of each in order of their arrival. A steady buzz of conversation, mostly about bees, ensues while like a queen bee, Mark runs the show all the while participating in several on-going conversations at once.

Inside the large, high-roofed garage there is enough room to stand in a small circle amidst various wood-working tools and piles of not-yet-assembled hives. You can buy the parts and assemble the boxes yourself or, for additional money, have Mark put them together. A group of five or six of us stood among the heaps of boards and saws. A layer of sawdust covered everything and the place smelled of fresh cut boards. One old timer asked Mark, as he passed by, if he had any “appa pie.” Mark nodded eagerly, rocked back on his heels, as is his way, and smacked his lips. “Oh, yes I do. I do have appa pie.” Knowing looks were exchanged all around and heads nodded in appreciation. Men in the group spoke quietly of the appa pie, which I took to be apple pie, but the enthusiasm for pie, given that we were in a woodshop and not a bakery, struck me as oddly out of place. It was then I noticed a mason jar that had appeared mysteriously and was making its way around the circle. The quart jar was filled nearly to the top with a clear liquid with a slight yellow tinge. When the jar got to me, the obvious naïve outsider, an old-timer nodded and explained. “Moonshine. With apples.” The stuff went down oh so smoothly and brought a gentle warmth on a chilly spring morning. No wonder the old-timers didn’t mind the wait.

The first winter my bees died. Both hives. Queen failure in one. I’m not sure about the other. Now as our unusually long winter grudgingly begins to loosen its grip (it’s snowing as I write), it’s time to go out and check my bees. Hopefully, they made it through the winter. If not, the discouragement will be real; although, I suppose that would give me an excuse to head over to Mark’s place. Maybe advice from the old timers and a sip or two of appa pie will fortify my resolve to be a bee-keeper for the long haul.