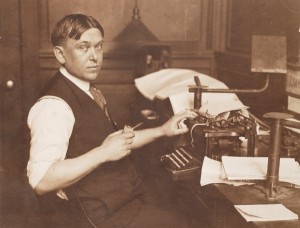 I’m late to this, but have been spending the last few weeks of the summer break gorging on episodes of David Simon’s acclaimed HBO series “The Wire.” It is a fiercely gritty, profane, violent, tough-minded look at the inner workings of the city of Baltimore in its death-throes. The series is smart and sad, one in which people are more often than not trapped by a combination of circumstance and bad and worse choices.

I took an interest in watching the series after hearing excerpts from Simon’s testimony this past Spring before the Senate on the state of the newspaper business in America. His testimony – like the series he created – was fierce, defiant, and brutally honest. What strikes one about reading this testimony is how thoroughly he shatters the contemporary myth that there’s some kind of inherent antagonism between defenders of the Free Market and an increasingly distant and ungovernable Government. Cheerleaders of the Age of the Internet have urged us to move on from the day of ink-stained hands, and revel in the ushering in of an era of unlimited information. Yet, Simon puts to lie the notion that the internet is any real replacement for the hard, gritty and local work of gathering news.

High-end journalism is dying in America and unless a new economic model is achieved, it will not be reborn on the web or anywhere else. The internet is a marvelous tool and clearly it is the informational delivery system of our future, but thus far it does not deliver much first-generation reporting. Instead, it leeches that reporting from mainstream news publications, whereupon aggregating websites and bloggers contribute little more than repetition, commentary and froth. Meanwhile, readers acquire news from the aggregators and abandon its point of origin – namely the newspapers themselves.

In short, the parasite is slowly killing the host.

It is nice to get stuff for free, of course. And it is nice that more people can have their say in new media. And while some of our internet commentary is – as with any unchallenged and unedited intellectual effort – rampantly ideological, ridiculously inaccurate and occasionally juvenile, some of it is also quite good, even original.

Understand here that I am not making a Luddite argument against the internet and all that it offers. But democratized and independent though they may be, you do not – in my city — run into bloggers or so-called citizen journalists at City Hall, or in the courthouse hallways or at the bars and union halls where police officers gather. You do not see them consistently nurturing and then pressing sources. You do not see them holding institutions accountable on a daily basis.

Why? Because high-end journalism – that which acquires essential information about our government and society in the first place — is a profession; it requires daily, full-time commitment by trained men and women who return to the same beats day in and day out until the best of them know everything with which a given institution is contending. For a relatively brief period in American history – no more than the last fifty years or so – a lot of smart and talented people were paid a living wage and benefits to challenge the unrestrained authority of our institutions and to hold those institutions to task. Modem newspaper reporting was the hardest and in some ways most gratifying job I ever had. I am offended to think that anyone, anywhere believes American institutions as insulated, self-preserving and self-justifying as police departments, school systems, legislatures and chief executives can be held to gathered facts by amateurs pursuing the task without compensation, training or for that matter, sufficient standing to make public officials even care to whom it is they are lying or from whom they are withholding information.

We should note that GUMMINT and INDUSTRY alike are only too happy to see those bothersome reporters dwindling, replaced now by internet news-spinners who will soon have very little news to actually spin. Yet, Simon also points out in his testimony that what really killed off the papers was not the internet.  The internet has decimated what was left of a dying business, but what originally sent the papers into a death spiral was none other than the cowboy FREE ENTERPRISE of the 1980s and 90s.  What killed the papers were the demands of stockholders to “unlock the value” that lie dormant in newspapers that were otherwise content to make a slow, steady and regular profit, rather than the 10% or more annual returns that were being promised every month in the pages of Kiplinger’s magazine. So, Simon testified, the “investors” went after the body of the newspapers until only a carcass was left:

In fact, when newspaper chains began cutting personnel and content, their industry was one of the most profitable yet discovered by Wall Street money. We know now – because bankruptcy has opened the books – that the Baltimore Sun was eliminating its afternoon edition and trimming nearly 100 editors and reporters in an era when the paper was achieving 37 percent profits. In the years before the Internet deluge, the men and women who might have made The Sun a more essential vehicle for news and commentary – something so strong that it might have charged for its product online – they were being ushered out the door so that Wall Street could command short-term profits in the extreme.

In short, my industry butchered itself and we did so at the behest of Wall Street and the same unfettered, free-market logic that has proved so disastrous for so many American industries. And the original sin of American newspapering lies, indeed, in going to Wall Street in the first place.

Economically, the disconnect is now obvious. What do newspaper executives in Los Angeles or Chicago care whether or not readers in Baltimore have a better newspaper, especially when you can make more putting out a mediocre paper than a worthy one? The profit margin was all. And so, where family ownership might have been content with 10 or 15 percent profit, the chains demanded double that and more, and the cutting began – long before the threat of new technology was ever sensed.

But editorially? The newspaper chains brought an ugly disconnect to the newsroom, and by extension, to the community as well.

A few years after the A.S. Abell Family sold The Sun to the Times-Mirror newspaper chain, fresh editors arrived from out of town to take over the reins of the paper.

They looked upon Baltimore not as essential terrain to be covered with consistency, to be explained in all its complexity year in and year out for readers who had and would live their lives in Baltimore. Why would they? They had arrived from somewhere else, and if they could win a prize or two, they would be moving on to bigger and better opportunities within the chain.

So, well before the arrival of the internet, as veteran reporters and homegrown editors took buyouts, newsbeats were dropped and less and less of Baltimore and central Maryland were covered with rigor or complexity.

In killing off the local connection between the news reporters and the city it covered – by obeying the abstract demands of placeless stockholders who couldn’t give a rat’s ass about Baltimore and the out-of-town editors whose mandate was to cut costs – no one in the places where newspapers were being published any longer had any real reason to buy fluff filled with AP stringer reports.  By breaking the local tie, the citizens of places like Baltimore ceased to know and be given a key to understanding their city, and the internet wasn’t going out and hiring any new beat reporters to haunt the pubs where the pols and police hang out.  And, as a consequence, both the corporate and governmental powers can breath easier that fewer reporters will be sniffing around their increasingly unpatrolled activities.  Meanwhile, the citizenry will congratulate itself on all the information it is receiving over the internet and through the television set.  1984 meets Brave New World.

Tocqueville argued that one of the necessary conditions for the flourishing of mass democracy was the existence and persistence of newspapers and a public that attentively read the news.  With the death of our newspapers, stories about democracy may be moving from the front section to the obituary pages.  Soon our news will come from nowhere in particular, and we will descend further into the ignorance that is an endemic condition of our increasingly abstract and placeless lives.