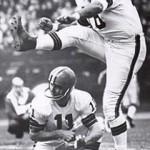 My father played for the Philadelphia Eagles. He didn’t particularly want to: In 1933, 1934, and 1935 the Eagles were a new “franchise” in the National Football League and not likely to win very many games. Their coach, Lud Wray, had been Dad’s coach at Penn, and wasn’t very inspiring. Pro football contracts weren’t glamorous in those days; in fact, very few players had contracts. They played by the game, and got paid in cash after the game.

Dad, Osbern Putnam Willson (“Diddy,” he insisted that his friends call him), was an exceptional athlete. He regularly won both the 100-yard dash and the shotput in track meets. At 5’9” and 215 pounds he could jump and grab a basketball rim. He played water polo and lacrosse at the University of Pennsylvania, in addition to football, and he once beat the 1932 Olympic 100-meter champion in a 50-yard race. He could also beat you at ping-pong, checkers, or knocking beer cans off the back fence with a slingshot.

He wanted his sons to play golf, tennis, bocce, or anything but football. We, of course, wanted to play football. That being the case, he taught me to kick a football over our backyard swing when I was nine years old. He hung a tire from a tree the same year and told me to throw a football at it or through it at least a hundred times a day. He was proud that his sons played tackle football without pads in the lot across the street from our house. One end zone was a gravel driveway. One sideline was a concrete sidewalk, and the other a hole about ten feet deep.

Dad’s idea was simple: If we wanted to play a violent game, we should be ready to play a violent game. He hoped we would not love it, but all three of us did. None of us could match his ability, but we learned life lessons that even Churchill’s playing fields of Eton could not top. One of them, in my case, was learning to kick an American football.

In our little town of “PhelpsNewYorkHomeoftheBrave” (Dad’s exclamation upon our first arrival), nobody but Dad knew how to teach boys to kick over the swing set. High school football extra point conversions in the 1940s and 1950s averaged about 25 percent, and most of the successes were not from kicking. Dad figured that if I could kick and throw, coaches would find a way to get me on the field. As a fourteen-year-old I was 5’11” and 175 pounds and could run and jump, so I figured I was all set for the second generation of Eagles players in the Willson family.

Dad also remembered the traveling salesman of football kicking. His name was Leroy N. Mills. Leroy wore a fedora, always a shirt and tie, usually had a pipe (unlit) in the left side of his mouth, and never changed into football shoes. He moved from campus to campus after he retired from his very successful business career, guaranteeing that he could teach punters to kick the American football fifty yards from the line of scrimmage, and out of bounds within the five-yard line; and almost anyone to drop-kick or placekick extra points or field goals at a rate of over four out of five.

Mr. Mills wrote a book, Kicking the American Football, in 1932 (revised in 1936), which is still the best book ever written on the subject. Dad remembered that he had written something, but Ollie Cook, who was a great football coach at Phelps Central School, actually had it on his shelf and gave it to me just before I tried out for his six-man football team in 1954. Mr. Mills was dead by that time, but I studied his book almost as hard as I had to study Latin. Two images stayed in my mind.

The first was a picture of Frank Carideo finishing a punt. Carideo was the Notre Dame quarterback who guided Knute Rockne’s last two teams to victories over Penn, when Dad got New York Times headlines for running back punts. Carideo hit two that were uncharacteristically short. The picture in Mills’s book shows the 5’6” Carideo with his left foot still on the ground as he followed through on a punt with his kicking foot about fifteen inches above his head. I have a picture of me at the age of thirty-five following through on a placekick in a rugby game, 58 yards, with my foot at least six inches above my head.

The second image is of a test Leroy Mills gave every kicker. Blind him with a bandana tied securely around his eyes and hold him squarely on the left hash mark of the football field. Tell him to walk straight for fifty steps on his count. Tell him how important it is that he concentrates and walks straight. Mr. Mills believed that this is the only true test of God-given balance, and balance is the only quality that is both necessary and sufficient for truly great kicking. I’ve had young men walk in complete circles. Nobody has ever stayed within ten yards of the hash marks. Balance is a rare commodity and must be cultivated.

Oh, and I didn’t mention that my 58-yard kick (I kicked eight over 55 yards that year) was straight-on. It was before the Gogolak and Bahr brothers revolutionized kicking the American football. The ghosts of Lou Groza, Jim Bakken, Jim Turner, Tom Dempsey, George Blanda, and Mark Moseley still haunt me.

Alex Karras, the free-spirit wild man of the Detroit Lions, started showing up on late-night TV in the late 1960s. He told Johnny Carson that all these little foreign guys crawled on to football fields saying, “I keeeck a touch-down! I keeeck a touch-down!” Soccer replaced foot-ball.

Chester Marcol was probably the best of all the soccer players who rewrote football kicking records. He was a Polish immigrant to the Thumb of Michigan, and Hillsdale College’s legendary coach Muddy Waters picked him off before the big-timers knew what the new kicking was all about. Chester smashed the football. He hit one from 62 yards in college and never missed a PAT. He stormed the NFL in Green Bay until high-groin and alcohol injuries cut him short. He taught me how to teach soccer-style placekickers in about fifteen minutes in the fall of 1976, and since then I have had only one guy who kicked the ball straight.

“I keeeck a touch-down” guys are mostly head cases, or at least their coaches are. The reason is simple: They aren’t football players, they are kickers. The best field goal I ever saw was Pat Summerall’s 49-yarder that beat Cleveland in 1958. It was in the snow, and it would have been good from at least 70. And that was before they expanded the goal posts to make sure the soccer guys had a chance to curve it in from about fifteen feet wide right. Pat was a tight end; Jim Bakken was the Cardinals’ backup quarterback; Lou Groza was a perrenial all-pro tackle; George Blanda was, well, George Blanda. Who was Garo Ypremian? Or even Adam Vinatieri?

Your direction is gone.

Does balance come from the side? Just as we don’t kick from the fourteen-meter line, we probably shouldn’t give in to the European kicking style. Although I guess we have, without thinking about it very much. And by the way, I never got beyond 5’11” and 175 pounds. But I kicked the ball pretty well in the St. Louis rugby league. Straight. And Lou Groza was the best placekicker ever. Ever.

Oh When the Saints (Come Marching In)