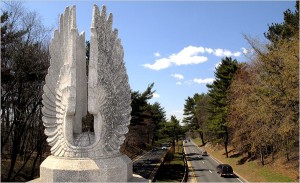 For readers tuning into the comments  sections of FPR (where some of our best material lies), there was an extremely interesting and instructive discussion of the cost, and more generally the problem, of roads – specifically, interstate highways – that unfolded in comments section in a post by John Medaille.

That discussion, along with the general disapproval for cars and highways that is often evinced here on FPR,  was floating about in my head as we drove home from a visit with family in Connecticut over the weekend.  We were driving along the Merritt Parkway, which I have long regarded as one of the most pleasant and enjoyable drives in the nation.   I spent that portion of the otherwise execrable drive (mainly along Interstate 95) engaged with my children in observing the different designs of all the bridges that span the Merritt Parkway.  I’ve always admired the thought and design that went into the bridges, and a bit of sniffing around once we arrived home confirmed some suspicions:  the bridges were designed by one man (George Dunkelberger – a State employee, no less!), and according to a plan in which no bridge would be the same but all would be recognizably guided by a single vision.  (Architects who read this blog – and there are not a few – will doubtless have some critical words to say about the non-classical design of the bridges.  I, for one, have always admired the neo-romantic Art Deco style, which clearly influenced not a few of the bridges.  This is not to say that I admire all of them, but I admire above all the thought, craft, and effort to please the senses that went into their design and execution.  More anon).

But there’s more:  it turns out that in building the Parkway, enormous effort and expense was expended not only in leaving trees in the median and beside the road intact (providing a lovely canopy as one drives), but in carefully digging out the trees along the eventual roadway and re-planting them once the road had been constructed.

Now, there can be no doubt that in many ways too many roads, too many cars, and too much far-flung development has been a plague upon the land.  But, the Merritt Parkway is at the very least an interesting testimony to the staying-power of a certain ethic of care, respect for human scale, and belief in the centrality of aesthetic beauty (that is, that which is not merely reducible to utility) that evidently informed its design and building.   The effort and expense that went into the design and building of the bridges (and the landscaping) reflects a pre-automobile ethic in which we expected to have to live for a long time with the things that we built, and hence invested those parts of our built environment with care and attentiveness.   It reflected the belief that we ought to strive to create things of permanence and beauty, not mere utility at the least expense.   It reflected the too-fleeting view that something like driving was meant to be a way of experiencing the world, the natural beauty of our native places (hence an attentiveness to planting native trees and plants), not merely the quickest way to get from placeless Point A to deracinated Point B.

Ironically, it was the expansion of the car empire and the transformation of our landscapes to accomodate the automobile and its effluvia that contributed mightily to the destruction of that ethic.  Yet, for a time at least, that older ethic of care, design, beauty and permanence pervaded even the building and design of our highways.   Today, in building, we aim only for the most efficient, least expensive and – by definition – ugly and disfiguring.  Our highways, suburbs and strip malls are monuments of our degraded taste and obsession with efficiency at the cost of human excellence and beauty. 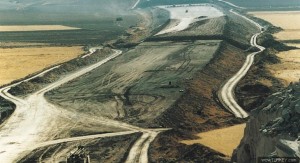 Almost unwittingly, without extensive discussion or reflection as a people, we have surrounded ourselves with ugliness and degradation.  We have been satisfied with very low standards until we no longer are able to recognize any alternative.  We ask our young men and women to sacrifice themselves for the sake of the nation and its freedoms, all the while agreeing to degraded definitions of what constitutes freedom (most often in terms only recognizable to consumers who seek out everyday low prices).  Even those who today travel along the Merritt Parkway are likely to race along at speeds that make any appreciation of its beauties unrecognizable, while more than a few families we saw were content to distract their children with videos from overhead screens rather than remarking upon the uniqueness of the parkway.  We are, in short, content with so much ugliness when we are clearly, or at least once were, capable of so much better.  Even our roads and highways could be things of beauty, meant to please, to delight, and to last – meant to be driven upon slowly and with appreciation for the world.  Cars and roads are to be with us for time foreseeable, but must we needs accept the expansion of ugliness into every corner of our lives?  Why do we ask so little of ourselves and of each other?  How did we come to this pass?