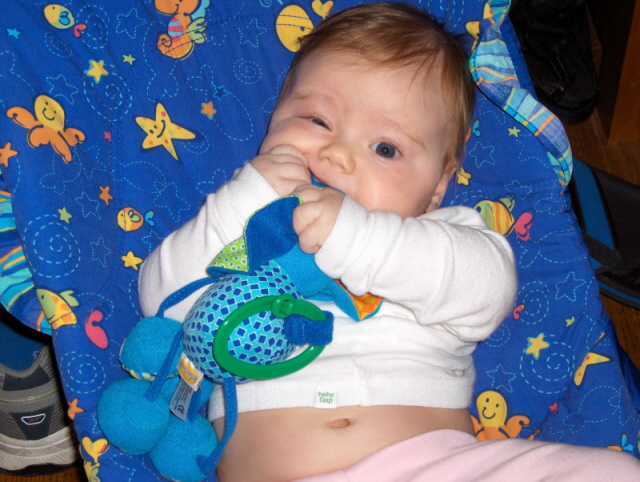 Devon, PA.  This week marks my daughter’s third birthday.  As a way of tossing a little Front Porch confetti her way, I reprint here  “A Prayer for Livia Grace at Christmas,” which originally appeared in Modern Age (Spring 2008).

There’s little room left in this house for poetry,

Or in this world for any lasting language.

The managers and sales reps in the office

Who’ve ticketed their holidays are childless,

And looking toward five days of sun and liquor.

They know nothing of old books or a young daughter.

But somehow near me sleeps an infant daughter

Who grows still to the cradle sounds of poetry,

Eyelids dropped in the promise of sleep’s liquor.

It charms her, yet she knows nothing of language;

Nor did I, in a way, when I was childless,

Preoccupied with filling another office

Than fatherhood.  Now crowded in my office,

A crib and tall chest of drawers for my daughter

Remind me that this empty room sat childless

Except for those squat ink-littered sheets of poetry,

When “child” was just a word and my child language,

Which I would write and read at night with liquor.

Now she’s born, we have little time for liquor

And my desk’s crammed in a corner of the office,

My papers lost beneath the brighter language

Of cardboard colored alphabets for my daughter.

I’m sure I wrote a different kind of poetry

When all my hours were filled though I was childless.

The TV news shows that, because they’re childless,

Exercise, and avoid cigarettes and liquor,

Controlled and self-absorbed as fits the office

Of sonnets or sestinas; their only daughter

An iPod or such ephemeral techno-language.

I pray, my daughter, speak another language,

That in the richest sense you not be childless,

Your every act a kind of lasting daughter

More beautiful than bored clerks at their liquor.

Though they find no room for it at the office,

May you crowd your small corridors with poetry.

My daughter’s teething and needs her gums rubbed with liquor,

Which stops my language, calls me from my office.

I go.  May I have more of this child, less poetry.

The Bridge and the Breach: A Review of Indigenous by Jennifer...