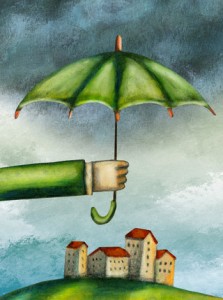 It has been a year since the collapse of Lehman Brothers, and the subsequent near-collapse of the international economic system followed quickly by the massive increase of (at least visible) central government presence in nearly every aspect of our economic lives.  In spite of this period of time that might permit reflection on these events, it seems we have yet to do a real accounting of the causes of this crisis and thus discern a true path to mitigation of the factors that precipitated those days and months of panic and this long period of simultaneous quiescence and discontent.   Perhaps at the deepest level, our inability to actually achieve a true accounting is the actual source of the crisis.  For to do so would require us to speak in terms of character and sin, and to eshcew our accustomed public language of technique and method.

As legislators speak of new regulations of the financial industry (even as we find out daily that the problem lie more in the lack of real enforcement, as well as the ability of the industry and government to change existing regulation when it proved onerous for profits and campaign contributions), and as people in the industry mouth their commitment to changing their ways, those with eyes to see discern that nothing has changed because at base our behaviors are being influenced and even governed by a set of systemic and deeply embedded assumptions about the nature of human society.   We remain profoundly committed to an economic and political system of abstraction, one that begins at the most basic level by generating as many externalized costs as possible in order to give the highest degree of immediate pleasure and satisfaction to the soveriegn self who happens to live now.  It further extends in our manipulation of nearly every social mechanism – schools, living arrangements, economic frameworks, work, entertainment, parenting, even death and burial – that creates distance between us, that renders those relationships normalized, homogenized, abstracted, theoretical, de-personalized.   We accede to the destruction of places, of history, of cultures and traditions because we cease to perceive any real connection to them – we are exceedingly good at erecting museums to what we have lost, but very bad at actually retaining anything of lasting value.

And so we learn, and should not be surprised, that very little has changed.  We learn, for example, that a year after government extended its tentacles ever more deeply into the economic system to prevent the failure of institutions so large that they would have created systemic implosion, that many of the nation’s leading financial institutions are even bigger than when the crisis began.  And why wouldn’t any rational player not seek to be as big as possible, when the lesson clearly to be drawn from the past year was that the bigger you are, the more likely that the government will bail you out if you land in trouble.  Thus, the bigger you are, the riskier you can behave, and presumably, the more money you can make – at least in the short term, which is all that matters in the age of the quarterly report.

We also learn that our economic system remains addicted to the peddling of “financial products” that reflect no real value in reality.  This should have been one massive take-away from the events of the past year – a fundamental reassessment of what an economy is for – whether it exists to help create and deliver the basic goods of life necessary for “mere life,” which then allows for the opportunity to achieve “the good life” in ways that are not solely dependent on the material goods that an economy can provide (rather, that come from our relationships with our families and our communities, particularly the gifts of fellowship, our shared capacity to instill a deeply embedded set of virtues in each new generation, our opportunity to worship together in gratitude to the source of our blessings); or whether an economy exists to allow maximum extraction of profit by any means necessary, particularly if we can effectively get something for nothing.

The most recent “financial product” that reflects our commitment to the latter – and particularly, the divorcing of an economy of real value from an economy of falsified and abstract moneymaking – was disclosed in an article in this past Saturday’s New York Times.  There it was reported that financial wizards have cooked up a new financial scheme in which life insurance policies of elderly people are purchased for a percentage of the actual face value of the policy, and then “bundled” as securitized “investment” vehicles.   According to the article,

The bankers plan to buy “life settlements,” life insurance policies that ill and elderly people sell for cash — $400,000 for a $1 million policy, say, depending on the life expectancy of the insured person. Then they plan to “securitize” these policies, in Wall Street jargon, by packaging hundreds or thousands together into bonds. They will then resell those bonds to investors, like big pension funds, who will receive the payouts when people with the insurance die.

The earlier the policyholder dies, the bigger the return — though if people live longer than expected, investors could get poor returns or even lose money.

Either way, Wall Street would profit by pocketing sizable fees for creating the bonds, reselling them and subsequently trading them. But some who have studied life settlements warn that insurers might have to raise premiums in the short term if they end up having to pay out more death claims than they had anticipated.

The idea is still in the planning stages. But already “our phones have been ringing off the hook with inquiries,” says Kathleen Tillwitz, a senior vice president at DBRS, which gives risk ratings to investments and is reviewing nine proposals for life-insurance securitizations from private investors and financial firms, including Credit Suisse.

Of course, our best and brightest have learned nothing from recent history:

“We’re hoping to get a herd stampeding after the first offering,” said one investment banker not authorized to speak to the news media.

What this “investment product” will effectively generate is the hope and even subtle efforts to increase the likelihood that policy-holders will die early.  It will pit a portion of the “investment community” against the sick and elderly, and foster a widespread sentiment that someone’s premature death will help to increase my bottom line.  Because these already abstract policies will have been securitized, it won’t matter that we’re talking about someone’s father or grandmother or friend or lover.  All that will matter is that my rate of return be incrementally increased.  As with the recent mortgage debacle, I am required to know nothing about the people who hold the mortgages; our relationship has been rendered abstract and distant, and my only basis of judgment about the propriety of those loans is my wager that I will receive an outsized return on investment.

What’s striking about this newest “product” being cooked up by our financial wizards is its ultimate perversion of the original idea of insurance.  Everything that is touched by our contemporary mode of abstraction and de-personalization turns to mud.  In this case, insurance – which began as a form of communal care and even charity – is turned into an instrument that not-so-subtly induces us to wish for another’s premature death.  Here is Stephen Marglin from his truly excellent book The Dismal Science: How Thinking Like an Economist Undermines Community.

Like fire insurance, life insurance and health insurance were originally embedded in community, and the evolution of insuring human being is particularly instructive.  In medieval and early modern Europe, gulds provided assistance to members who had fallen on hard times as well as to widows and children of members who had died.  Confraternities were religious devotional societies but also much more: they provided care in sickness and death, and indeed beyond the grave, providing funds to say masses that would ease the passage of the departed through purgatory.

Insurance, particularly for the confraternities, was closely allied to charity.  Members’ claims took precedence, but most confraternities extended material as well as spiritual support to the poor of their communities as well as their own members.  Although looking back we can easily identify mutual insurance as a separate and distinct reason for confraternities, in the premodern European setting, insurance charity, and spiritual consolation were a piece.  And though it may strike the modern mind as odd that death benefits would include insuring the progress of the soul out of purgatory, it would have struck the medieval mind as odd to separate insurance for the here-and-now from insurance for the hereafter.  (14-15)

While this original source of insurance may seem too historically distant to be of relevance to us, Marglin notes that even into modern times, the way a community insures itself against risk reveals most deeply its self-understanding:

The example of insurance may appear to be somewhat random, but it is in fact not.  The Amish, perhaps unique among twenty-first century America in their attention to fostering community, forbid insurance precisely because they understand that the market relationship between an individual and the insurance company undermines the mutual dependence of the individuals.  For the Amish, barn raisings are not exercises in nostalgia, but the cement that binds the community together.”  (18-19)

What, then, of a society whose next “evolution” in insurance is its “securitization” so that “investors” can make a quick and painless profit, at once encouraging the elderly to spend the money now (they are the knowing accessories of this scheme, like those people who accepted the easy money in the form of sub-prime mortgages), while creating a widespread societal cheering squad for the quick death of policy-holders.   What should be evident to us was that our all-too-recent financial crisis was not itself a “disease,” but a symptom of a deeper pathology whose diagnosis still eludes us, so deeply does it lie in the DNA of our increasingly sick society.

The Market Made Me Do It (Part I)